Two teams have advanced to the semifinals of the Dusty Rhodes Tag Team Classic!

With the Creed Brothers having won the men’s edition of the Dusty Cup on last week’s NXT 2.0, it’s time for the women to have their turn in the prestigious tag team tournament.

Prior to the first match of the Dusty Rhodes Tag Team Classic, Women’s Tag Team Champions Toxic Attraction cut a promo in the Toxic Lounge and stated that they’d be watching the entire tournament. They were confident that no matter who won, they wouldn’t be unseated as champions.

The first of the tournament matches saw Kay Lee Ray and her unlikely partner of Io Shirai take on the duo of Amari Miller and Lash Legend. Despite the newcomers’ best efforts, the former NXT and NXT UK Women’s Champions prevailed as experience won out.

In the second tournament bout of the night, Diamond Mine’s Ivy Nile looked to join her teammates the Creed Brothers in winning a Dusty Cup as she fought alongside partner Tatum Paxley. The two took on the established team of Kacy Catanzaro and Kayden Carter. While Ivy Nile and Tatum Paxley looked impressive in the bout, experience once again played a role, and Kayden and Kacy were victorious.

After the match Ivy Nile attacked her tag team partner in anger over their loss, but was called off by fellow Diamond Mine member Roderick Strong.

The full bracket for the Women’s Dusty Rhodes Tag Team Classic can be seen below: 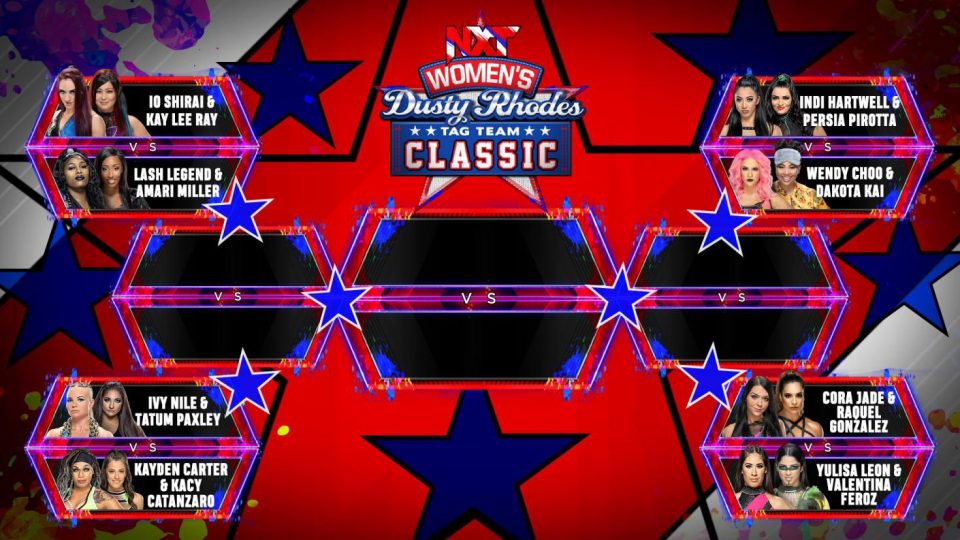