Hannifan recently joined IMPACT Wrestling, making his debut at their Hard To Kill event. Previously he was better known as Tom Phillips in WWE for nine years where he announced on every show that the company produced at the time.

Speaking to his new IMPACT colleagues Doc Gallows and Karl Anderson on their Talk’N’Shop podcast, Tom Hannifan discussed themed shows to mark holidays such as Halloween and Christmas that WWE produces. According to Hannifan, despite an appearance from Santa or someone getting a pumpkin to the head, the announcers ended up banned from getting involved in any costume fun:

“Obviously, announcers don’t really wear costumes, at least predominately in WWE. NXT they get away with it or did get away with it. When I was there, it was Byron Saxton who ruined outfits like costumes at Christmas and Halloween for the announcers. He is a very festive guy. I want to preface this, I love Byron Saxton. He is a saint and going to heaven. [He’s nicer than] anyone in wrestling.”

“There was a Halloween edition of Raw with the Okerlund set up for the desk. It’s (Michael) Cole, (Corey) Graves, and Byron. Graves wore the David S. Pumpkins suit from the SNL [Saturday Night Live] sketch. He wore it a week or two after the sketch, so it was timely as all hell. Of course, he rocked it.” 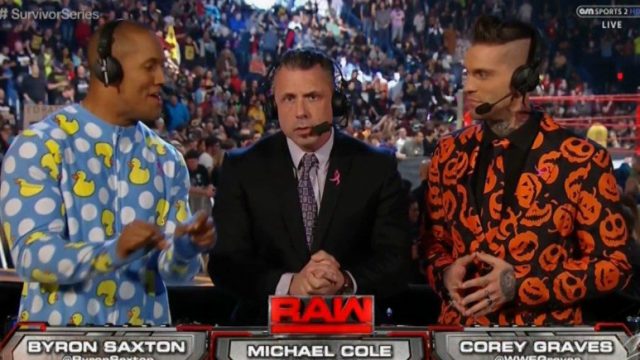 “Byron wore a onesie. A bright, powder blue ducky onesie with footsies. He’s sitting there, on camera, so you can see their feet to the point that, after that, the edict was put out, ‘No more costumes for announcers.’ Ruined all the fun for us.”