The Undertaker was at Raw on Monday night but it was his daughter who left the WWE Superstars on the show in no doubt as to who’s side she’d take in a fight.

Monday’s episode of Raw emanated from the American Airlines Center in Dallas, Texas. The night after Money In The Bank had a night after WrestleMania feel as the show saw returns and its fair share of surprises.

The night began, the way Money In The Bank had ended with John Cena in the ring receiving a rapturous reception. Cena launched a verbal assault on Roman Reigns before telling Reigns that he’d see him at SmackDown.

Keith Lee returned to Raw after six months of inactivity as he answered WWE Champion Bobby Lashley’s open challenge. Lee was soon dispatched by Lashley with a bigger surprise yet to come. With Bobby Lashley given barely anytime to celebrate with MVP, a familiar beat could be heard in the arena as Goldberg made his return to the company to tell Lashley “I’m next!” Goldberg had not been seen in WWE since the 2021 Royal Rumble where he challenged Drew McIntyre for the WWE Title.

Charlotte Flair and Rhea Ripley met once again in a Money In The Bank rematch. This time with Flair going in as champion as she defeated Ripley for the Raw Women’s Title on the previous night. Flair came out victorious once again but was left in such a state after the grueling match that the new Miss Money In The Bank Nikki A.S.H picked her spot. Nikki A.S.H cashed in her contract and finished Flair off with a cross body from the top rope to claim the top women’s prize on the red brand.

All of this and more was being watched by former WWE Divas Champion Michelle McCool and her daughter, whose father just happens to be one of WWE’s all-time legendary competitors, The Undertaker. And their little girl did them proud, holding up incredible signs that perhaps only she could get away with which McCool shared on social media. 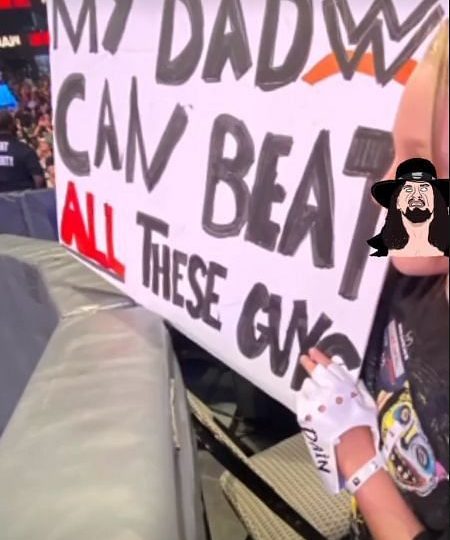 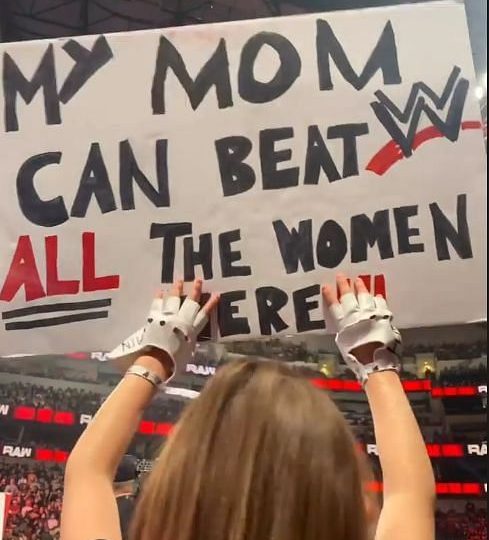 In the interests of accuracy, the male WWE Superstars that competed on Raw were The Viking Raiders, Riddle, Omos, AJ Styles, John Morrison, Jaxson Ryker, Elias, Sheamus, Humberto Carrillo, Bobby Lashley, Keith Lee, Jeff Hardy, and Karrion Kross. Of those stars, The Undertaker has faced Styles, Morrison, Elias, Sheamus, Lashley, and Jeff Hardy. The Undertaker does indeed hold wins over all those men.

Of the five women that competed on Raw, Michelle McCool has only shared the ring with Tamina, Nia Jax, and Natalya. The bouts featuring Nia Jax or Tamina were Royal Rumble matches or battle royals but McCool has a longer history with Natalya. The two women faced numerous times over each other’s careers, with Natalya’s one Divas Championship run coming when she defeated McCool and her LayCool teammate Layla in a handicap match at Survivor Series 2010.