As Money in the Bank announced its new venue, the stars appearing in the advertisement also seem to have changed.

During SummerSlam 2021, it was announced that the event would be held at Allegiant Stadium in Las Vegas, NV in 2022. Tickets went on sale for the July 2nd event back in February, but tickets didn’t sell as well as the company had hoped.

There were allegedly just 16,833 tickets sold for the event. Andrew Zarian of the Mat Men Podcast reported that WWE had hoped for between 28,000 and 35,000 fans to be in attendance for the show, which is a stark difference in comparison to the attendance of the 2021 SummerSlam pay-per-view at the venue. There were over 51,000 fans inside Allegiant Stadium for that event.

WWE sent an email to fans announcing that Money in the Bank would be moving to the MGM Grand Arena instead, and the promotional poster included in the email showed a very different set of WWE Superstars than originally advertised.

WWE sent out the following email to fans that Money in the Bank will now take place at the MGM Grand Garden Arena pic.twitter.com/HC2h4nhpqe

The original poster, as seen below, featured the following WWE Superstars who do not appear in the new advertising: 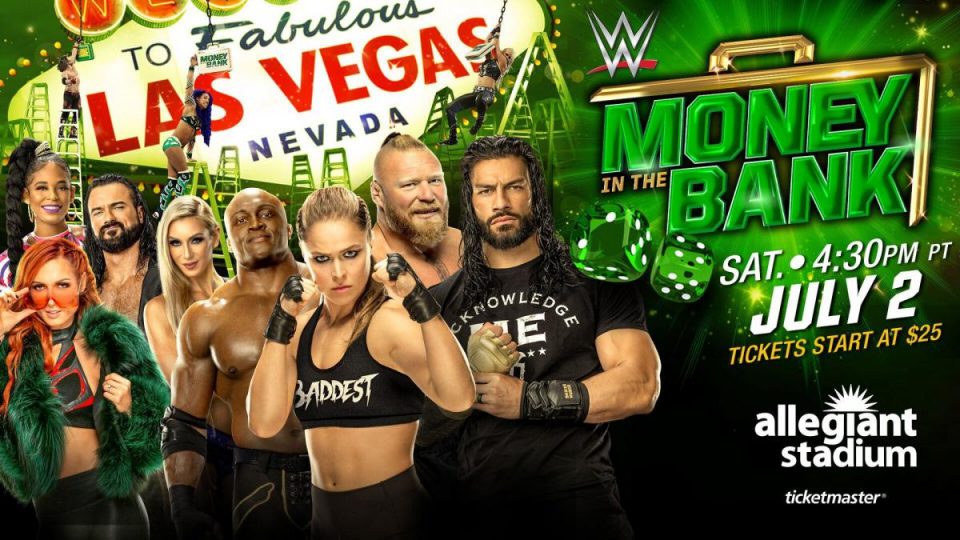 The new poster has replaced these stars with Riddle, Cody Rhodes, the Street Profits, Rhea Ripley, and The Miz. It should be noted that the changes in advertising don’t necessarily mean these stars will or won’t appear at Money in the Bank in July, as the card is far from complete.

Sasha Banks’ exclusion from advertising is to be expected as she and Naomi have been suspended indefinitely after walking out of Monday Night Raw, but there has been no reason given for the other changes made.