Sane competed in the 2016 Mae Young Classic and signed with WWE in 2017. She was part of the NXT roster for two years and defeated Shayna Baszler to capture the NXT Women’s Championship at TakeOver: Brooklyn IV. Sane moved to the SmackDown roster in 2019 where she joined Asuka to form the Kabuki Warriors tag team with Paige as their manager. The pair were WWE Women’s Tag Team Champions for 171 days. Shortly after losing the titles to Alexa Bliss and Nikki Cross, Sane announced that she was leaving WWE to move home to Japan. However, she would remain with the company as their Ambassador in Japan.

The ‘Pirate Princess’ recently celebrated her birthday and posted a message of thanks to everyone who wished her a happy birthday on Instagram.

Several current and former WWE Superstars also gave Sane their best wishes in response to the post. One that stood out was multi-time Women’s Champion Sasha Banks, who said “Happy birthday” before adding “come back”. 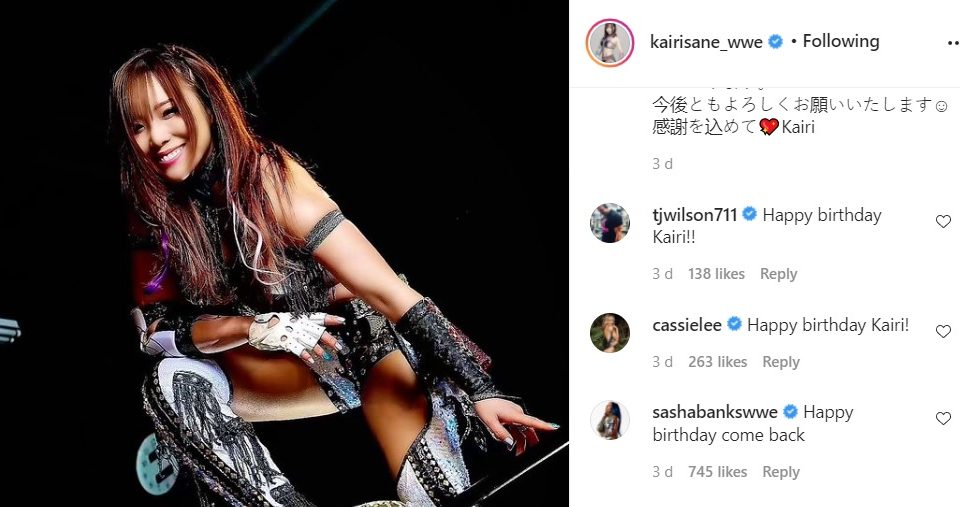 Sane and Banks have met in the ring several times, both in tag team action with the Kabuki Warriors facing Banks and Bayley, and in one singles match which Sane won by disqualification after Bayley attacked her on behalf of Banks.

Sane was written off of WWE TV during the feud between the Kabuki Warriors and Sasha Banks and Bayley when Bayley viciously assaulted her backstage to distract Asuka during a SmackDown Women’s Championship match between the ‘Empress of Tomorrow’ and ‘The Boss’.