In 2008, the wrestling world was shocked when The Ultimate Warrior announced that he was coming out of retirement after a near ten year absence to challenge for a World Heavyweight Championship.

The gold in question was the New Wrestling Entertainment World Heavyweight Championship and the match came about in Madrid, Spain, on April 19, 2008, after Warrior – who was in town to receive an award – and new champion Orlando Jordan had a confrontation following the latter’s victory.

Their championship match was set for June 25 of that year at NWE Summer Tour 2008: Return of the Warrior but there was a problem. The Ultimate Warrior hadn’t been inside a ring since losing an infamously terrible match to Hulk Hogan at WCW/NWO Halloween Havoc 1998. 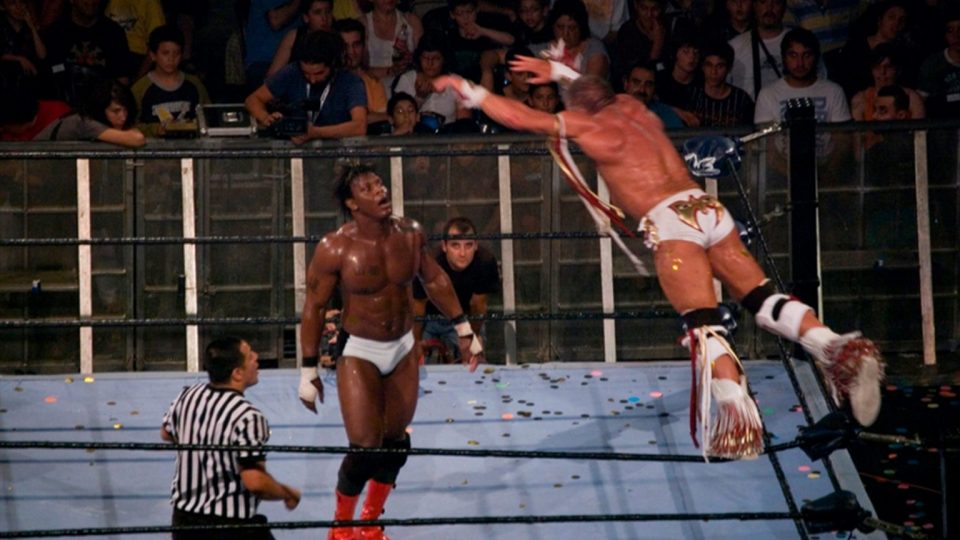 He was out of shape, out of practice and the ring rust was turning a worrying shade of green. In preparation, Warrior turned to one of most lauded talents of our era to train him for the match and that man was former WWE and ECW Champion, Rob Van Dam.

At the time, RVD had just departed WWE and was plying his trade on the independent circuit with such promotions as Reality of Wrestling, Associacao Portuguesa de Wrestling and the company Warrior would compete for, New Wrestling Entertainment.

Now, for the very first time, the former ‘Mr. Monday Night’ has opened up about training The Ultimate Warrior and what it meant to him in an interview with The Hannibal TV:

“It was amazing to me when a mutual acquaintance told me that he really respected my work and wanted to come into L.A. He wanted me to train him because he was getting ready to wrestle again for the first time in 10 years.”

The request came as a shock to RVD because as he explained, the pair had only ever met once and that was on July 22, 1995, at a National Wrestling Conference event when The Ultimate Warrior defeated The Honky Tonk Man in the main event and Van Dam was part of the tag team, Aerial Assault, with Bobby Bradley:

“I didn’t know him at all. I had worked one show with him and I was on the undercard. His wife after he died, she told me … ‘You stuck out to him at that show. He always kept watching you after that throughout the years and he’d always tell me when you were doing really good.’ That was so touching to know that. It’s incredible how full circle all the energy in the universe, how it all works.”

After he orated that their session was less than remarkable with very little wrestling occurring as Warrior wanted to hit the ropes and re-learn the basics, Van Dam recalled one particular moment when the wrestling legend caught him smoking weed when he picked up the former WWF Champion from the airport:

“I rolled down the window a little bit, [lights up a blunt] and I’m driving down the road. He looked over and said, ‘You smoke every day?’ I said, ‘Yeah,’ and we just started talking about it. He was just as cool as can f***ing be.”

The Ultimate Warrior defeated Orlando Jordan to capture the NWE World Heavyweight Championship in another famously awful outing. Sadly, this would be his last.

Shortly after rebuilding bridges with WWE, The Ultimate Warrior was rightfully inducted into the 2014 WWE Hall of Fame and made his final appearance on the April 7, 2014, Monday Night Raw to make what many still refer to as a haunting promo.

Twenty four hours later on April 8, 2014, The Ultimate Warrior passed away leaving behind him a legacy that will never be matched.

Throughout his career, he was never the greatest wrestler or the best on the microphone but he proved to everyone that anything was possible if you always believe.

Credit for the interview transcript: WrestleZone

The Gents are back to talk about SmackDown happenings with Seth & Edge, CM Punk,… Listen

KJ & Oly Return to your earholes, as Oly is FINALLY back from his extended… Listen