Road Dogg has commented on the announcement by pop superstar Demi Lovato that they have come out as nonbinary.

Lovato made the announcement on Twitter, saying that they were also changing their pronouns to they/them.

The full posts from Lovato read:

“This has come after a lot of healing & self-reflective work. I’m still learning & coming into myself, & I don’t claim to be an expert or a spokesperson. Sharing this with you now opens another level of vulnerability for me.”

“I’m doing this for those out there that haven’t been able to share who they truly are with their loved ones. Please keep living in your truths & know I am sending so much love your way xox”

71-year-old radio personality Matt Siegel who hosts Matty In The Morning in Massachusetts had been making comments about Lovato on the morning they made their announcement. Bosses intervened and asked Siegel to stop discussing Lovato and making jokes about them. This led to Sigel ending the show abruptly with the words ‘Matty out.’

In response to an article from The Independent posted on Facebook that had the headline ‘Radio host ‘quits show’ rather than stopping jokes about Demi Lovato being nonbinary’ a user called BG James commented. Brian Girard James is the real name of Road Dogg and it has been confirmed as his account.

The response from James which has since been deleted read:

“Good for him. We have to be bold and stand up against this secularism.” 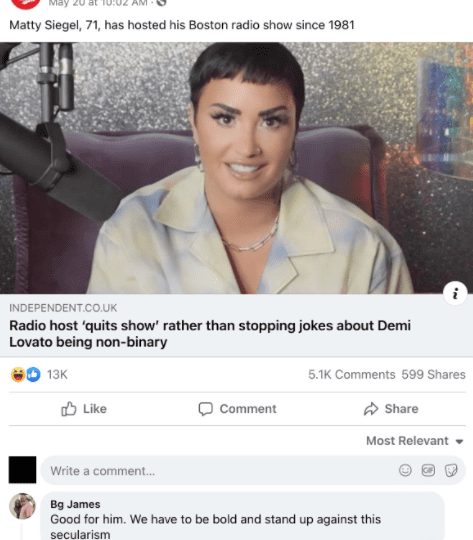 Matt Siegel returned to his radio show on KISS 108 that he has hosted since 1981 the next day after his apparent walkout.