Ricardo Rodriguez enjoyed his appearance in the 2012 Royal Rumble, but it wasn’t until the day itself when Ricardo found out he was going to be in the match.

Speaking to Fightful, Rodriguez explains the backstory, importantly that at the time his “client” Alberto Del Rio was injured. Alberto suffered a groin tear during a 6-man tag match on a Raw SuperShow in December.

That December before the Rumble, Rodriguez revealed it was a conversation at a Cheesecake Factory with WWE Hall of Famer Pat Patterson which sparked the idea.

Alberto was out with an injury he had sustained late December. Fast forward to like a week or two later in Tampa. We had just finished an FCW show and a group of us decided to go to Cheesecake Factory to eat. When we walked in I saw Pat Patterson sitting at the bar by himself.

When everyone went to go sit down I went over to Pat to say hello and offered to buy him a drink. I sat with him for a few minutes and just casually said ‘hey wouldn’t it be funny if for the Rumble, they play Alberto’s music but then I come out?’. We chuckled and just left it at that as I went back to my table.

Several days later we’re stuck in Dallas on a layover because of a storm. I was chatting with (Dean) Malenko and I casually brought up the Rumble spot again. He laughed and said that would be funny and then left it at that. Neither Pat nor Dean mentioned it to me again…then the day came and Michael Hayes told me I was in it!

Not only did he find out he was going to be in the Rumble match itself, but that he’d have a special parody entrance, a nod to the luxury cars that Del Rio would regularly drive to the ring.

The day of the Rumble, I was ringside rolling around and Michael Hayes had asked me if I had seen my car yet. I didn’t know what he was talking about and thought he was referring to my rental car that maybe someone had damaged it or something!

Then he took me behind the Titantron and showed me the car I would be using for the entrance. That’s when he said, ” no one told you?” Umm NO, none one had told me. That’s how I found out! 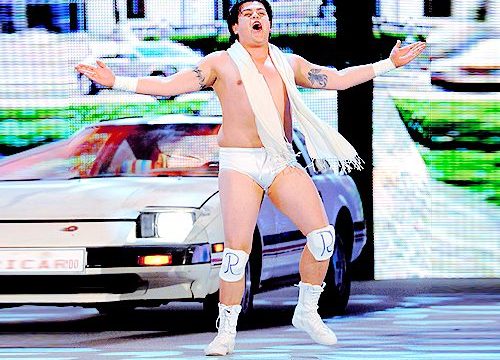 Ricardo Rodriguez entered the 2012 Rumble at #8. He and Mick Foley eliminated Justin Gabriel, after which Rodriguez was unjustly eliminated by Santino Marella.

The 2012 Royal Rumble will forever be known as Sheamus’ year, winning the Rumble match then taking Daniel Bryan’s World Heavyweight Championship at WrestleMania 28 in just 18 seconds.