Former WWE Raw Women’s Champion Rhea Ripley claims that she wouldn’t still be part of the WWE roster if she hadn’t changed her appearance.

Ripley has been a roaring success since joining WWE in 2017. The Australian star blazed a trail in NXT UK as she became the brand’s inaugural Women’s Champion. From there success in the US followed with Rhea Ripley becoming a star of NXT and going on to capture the NXT Women’s Championship from Shayna Baszler in December 2019.

Ripley was a part of WrestleMania 36 where she represented the then-black and gold brand as she defended her title in a losing effort against that year’s women’s Royal Rumble winner Charlotte Flair.

Rhea Ripley almost repeated Flair’s feat in the 2021 women’s Royal Rumble match as she narrowly lost out to eventual winner Bianca Belair. Ripley’s rise to the top was not derailed however as she soon made her debut on Raw and challenged Raw Women’s Champion Asuka to a title match at WrestleMania 37.

On The Grandest Stage Of Them All Ripley atoned for her loss in 2020 and defeated Asuka to become the new Raw Women’s Champion. Despite losing that title at Money In The Bank to her former rival Charlotte Flair, Ripley’s career took an unexpected twist when she began teaming with Nikki A.S.H.

The unlikely duo reached the peak of the women’s tag team division in WWE when they unseated Natalya and Tamina as WWE Women’s Tag Team Champions in September.

However, according to Rhea Ripley herself, all of that could have been very different if she never chopped off her golden locks.

Ripley was responding to a fan account on social media which begged the question:

“What if @rhearipley_wwe kept her long hair?”

Rhea Ripley then replied to the question, with the surprise admission:

“I would have been fired” 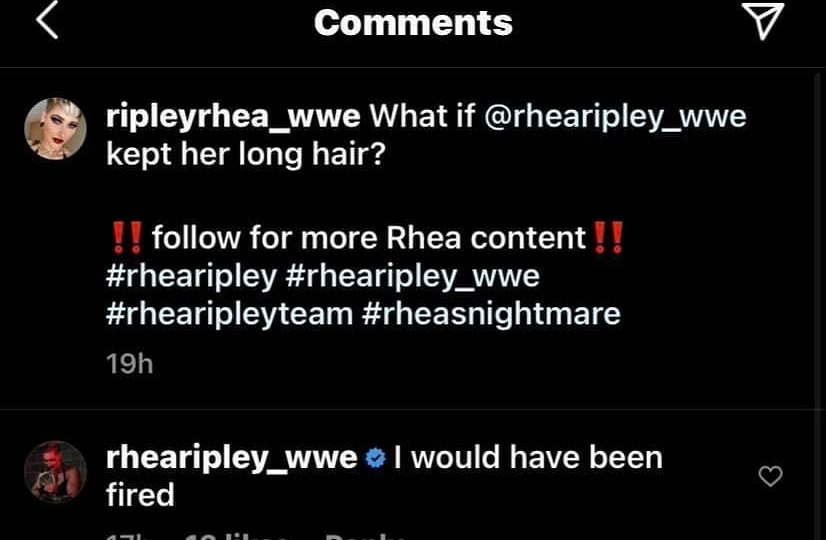