Speculation has abounded about the futures of both Kyle O’Reilly and Johnny Gargano after reports indicated that their time in NXT could be coming to a close. After they both suffered defeats at WarGames, fans looked to the December 7th episode of NXT for clues as to the future of both men.

While nothing is definite, answers seemed to be indicated after the show as both Gargano and O’Reilly took part in a curtain call of sorts. Photos show the pair embracing fellow NXT stalwart Tomasso Ciampa.

Two particular photos show Ciampa and Gargano sitting in the ring in a clear homage to the the time the pair faced each other in the Cruiserweight Classic. Back in 2016, Johnny Gargano was able to defeat his partner in the CWC, and while Tomasso Ciampa initially refused a handshake, he eventually sat with his friend in the ring and raised Gargano’s hand.

End of an Era pic.twitter.com/FEl13yffoZ 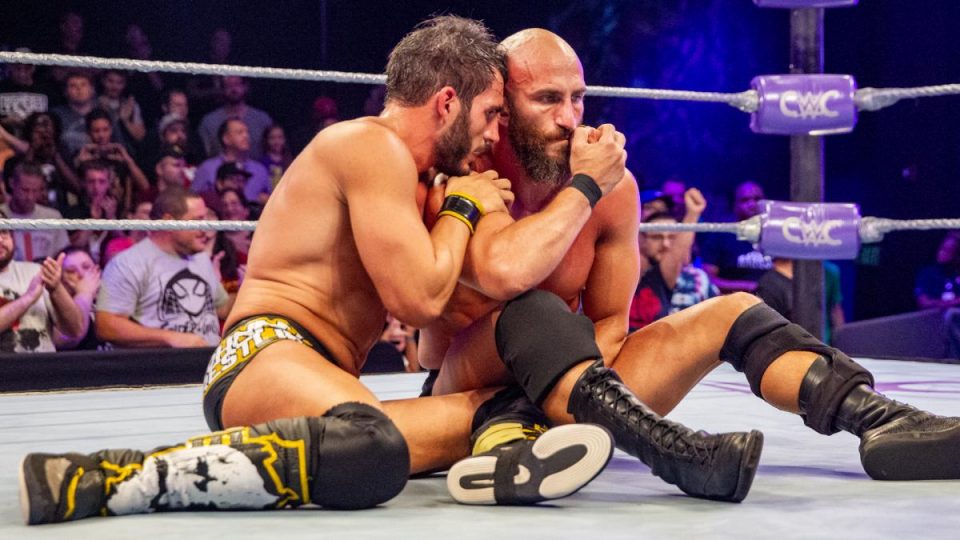 Just before these bittersweet scenes, Johnny Gargano cut a heartfelt promo to the NXT audience, saying that while change was scary, sometimes it needs to happen. He would soon be doing the most important job in the world: being a father to his soon-to-be-born son.

“And I don’t know what my immediate future holds, that’s up in the air still. I may do some things here or there, but I do know one thing for sure. And that’s in February I’m gonna start the most important job of my life. Cause I’m gonna be a dad… [crowd chants Baby Wrestling]

“He’s gonna watch this back one day and thank you all. But I’m so excited for that, because I’m gonna love that little guy so much. But right now the most important thing for me is to worry about Candice, to worry about my son, and show my son… teach him to be the best man that he can be. Because that is….”

Before Gargano could continue, he was viciously attacked by Grayson Waller, who delivered both in-ring chairshots and a powerbomb to the announce table.

.@GraysonWWE pulls the plug on @JohnnyGargano's emotional speech to the #WWENXT Universe.

Earlier in the episode, Kyle O’Reilly faced former tag team partner Von Wagner in a steel cage after the two came to blows at NXT 2.0 WarGames. Von Wagner, not satisfied with his victory in the match, proceeded to assault O’Reilly after the match to put an exclamation mark on the former Undisputed Era member’s NXT career.

While there is no official word on the contract statuses of Johnny Gargano and Kyle O’Reilly, the images from after the show indicate that this may indeed be goodbye for two men who’ve made NXT a household name over the past few years. Inside the Ropes will continue to report on the situation as more information becomes available.