Peyton Royce’s mother has spoken out about being jaded of seeing Charlotte Flair in the spotlight, challenging WWE to give someone else a chance.

On the March 1 edition of Monday Night Raw, ‘The Queen’ Charlotte Flair took to the microphone to state that she wanted to face her partner and friend Asuka at WrestleMania 37 for the WWE Raw Women’s Championship.

The challenge comes after several weeks of the pairing failing to secure any real success on the company’s red brand and losing their WWE Women’s Tag Team Championships at the 2021 Royal Rumble thanks to the now absent Lacey Evans who has been written off of television thanks to her real life pregnancy.

Following the statement by Flair, Peyton Royce’s mother, Kerrie, took to social media in order to lambast the company and the star for not giving others a chance:

“Of course you do. How about giving others a try” 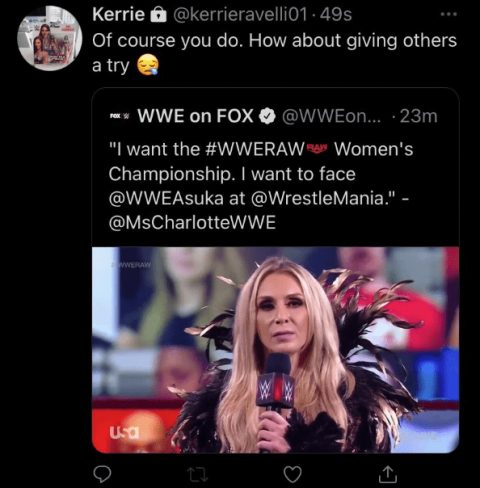 Peyton Royce has been loosely linked to Charlotte Flair by association, thanks to her pairing with Lacey Evans over the past few months. While the duo never reached any major plateau as a team, though they managed to secure a place on the Raw Women’s Survivor Series squad, Evans appeared to ditch her partner to buddy up with Ric Flair.

Since January 2021, ‘The Southern Belle’ had been at war with Charlotte after accosting ‘The Nature Boy’ and even announced that the pair were pregnant prior to the Elimination Chamber. However, Evans’ news turned out to be legitimate and she will now be away from WWE television for the remainder of the year.

The last time we saw Peyton Royce compete between the red ropes of Monday Night Raw was on January 18 when she fell to Charlotte in singles competition.