NXT UK Results will be updated live as they occur so check back throughout the show!

Keep up to date with all of tonight’s NXT UK results from the BT Sports Studios in London, England. Tonight we will crown the inaugural NXT UK Heritage Cup Champion as the tournament finally comes to an end.

NXT UK begins with a video package for the NXT UK Heritage Cup Tournament. We recap A-Kid and Trent Seven’s journey to the final with comments from both men. Trent Seven says he needs it now, while A-Kid says he’ll do it for a whole new generation.

Analysis: A really good match that did Devlin justice as champion. Jordan was never going to win this but he gave it a go and the champion sold his challenger’s threat. Now we need Devlin vs. Escobar as it was clear by the Grizzled Young Veterans returning to NXT that talent can travel.

Saxon Huxley challenges Rampage Brown in a backstage segment in the WWE UK Performance Centre. This isn’t going to end well for Huxley.

A vignette announces a Noam Dar chat show. It really looks and sounds like they have nothing for him so they’re giving him his own show.

Eddie Dennis and The Hunt are attacked by Mark Andrews and Flash Morgan Webster outside the BT Studios after it was revealed The Hunt were behind the attack of the Welshmen.

Analysis: A by the numbers match which pushed Jinny further in her quest for the NXT UK Women’s Championship and feud with Piper Niven. It’s a shame what they’re doing to Dawn, she’s better than enhancement talent.

Alexander Wolfe interrupts Sid Scala and demands a match with Joe Coffey with Gallus banned from ringside. Scala agrees and says Imperium will also be banned. That will happen next week. 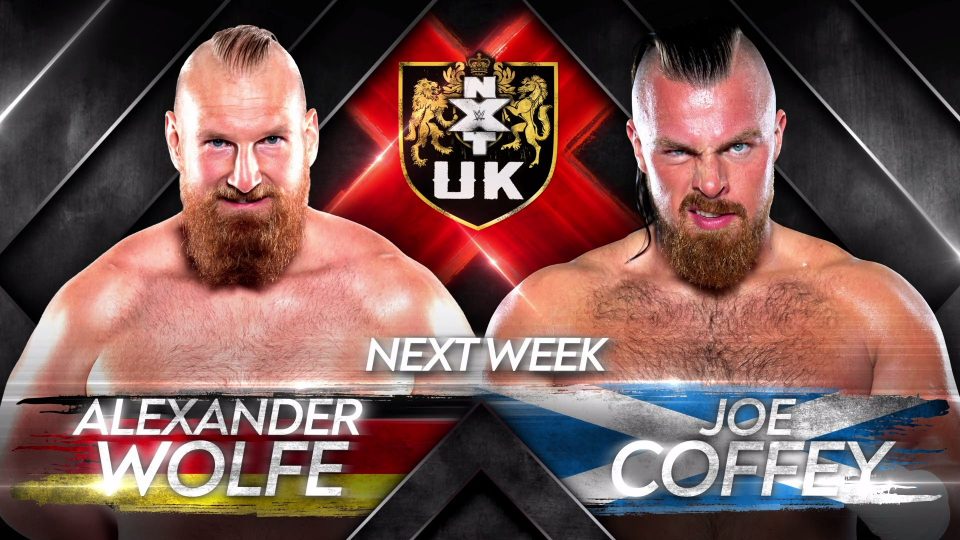 It’s announced that Mark Andrews and Flash Morgan Webster will battle The Hunt next week.

Analysis: This result surprised me a lot. I thought Seven would prevail seeing as he’s gotten very little from his NXT UK career so far, at the very least a heel turn would have been nice. However, the match was very good. It took a while to get going but the final few rounds were excellent and tense and the final few seconds were just pure drama. Marvelous job by both men, and this would have been MOTY contender with a crowd present. NXT UK must capitalise on this now and push A-Kid to the summit. A-Kid vs. Walter for the NXT UK Championship is surely on the cards. Maybe it will be David who slays Goliath after all.

A moment for eternity! 🏆@AKidWrestler#NXTUKpic.twitter.com/uBgDQkm0U9

Final analysis: this week’s edition of NXT UK was a very good offering which advanced the feuds of Alexander Wolfe and Joe Coffey, South Wales Subculture and The Hunt and elevated A-Kid to the next level with the win in the NXT UK Heritage Cup. However, it’s now hard to see where the brand go with Trent Seven. Winning the cup would have given him an avenue, but unless a heel turn is incoming or promotion to NXT then I fear he’ll be treading water on the brand for the foreseeable future. A potential Moustache Mountain reunion would be welcome for Seven right now, but with no sign of Tyler Bate then it’s looking very unlikely.