WWE has officially announced their largest ever class of Performance Center recruits – including the son of Rick Steiner, the man that’s recently taken the internet by storm due to “Brock Lesnar” comparisons, a TNA/IMPACT legend and several prominent talents from the independent scene.

Parker ‘The God Destroyer’ Boudreaux – The former College football star for the UCF Knights, stands 6’4″, weighs 295 pounds, and is only 22 years old. So much has already been said about the potential Parker will bring to the WWE, current stars already talking about him such as Matt Riddle and Braun Strowman is an early indication of the threat he poses to them, already.

Angela ‘Queen’ Arnold – A former Booker T student known as “AQA” who has worked in the Independent scene including SHIMMER and RISE. Angela has wrestled names such as Tessa Blanchard, Su Yung, Shotzi Blackheart and Penelope Ford.

Cora Jade– Formerly known as Elayna Black, the Chicago-born wrestler has already made an appearance on AEW Dark (losing in a tag match against Brandi Rhodes & Red Velvet) and more recently NXT, losing to Xia Li.

Christian ‘Killanova’ Casanova – An extremely charismatic star in the making who is also really confident on the mic. The 2-time Chaotic Wrestling Heavyweight Champion brings with him bags of personality plus a ‘killa’ finisher in the ‘Fedora Frog Splash’. 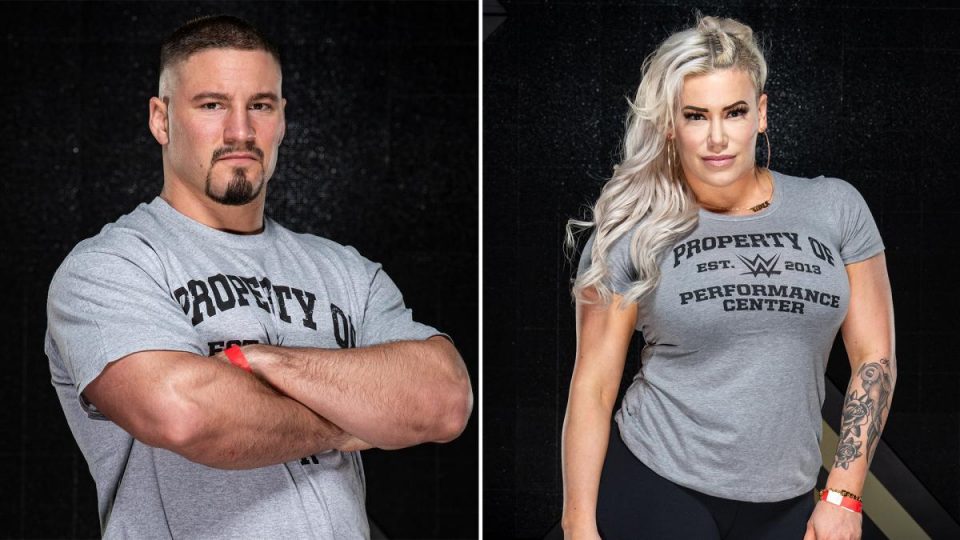 Gigi Dolin – More so known as Priscilla Kelly, ‘Hell’s Favourite Harlot’ has been compared with former WWE star Paige for her in-ring charisma. She recently appeared alongside Cora Jade (above) to compete in the Women’s Dusty Rhodes Tag Team Classic but fell short to Candice LeRae and Indi Hartwell.

Zoey Stark – The former ‘Lacy Ryan’ of IMPACT Wrestling was announced as signed by the WWE in January alongside Cora Jade and Gigi Dolin. Wrestling since 2013, the Utah star actually won her first appearance for WWE on an episode of NXT just last week, defeating Valentina Feroz.

Duke Hudson – A Former EVOLVE Tag Team Champion NWA Southern States Champion and No.153 of the top 500 singles wrestlers of 2019 according to PWI. The former ‘Anthony Henry’ has been wrestling since 2002, the 36 year old is now primed and ready to showcase his experience in the WWE.

Bronson Rechsteiner – The son of former WWF and WCW star Rick Steiner, and nephew of Scott Steiner. The former College running back has incredible potential to tap in to, and as a nod to his uncle Scott – his finisher is called the ‘Steiner Recliner’, a modified camel clutch.

Karissa Rivera – She has actually appeared for the WWE already, featuring in a vignette as Bobby Lashley’s ex-wife! Rivera actually made her NXT debut way back in 2018, losing at that time to Lacey Evans. She has also appeared on SmackDown in 2019 as one half of ‘The Brooklyn Belles’ alongside Kris Statlander in a quick loss to the then Women’s Tag Champions, The IIconics.

This latest class at the Performance Center has huge potential, from Independent veterans to former College stars who appear to ‘fit the mould’ of what success could look like in the WWE.

Of the ten, it’s Parker Bordeaux who has raised the most interest with his heavy online presence of late – but the others have incredible backgrounds which, if nurtured correctly, could blossom in to something quite special for the WWE.