After returning to WWE with a shocking new look, it looks like The Fiend will have a new addition to his attire at WrestleMania – if new renders used in WWE Supercard are anything to go by.

Following an incredible end to TLC which saw Bray Wyatt’s original Fiend character set on fire by Randy Orton, a Fastlane matched between The Viper and Alexa Bliss saw a new Fiend return, with a whole new look signifying the trauma he experienced at the hands of Orton last year.

Well, despite those changes, it looks like The Fiend will have a new addition to suit his new character, covering his burnt scalp with a long black rag – as depicted on the below image from WWE Supercard. 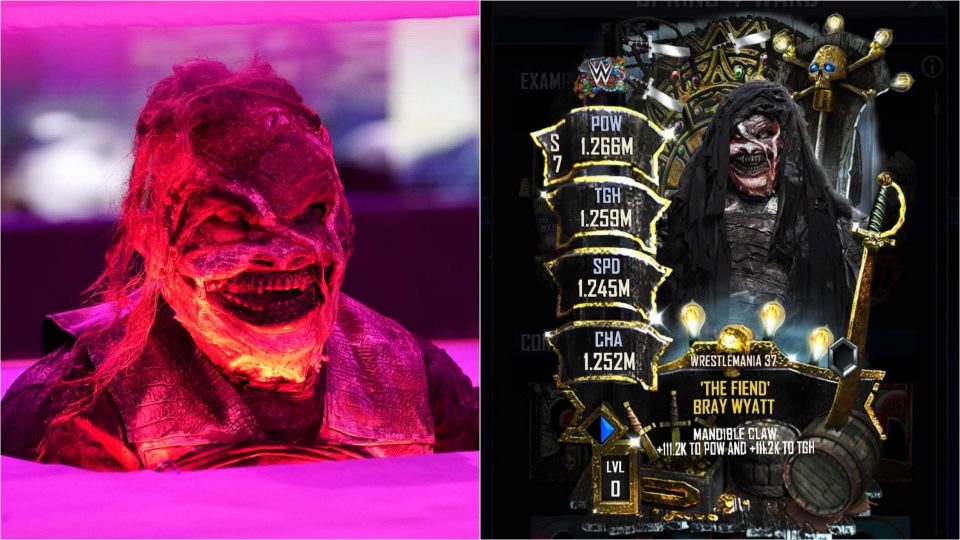 In a storyline that has thus far seen Randy Orton set fire to The Fiend in a Firefly Inferno Match, Alexa Bliss shoot The Viper with a fireball causing him to cover his face with a mask the following week, and the 14-time WWE Champion vomit black blood, it seems like anything can happen – the unprecedented announcement of a singles match between Randy Orton and Alexa Bliss at Fastlane was always bound to throw up a shock or two.

Well, it started with just that as Orton did throw up – coughing up the black blood and asking for a towel. The match would still go ahead though, with Bliss pelting fireballs at The Viper, and almost crushing him below a section of the ThunderDome, but Orton wouldn’t get to repeat history by hitting Bliss with an RKO, as The Fiend returned – showing off the scars of the attack he previously suffered from Randy Orton.

The Fiend and Randy Orton are now set to clash at WrestleMania as The Fiend competes in his first match since being set alight during that Fireflyt Inferno Match at TLC.

The mask, of course, depicts that the previous character’s demonic features have melted after being set on fire, with the mask now becoming a full wrap-around with synthetic burnt skin and ears covering Bray Wyatt’s entire head, and his trademark blonde dreadlocks being covered to show his storyline now-burnt locks.

You can see a close up of the mask below.

WWE has released a replica of the new Fiend mask, available to purchase via WWE Shop.

The mask is limited to 500 pieces.

Bray Wyatt and Randy Orton clash at this weekend’s WrestleMania as their long-term rivalry seemingly culminates on the Grandest Stage Of Them All. For details on how, when and where to watch, click here.