Cora Jade was interrupted on NXT 2.0 by none other than Smackdown star Natalya, who wasn’t as friendly toward the upstart as she first seemed!

After being unsuccessful in her quest to capture the NXT Women’s Championship at Stand & Deliver, Cora Jade addressed the NXT crowd for the first time on the April 12th episode of NXT 2.0. She made it clear that she needed to become NXT Women’s Champion in order to follow in the footsteps of her favorites, name dropping the likes of former champions AJ Lee, Sasha Banks, Natalya, Bayley, and Paige.

Her address was interrupted by a surprise appearance from none other than one of the women she mentioned as Natalya made her way to the ring. The SmackDown star was last seen in action at WrestleMania 38 in an unsuccessful attempt to capture the WWE Women’s Tag Team Championships alongside her partner Shayna Baszler in a fatal four way tag team match that also included Carmella & Queen Zelina, Rhea Ripley & Liv Morgan, and eventual winners Sasha Banks & Naomi.

The veteran introduced herself, saying that her name was Nattie but most people in WWE call her Natalya. Cora was beside herself at seeing the WWE veteran appear, and she explained that Natalya was her first favorite wrestler. She recounted a story of being ten years old and having the Queen of Harts point at her in the crowd during a WWE show in Indiana, and Natalya confirmed that she remembered that night.

A tearful Nattie said that the young upstart was the future of the NXT women’s division before showing her true colors and attacking Jade with the words, “The future is bleak.”

"You are the future of the #WWENXT Women's Division… But the future is bleak. 😮@NatbyNature@CoraJadeWWEpic.twitter.com/sFtmi5Zw58

After a commercial break, Natalya entered the NXT women’s locker room, and made sure that they knew they were being put on notice. Tatum Paxley, who has recently teamed with Diamond Mine’s Ivy Nile, spoke directly to her, and the Queen of Harts will face off against Tatum in one on one action on next week’s NXT 2.0. 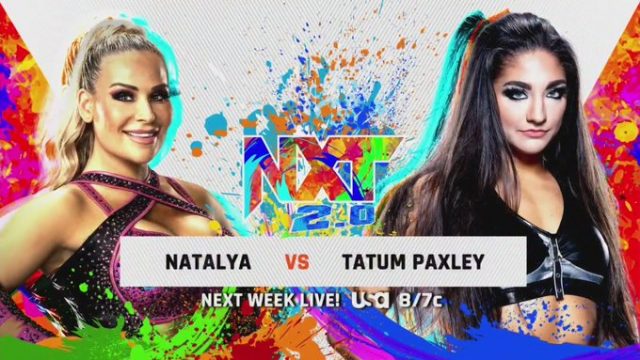 Elsewhere on NXT 2.0, both Cameron Grimes and Mandy Rose retained their championships, and the newly-debuted team of Pretty Deadly were crowned the NXT Tag Team Champions after winning a gauntlet match. Full results from the show can be found here.