In a tweet that’s now deleted, MJF responded harshly to comments Tony Khan made on an AEW media call ahead of Double or Nothing.

MJF hasn’t been shy about mentioning his contract situation on AEW television, making it well known that his contract expires in 2024 and that he’s not adverse to seeking other options, including joining the WWE if the offer is right.

Tony Khan has since praised MJF for bringing the situation up on social media and on AEW programming. Replying to a question from Inside The Ropes’ Kenny McIntosh on AEW’s pre-Double or Nothing media call, Khan stated that wrestling is at its best when real-life mixes with the televised product:

“I think wrestling thrives when real-life merges with the things on-screen. The real-life conflict is often just as exciting as any conflict on-screen which is one of the great things about what AEW has brought to the wrestling business. There was no real, major free agent market with the top stars crossing between promotions.

Frankly, the competition needed to be brought to the biggest stage and in the ’90s, we had TBS and TNT both in the wrestling game. Now, with the launch of AEW, we’ve been able to bring that back. We’re taking what’s happening in real-life and potential movement and these contract negotiations – it’s exciting stuff – and it’s added another element to what’s already a very exciting match at Double or Nothing with Wardlow vs MJF.

MJF has been very vocal, not only about his own contract, but about his former bodyguard and how he’s tried to hold down his career. For Wardlow, this is a huge opportunity to officially become part of AEW but also to shed that image that he’s just MJF’s heavy, MJF’s thug. For MJF, it’s been a great opportunity to not only air some real-life grievances but also his status, contractually or otherwise.

I think it’s just been great to see these two on television and people are really excited about the fight this Sunday at Double or Nothing.”

In a tweet that’s since been deleted, MJF himself responded to Tony Khan’s comments, making his dissatisfaction with his AEW contract even more apparent. A screenshot of the deleted tweet can be seen below. 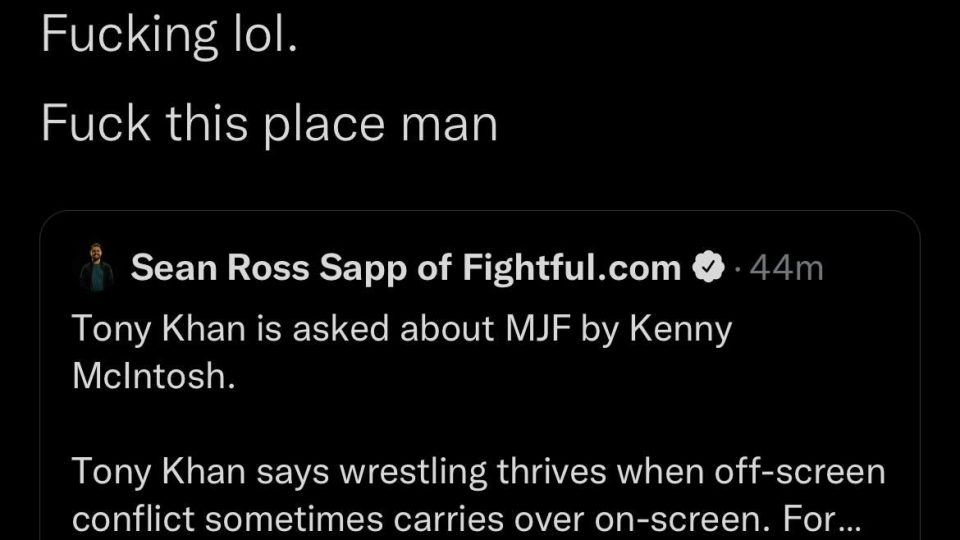 MJF is set to take on his former employee Wardlow at Double or Nothing on May 29th.

If you use any quotes from the transcription in this article, please give credit and also a h/t with a link back to Inside the Ropes.