MJF isn’t generally known for his role as a good Samaritan, but he recently turned over a new leaf.

On the January 13th episode of AEW Rampage, Anna JAS teamed with Tay Melo in the main event to take on Ruby Soho and Willow Nightingale. However, the bout was far from a regular tag team match. Instead, the four women went to war in a Street Fight.

The action was all out chaos from the opening bell while an incredible amount of blood was shed. To sum up the level of violence on show, Ruby Soho scored the win after hitting her Destination Unknown finishing move on Tay Melo onto a pile of thumbtacks.

The other high-profile spot in the match saw Willow Nightingale hit a Powerbomb on Anna JAS off the stage and through a table. However, it was Nightingale who made the most contact with the furniture and the former Anna Jay missed it altogether landing flat on her back on the floor.

The spot was heavily criticised online by a section of fans for being unsafe, while other’s were concerned for Anna’s safety. Although she did find a somewhat unlikely ally in the form of MJF. The AEW World Champion took to twitter to hit back at fans who had been critical of his co-star before deleting the post.

“What we do is real. Our lives can end in that ring in an instant. Anna Jay put her body on the line for your entertainment and you have the balls to criticise her. That’s why I don’t rush to please the internet fans. I rush to please my wallet.” 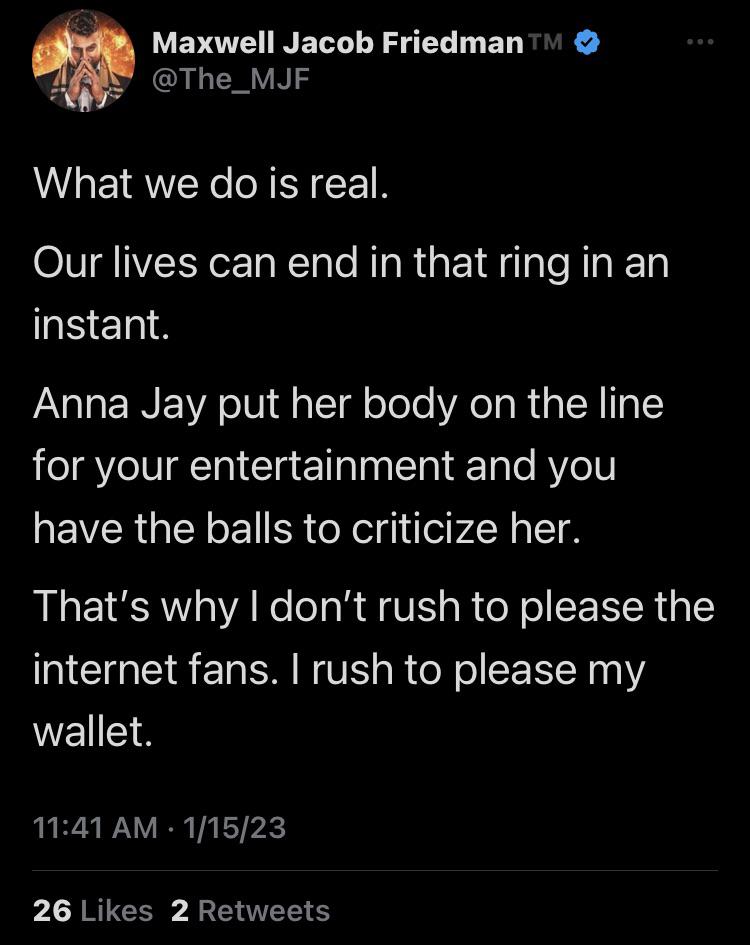 MJF has only wrestled once since defeating Jon Moxley to claim the AEW World Championship at Full Gear in November. That bout came when he defeated Ricky Starks on the special Winter Is Coming episode of Dynamite on December 14th.