Former WCW star Kevin Sullivan claims a colleague was fired by the company after somebody overheard a fan comment on how much they looked like Hulk Hogan.

Kevin Sullivan is a legend of the wrestling world but is perhaps best remembered today for being the Taskmaster that led the Dungeon Of Doom in its quest to end Hulkamania when Hulk Hogan joined World Championship Wrestling in 1994.

Sullivan presided over an eclectic group of stars in his Dungeon that included The Giant, Meng, Lex Luger, the Zodiac, The Shark, and the behemoth, Loch Ness. The group’s crowning achievement was the notorious Tower Of Doom Steel Cage Match when they were joined by Ric Flair and Arn Anderson in the Alliance To End Hulkamania. In the end, Hogan and Randy Savage were able to defeat their numerous foes in the unique match.

Speaking to the Two Man Power Trip of Wrestling’s John Poz, Sullivan revealed that a member of Hogan’s inner circle signalled the death knell in WCW for his supposed brother Dave:

“We were at TV and some fan said, ‘Oh, he looks exactly like Hulk Hogan.’ That person, that was it… he went and told Hulk, ‘You gotta get rid of him.’ And that’s how a very nice human being that busted his ass got fired by a guy that was sucking Hogan’s ass and didn’t give a f*ck about another human being.” 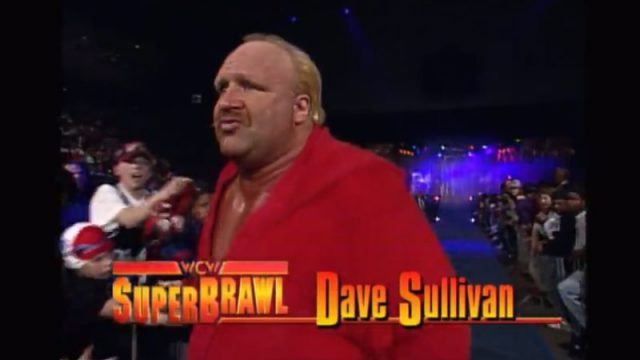 Dave Sullivan’s three-year run in World Championship Wrestling came to an end following a defeat to Chris Benoit on the 13th of April 1996 edition of WCW Saturday Night – just three months before Hulk Hogan changed his look and the wrestling world when he helped form the nWo.