Kevin Owens has had a heart-warming reunion with former WWE Superstar Braun Strowman at the recent MegaCon even in Orlando, Florida.

Braun Strowman – now known by his real name Adam Scherr – was released from his WWE contract on June 2nd, 2021 as part of one of many rounds of budget cuts to take place at the company in the last year.

Since then, Scherr has made a number of one-off appearances in multiple promotions including Ring of Honor. In recent months, the former World Champion has joined forces with his friend EC3 to launch their own promotion called Control Your Narrative.

Now, a photo – which can be seen below – has surfaced on Reddit showing Scherr reuniting with his old colleague Kevin Owens at the recent MegaCon event in Orlando, Florida. While we can’t see Scherr’s reaction to Owens jumping on him for a hug, it’s clear from the former Universal Champion’s expression that he’s delighted to see the former Monster Among Men. 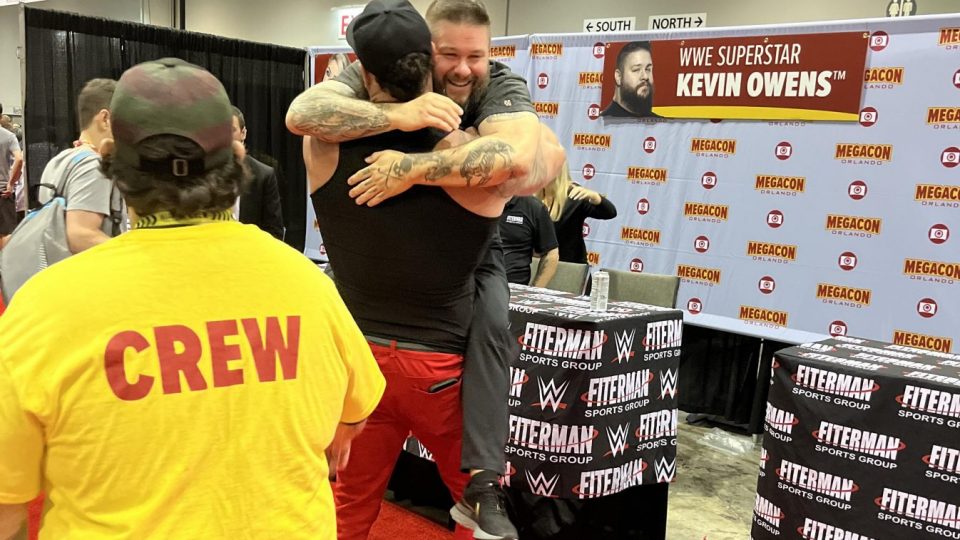 While in WWE, Strowman engaged in a brutal feud with Owens in 2018 which included a Steel Cage Match at that year’s Extreme Rules. Owens technically won the match when Strowman through him off the top of the cage into an announce table.

The feud culminated at SummerSlam when the New Face Of Destruction put his Money in the Bank contract on the line against Owens. This time Strowman came out on top, dominating Owens and getting the pinfall victory in short order.

Braun Strowman’s last match in WWE came at WrestleMania Backlash on May 16th, 2021. At the event, he competed in a Triple Threat Match for Bobby Lashley’s WWE Championship. Lashley hit Strowman with a Spear to retain the title.