Keith Lee has responded to suggestions surrounding his newly acquired Bearcat nickname in WWE and says despite rumours contrary, it wasn’t his idea.

Lee had been previously been known as ‘Limitless’ Keith Lee during his hugely successful stint on NXT. After a stellar career on the independent scene, Keith Lee joined the NXT roster in 2018. There he captured the NXT North American Title and became the only man in NXT history to capture the NXT Championship and the NA Title at the same time.

The NXT Title win would prove to be a high point of Lee’s WWE career despite being hugely popular with fans as proved by his involvement on Team NXT at the 2019 Survivor Series and his appearance in the men’s 2020 Royal Rumble match.

Lee dropped the NXT Championship to Karrion Kross just weeks after winning the gold and then soon found himself moved on to Raw where ‘Limitless’ and his NXT music were removed from Lee’s presentation.

Keith Lee has discussed his struggles at the beginning of 2021 after a COVID diagnosis led to issues with inflammation of the heart that kept him out of the ring for five months. He recently returned to Raw with another tweak to his presentation and a new nickname as he was now to be known as Keith ‘Bearcat’ Lee.

Bearcat was not long for the WWE Universe however as it was reported on the 4th of November that Lee was one of 18 stars released from their WWE contracts alongside the likes of Nia Jax and Lee’s fiancée Mia Yim.

Following his release, Lee responded to a fan on social media who intimated that it was Lee’s idea to be known as Bearcat with Lee correcting them by saying: 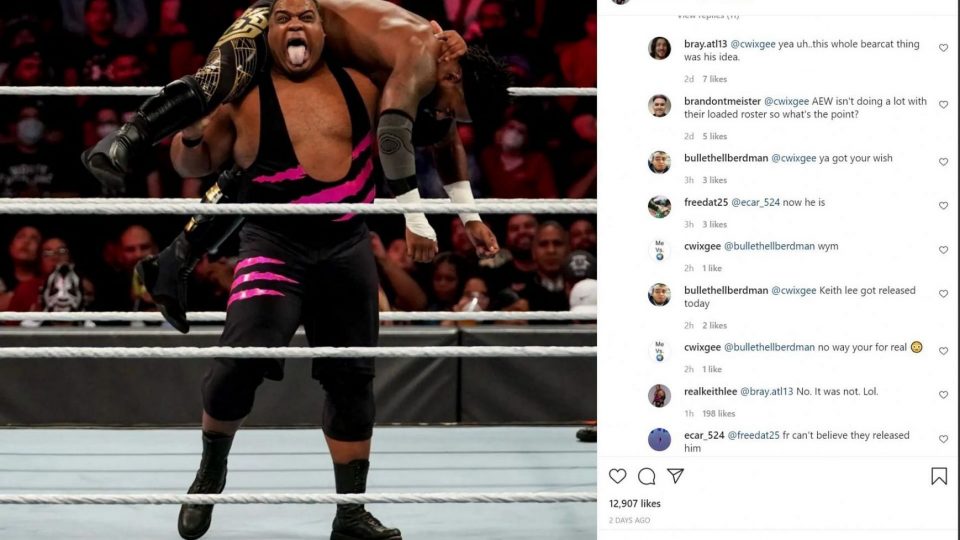 It is believed that Keith Lee will be subject to the standard 90-day non-compete clause that is enforced when stars are released from their WWE contract.

One NXT star may not be subject to such a clause as it has been reported that their contract with WWE ends next month.