Johnny Gargano has recalled organising a special gift for Shawn Michaels when he left NXT, leaving both men both in tears.

At NXT TakeOver: In Your House in June 2021, Johnny Gargano paid tribute to WWE Hall of Famer and NXT producer Shawn Michaels, with ring gear inspired by the Heartbreak Kind. (You can see the gear below)

Fast forward to December 2021 and Gargano said goodbye to NXT after letting his WWE contract expire. The star had become a mainstay of the brand, and one of the most beloved figures from the ‘Black and Gold era,’ so naturally his departure was an emotional affair.

Speaking during an appearance on The Sessions with Renee Paquette, Gargano revealed that he was something of a wreck before he even made it to the ring. The former NXT Champion explained that he had given Shawn Michaels a gift backstage linked to his tribute at TakeOver.

Gargano recalled the exchange which left both men in tears, and his wife Candice LeRae threatening that if he now didn’t cry when their son was born he would be in trouble.

“I did like tribute gear to him at the In Your House: TakeOver,” said Gargano. “And I had a headband and no one in the world has a piece of the TakeOver gear I’ve worn so me and Candice the night before did a little shadow box and we did the shadow box with the headband in it and we put a picture of me and him dressed in gear and then me and him when I was a kid and I met him.

“Side by side pictures. Then I wrote a nice message on the back as well about how much he meant to me and how much he’s meant to my career. I was to give that to him right before I went through the curtain. Obviously, he started crying, I started crying, and then it’s funny because Candice has never seen me cry so that was kind of like the first time she had ever seen me cry. She was very adamant that if I didn’t cry when the baby was born, I was going to be in big trouble.” 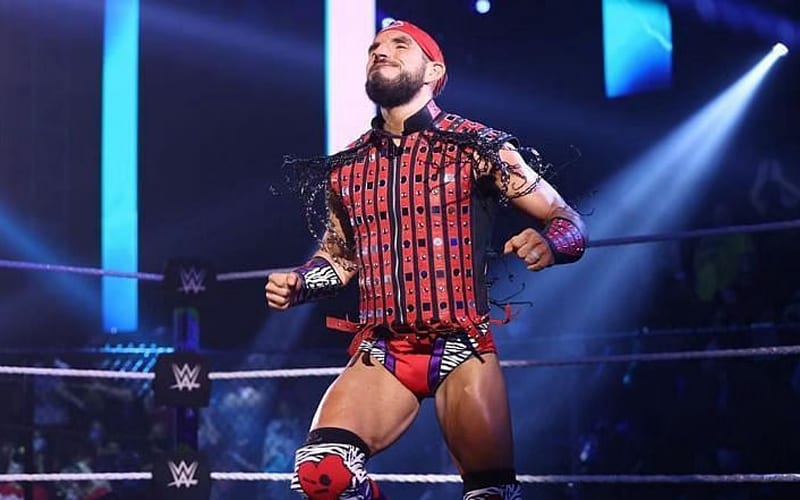 Johnny Gargano initially signed with WWE in 2015, and before long he was a firm fan favourite in NXT. Over the next six years, Johnny Wrestling became the brand’s first-ever triple crown champion, winning the NXT, North American and Tag Team Championships.

However, as the end of 2021 approached, Gargano let his WWE contract expire. He later revealed that the decision had been taken a number of months earlier, as he wanted to be at home for the birth of his child.

Despite speculation linking the star was AEW, Gargano is yet to return to the ring. Meanwhile, Candice LeRae remains under contract with WWE, but her deal is expected to expire soon.

H/t to Wrestling Inc for the transcription.