Wrestling legend Gerald Brisco has given his biggest hint yet about where his future lies with the promise of an announcement this coming Wednesday.

The wrestling world was shocked on September 10 when the news came out that Brisco was released from his WWE contract after 36 years with the company.

Brisco had been involved in every aspect of the promotion, from wrestling to serving as Vince McMahon’s right-hand man to scouting amateur wrestling talent to working as an agent at live events. He was considered a father figure to those who knew him best.

Brisco started working with WWE in 1984 when he, brother Jack and Jim Barnett sold their stakes in NWA affiliate Georgia Championship Wrestling to Vince McMahon, giving the WWF control of the promotion and access to its coveted Saturday night time slot on WTBS.

That led to an infamous moment in wrestling history known as Black Saturday on July 14 1984, the day the WWF took over the World Championship Wrestling show that had aired from TBS studios in Atlanta since the mid-70s.

The response to the cartoonish WWF replacing GCW on the station was disastrous, with thousands of complaints flooding into TBS.

Fans in the territory did not want to see weeks-old recycled programming from syndicated shows that had already aired elsewhere, nor did they want the WWF’s over-the-top style of wrestling in place of the traditional studio show they were used to.

The WWF show was a flop in the ratings and by 1985 Vince McMahon had sold the slot to Jim Crockett for $1 million, who reintroduced NWA programming to TBS before selling his promotion to TBS owner Ted Turner in 1988.

That led to Turner calling Vince McMahon and famously telling him he was “in the wrasslin’ business”, which eventually led to Turner renaming his group WCW and fighting McMahon tooth and nail in the Monday Night Wars.

Throughout that entire period and beyond, Gerald Brisco was a loyal soldier to McMahon, staunchly defending and supporting WWE in any situation.

Brisco was so trusted by McMahon that he was one of the very few people within WWE aware of the plans for the Montreal Screwjob at Survivor Series ’97.

Brisco was responsible for informing referee Earl Hebner what was happening just moments before the match and also showed Shawn Michaels some legitimate holds in the hotel the night before in case he needed to defend himself after the double-cross went down. 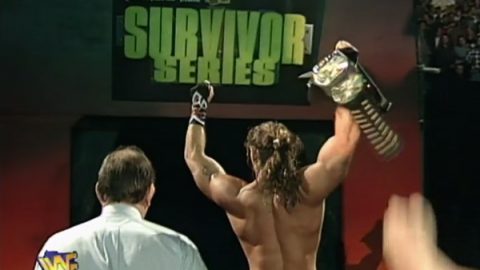 It was something of a surprise, then, when a man as respected and valued as Gerald Brisco was included in the list of names either furloughed or fired by WWE earlier this year at the onset of the COVID-19 pandemic.

It was even more of a surprise when Brisco was officially released several months later amidst another WWE cull of staff it deemed non-essential.

Brisco himself was surprised by the news, noting that he was not angry, but full of emotions in the immediate aftermath of his release.

Since then, the 74-year-old has continually teased that a big announcement is imminent. Last week he tweeted out the announcement on Twitter but trolled viewers with “technical difficulties” by having his phone run out of battery just before the big reveal.

Now, he has given the biggest hint yet that his announcement is related to him working with AEW, tweeting that he “Khan’t wait” to tell fans the big news – an obvious reference to AEW owner Tony Khan.

Oh gosh! We had some technical difficulties! I truly Khan't wait to tell you my big news! Stay tuned WEDNESDAY NIGHT for my BIG ANNOUNCEMENT! What do you think it's gonna be? 🤭🤷‍♂️#BriscosBigAnnouncementhttps://t.co/UZcmJeG5Wu

Brisco would be a tremendous asset to AEW, regardless of his age. With his knowledge and experience in the industry and his eye for scouting world-class talent, he still has plenty to offer to the fledgeling promotion.

Of course, he may well just be having some fun and trolling fans again, but he has definitely done a great job in building up intrigue about what his next move is going to be.

Stay tuned to ITRWrestling.com for more on #BriscosBigAnnouncement in the coming days.

The Gents are back to talk about SmackDown happenings with Seth & Edge, CM Punk,… Listen

KJ & Oly Return to your earholes, as Oly is FINALLY back from his extended… Listen