It has been announced by Fightful and POST Wrestling that the legendary wrestling promotion, Georgia Championship Wrestling, is set for a huge revival beginning with a show on October 3rd.

The structure would be similar to how different promotions worked under the NWA banner prior to and even following the death of the territorial system in the late eighties and early nineties.

To go along with the revival and territorial design, plans are also in the works for a brand new Georgia Championship to be created – which will be defended across all promotions in the state – and either an internet or local television deal which owner Gary Odum will negotiate.

For now though, highlights of their October 3rd revival show will air on both Facebook and YouTube.

Originally founded by promoter Paul Jones (fka Andrew Lutzi) in 1944 as ABC Booking, Georgia Championship Wrestling came around in 1971 under the watchful eye of Ray Gunkel and was once considered the holy grail of wrestling promotions. 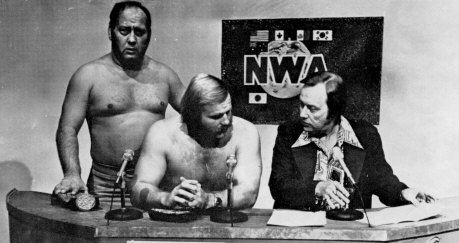 Featuring future legends such as El Mongol, Buddy Fuller, The Masked Superstar, Mr. Wrestling II, Tommy Rich, Junkyard Dog, Roddy Piper, The Minnesota Wrecking Crew and announcer Gordon Solie, the territory was also visited by names such as Ric Flair and The Road Warriors over the years thanks to the company’s relationship with the NWA.

With the re-branding, GCW moved home to the newly built Omni Coliseum and secured television coverage from a young Ted Turner who wanted the promotion to air on his WTCG Station. Unfortunately, however, things were not good behind the scenes.

Sadly, Ray Gunkel passed away after suffering a heart attack following a bout with Ox Baker and his share was sold from under his wife, Ann, to Bill Watts who began to spawn Mid-South Sports from his acquisition.

In response, Ann Gunkel created All South Wrestling Alliance to run separate from the NWA and against Bill Watts, taking several loyal GCW stars with her. This only lasted until Jim Barnett appeared and took control, putting Gunkel out of business and returning thriving gates to the Omni.

In 1983, the promotion was owned by a consortium of Jack and Jerry Brisco, Jim Barnett and Paul Jones with Ole Anderson possessing a ten percent share. On July 14th, 1984, however, Georgia Championship Wrestling ceased to exist when Vince McMahon bought the company and its time slots for his WWF television – leading to the infamous Black Saturday.

The acquisition included Jack and Jerry Brisco who sold their share to McMahon for a cash incentive and guaranteed jobs with the World Wrestling Federation.

Though Ole Anderson tried to continue with the company after the sale, renaming it Championship Wrestling from Georgia, and joined forces with Jim Crockett Promotions in order to promote, the endeavour was ultimately doomed to fail.