When Chris Jericho visited Inside the Ropes for his SOLD OUT tour the laughs were aplenty as he recounted his illustrious career in rib-aching detail.

One of the stories that people yearned to hear was that of the genesis of Ralphus, a portly misfit that Chris Jericho used as a security guard during his time in World Championship Wrestling to mock the entrance of Bill Goldberg during the onset of their rivalry.

Acquiescing to public demand, ‘Le Champion’ took to the microphone to tell the full story of Ralphus and how he went from truck driver to cult icon.

“Someone asked me earlier about this guy I used to have with me that would come to the ring, his name was Ralphus. So back in WCW one day I showed up and there was a pay-per-view called Fall Brawl and I had no match on it. Terry Taylor was like, “oh you got a match alright.” “Who’s my match against?” “You’re going to wrestle a midget Goldberg.” And I was like, “what?” And he goes, “you’re going to wrestle a midget Goldberg because it’s funny.””

Chris went on to explain that this was during the time period when Goldberg was experiencing his undefeated streak and the match against the impersonator lead to him continuously challenging the wrecking machine. 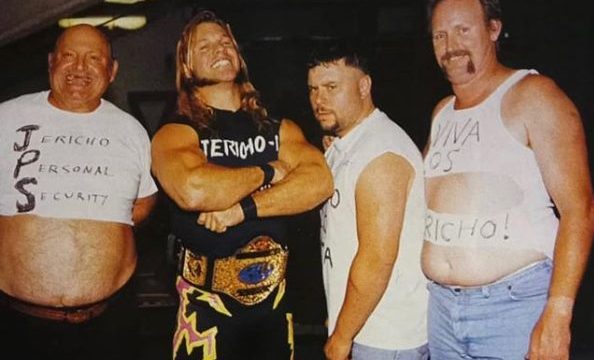 Following an amusing confrontation between the two men at an airport following Fall Brawl which can be heard in the video below, Jericho delved into the creation of Ralphus when he hit upon the idea of mimicking Goldberg’s entrance.

“So then the idea would be that I was challenging Goldberg and Goldberg at the time, or still does , comes to the ring with a bastion of security with him and I thought I should probably do something like that so there was all these guys from the power plant, all these jacked up students of wrestling and I thought I could use some of those guys…I wanna use that guy.”

Of course, the former AEW World Heavyweight Champion was talking about the man who would become his popular head of security who he saw stood against a wall.

“There was this guy who was a truck driver and who was always around and who was [high pitched cartoon voice] “how you doing? Nice to see you!” And he was a fat guy and he was bald and he had these f***ing weird teeth. There was like 2 teeth that stuck out of the side of his mouth that looked like candy corn. It looked like a pylon upside down, just sticking out the side of his…and I’m like, “who is this guy?” And that’s the guy. He was the weirdest looking guy and I want to use this guy. His name was John Riker and I was like, “hey man you want to do something with me on TV?” And he was like [high pitched cartoon voice] “sure what do you want to do?” And I was like, “just kind of walk to the ring with me like a serious security guard”. He was like [high pitched cartoon voice], “sure”, and I said, “would you mind wearing this white T-shirt if I cut the bottom of it off” because he was really kind of fat and his gut would hang out.”

Chris Jericho then told of the birth of the popular slogan, ‘Jericho Personal Security’, the name which adorned the front of the attire of his faux group:

“So I took this marker and I wrote Jericho Personal Security, JPS, which if we would have sold those things we probably would have sold like a dozen and there was another guy backstage who looked like Kenny Powers. And so he was the Jerichoholic Ninja. I wrote a t-shirt for him and they walked me to the ring. And this f***ing guy was so funny, Ralphus, and I got the name from there’s a really cheap horror movie from the 60s called blood sucking freaks and there’s another little person who’s this drunken murderous midget and his name is Ralphus. And I was really into the movie at the time so I was like, I will call him Ralphus.”

The story then dips into how disorderly things were in WCW and that no talent ever had to ask permission to do anything. After an amusing story about him and Chavo Guerrero, Jericho drew the tale back to how no one really knew he would take Ralphus to the ring:

“No one knew I would start walking to the ring with Ralphus and he started getting over. And what I would do I said, “you gotta be serious. If people try and touch me you say ‘don’t touch him! Don’t! Stop!’ But the guy didn’t have an angry bone in his body so whenever he would do it he was laughing. And he started getting over as this cult character and I had a lot of heat at the time and he would just start showing up at house shows.”

The story of Ralphus beginning to show up on house shows and live events, never understanding professional wrestling or how to be a heel are tales that will have you rolling in the aisles and can be heard in in full during the video.

Chris then turned his attention to how WCW wanted to use Ralphus in matches even though he wasn’t a wrestler, just because he was getting over with the crowds:

“So I had a match against Hugh Morris and Hugh Morris goes to the second rope for a moonsault and Ralphus is supposed to hold his leg. Ralphus isn’t even around. Hugh Morris is waiting, f***ing does the moonsault. Afterwards I look outside and I see Ralphus talking to some girls. Some Ralphus groupies in the front row. And afterwards, backstage, he’s got a bouquet of flowers. I said, “what the f*** happened to you man? You were supposed to grab his leg on the moonsault.” He said, ” I know but the girls in the front row they like me. They gave me flowers.”

After describing how he hit Ralphus with the bunch of flowers, Jericho ends the interview with several wonderful tales about the time Arn Anderson told him to look after Ralphus because he was making love to a groupie in the truck, how Ralphus covered himself in baby oil before a Jericho match with Dean Malenko, a heart warming ditty of how he got Ralphus paid for his appearances and finally wanting him by his side when he made the move to the WWF.

All of which can be heard in their entirety during the full video above.

Stay tuned to Inside the Ropes for more exclusive interviews and stories from the biggest names in professional wrestling.