Cody Rhodes has shared the latest update on his condition after suffering a torn pectoral tendon and still going on to headline Hell In A Cell.

Rhodes’ feud with Seth Rollins began at WrestleMania 38 when The American Nightmare made his shocking return to WWE following his AEW departure. Since then Rhodes and The Visionary have continued their rivalry with Rhodes picking up two wins in as many months over Rollins before Hell In A Cell.

With Roman Reigns off the show, Cody Rhodes and Seth Rollins were the main event of the Hell In A Cell premium live event, competing in the devilish and dangerous structure. But all of that was nearly for nought as WWE announced that Rhodes had suffered a serious torn pectoral injury in the lead-up to the show.

Rhodes announced that he still intended to compete, a decision he has said since was solely down to him. There were audible gasps from the crowd in Chicago when Rhodes unrobed revealing the spectacular bruising that covered half of his chest and much of his upper arm.

Despite the injury, Cody Rhodes bravely soldiered on, picking up another win over Rollins. On Raw, however, the former WWE Champion exacted revenge on Rhodes, planting him with a sledgehammer shot and seemingly taking out the former AEW star for the foreseeable future.

Now Cody Rhodes has shared an update on his injury on his social media, one he says might be the last for a while, that shows the current extent of the severe bruising on his body. 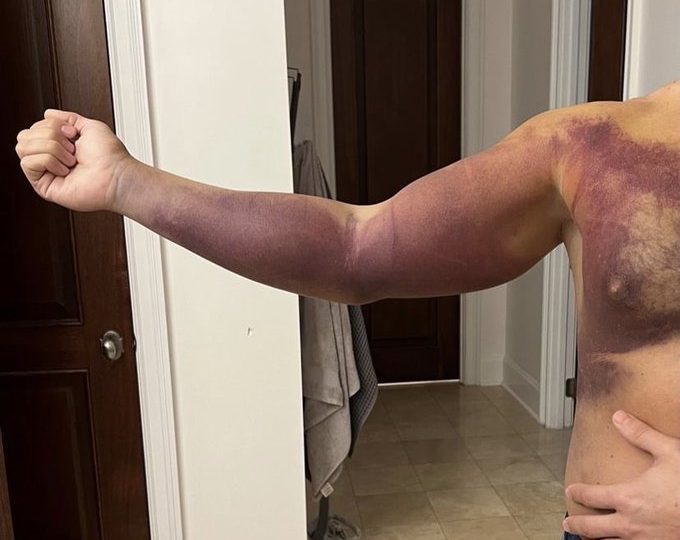 There is no word on how long Cody Rhodes will be out of action but reports have said he is set to undergo surgery on Thursday 9th of June and could be targetting the Royal Rumble in January 2023 for a monumental return.