At WrestleMania 38 Cody Rhodes made his triumphant return to WWE where he defeated Seth Rollins and was greeted by fans as a conquering hero. However, it could be argued that this spectacular moment wouldn’t have been possible had it not been for his run with AEW.

This was a journey that began back in 2018 with the All In event on September 1st. The pay-per-view was promoted by Rhodes with the Young Bucks in partnership with Ring of Honor. The independent event featured stars from NJPW, IMPACT Wrestling, AAA, CMLL, MLW and the NWA.

The success of the event led to the creation of All Elite Wrestling in January 2019 where Rhodes and the Young Bucks teamed with Tony Khan and Kenny Omega. Cody Rhodes served as Executive Vice President for the entirety of his AEW tenure, something he clearly hasn’t forgotten.

Posting to his Instagram Stories, Rhodes revealed that he still uses a piece of AEW history as motivation. In the post the American Nightmare showed off an All In backstage pass which he has hanging in his truck.

“Hanging in my truck”

“Everyday on the way to PT, a nice little reminder to shoot for the furthest goals and to dream bigger every day.” 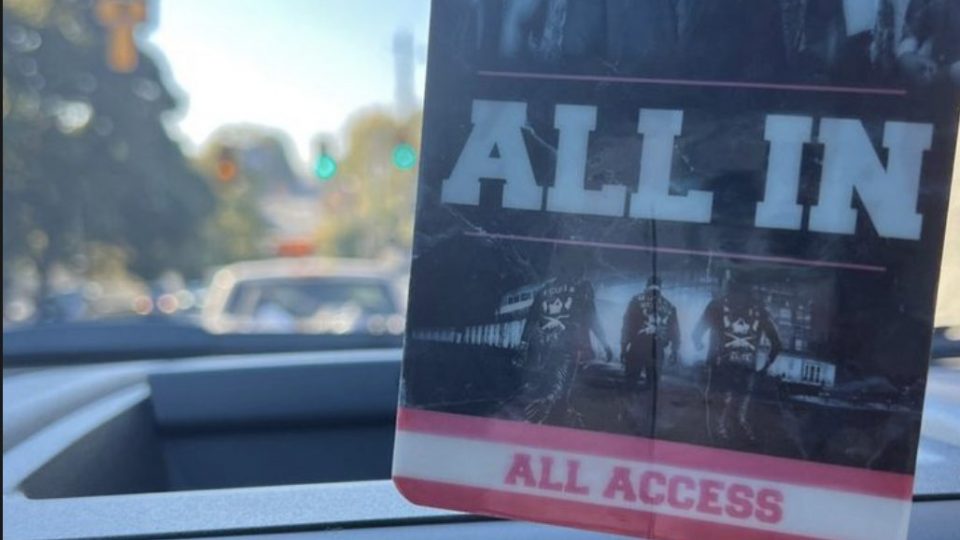 Since returning to WWE, Cody Rhodes has repeatedly expressed his desire to win the WWE Championship, a title his father – The American Dream Dusty Rhodes – failed to win.

In the ring Rhodes engaged in a lengthy feud with Seth Rollins which saw him win three-high profile matches against the star in a row. However, ahead of their meeting at Hell in a Cell, the American Nightmare suffered a severe pectoral injury. Despite this, he competed inside the structure against Rollins in the main event as planned.

Following the event Rhodes was written off television and underwent surgery to repair the damage. It was recently reported that the former Intercontinental Champion is “ahead of schedule” with regard to his recovery.