Bret ‘Hitman’ Hart has given the lowdown on his famous appearance in The Simpsons, twenty three years after the episode aired.

Lending his vocal talents to the cartoon version of himself, ‘The Excellence of Execution’ popped up in the episode, ‘The Old Man and Lisa’, in which Mr. Burns loses his vast millions and turns to Lisa Simpson for help.

Though Bret Hart’s cameo wasn’t huge, he appeared in full wrestling attire as one of the potential inhabitants of Mr. Burns’ mansion, his guest spot was publicised across the world and even received a WWF Magazine front cover where and Bart Simpson – dressed as Hart – stood back to back. 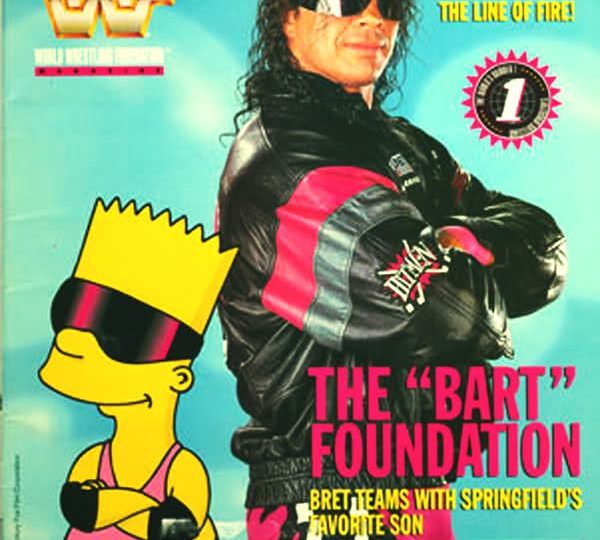 Now, ‘The Hitman’ has opened up to Sean Ross Sapp about his casting and revealed why his voice sounded completely different in the aforementioned episode. According to Hart, he was originally slated to play the Mad Viking:

“I think the funny story about the Simpsons cartoon is they initially were not going to draw me in it as me. But, I had just lost the title to Shawn Michaels at the Iron Man match in Anaheim. This is maybe a week or two later. They flew me in, I was just gonna be the Mad Viking or something like that. I was gonna be some other wrestling persona that was made up, a fictional one. I tried really hard to get them to draw me in as myself. They finally said, ‘It’s just the part for Mad Viking, take it or leave it,’ and I said, ‘Okay, I’ll still take it. It’ll be fun to go to L.A. and do the voice for the Mad Viking.’ But, anyway, I did the whole thing in about five minutes. I drove there in a big limo, went into the studio, and I did my lines in less than five minutes. Did it every which way you could think of. ‘More mad,’ ‘Okay, not quite so mad.’”

Once the production team realised just how big Bret Hart was in wrestling circles and the casting attracted worldwide attention, the decision was made to make ‘The Best There Is, The Best There Was, And The Best There Ever Will Be’ himself after all:

“My limo driver had driven off, had gone to get gas, so I got stuck sitting there for about a half-hour ‘cause I got done so quick. All these workers that were working at FOX Studios came out of the woodwork. I’m talking over a hundred people came out and they had programs and pictures and figures. So, I just signed. I had nowhere to go anyway. So, I just signed all their stuff. I remember when I was sitting there after I’d signed for maybe 30-40 minutes, I remember the guy who was the director of my episode came up to me and he goes, ‘I had no idea you were this big of a star. If it’s okay with you, we’re gonna draw you in as yourself now. ‘Cause we had no idea.’

So, I always thought just by being a good sport and being nice, taking my time and being friendly with people and signing autographs, they drew me in as myself. Never hurts to be a nice guy. I thought it was always an interesting story that it paid off. ‘Cause I think it was a much bigger deal being drawn in as Bret ‘the Hitman’ Hart and having caused Mr. Burns to go bankrupt and taking his house and all that.”

Bret then spoke about the fact that no one believed he had actually recorded the voice over himself, because his voice sounded rougher than his usual tone:

‘The Old Man and Lisa’ first made air on April 20, 1997, the same day that Bret Hart went one-on-one with Stone Cold Steve Austin at WWF In Your House 14: Revenge of Taker.

Credit for the interview and transcription: Fightful