Bobby Lashley recalls WrestleMania 37 being delayed because of the weather, and says he could barely contain his energy while he waited for the show to start!

WrestleMania 37 in Tampa, FL was set to be a monumental occasion as it was the first WWE show to have fans in the crowd after the COVID-19 pandemic took its hold on the world. After WrestleMania 36 was held in front of zero fans, performers and audience members alike were abuzz with excitement at returning to some sense of normality.

However, Mother Nature intervened at the beginning of the show, and a torrential rainstorm caused the first weather delay in WrestleMania history, putting on hold the opening match between Bobby Lashley and Drew McIntyre for the WWE Championship. Because of the delay, many performers had to cut off-the-cuff promos backstage to fill time while Michael Cole and Samoa Joe’s poncho-clad commentary became an iconic image. 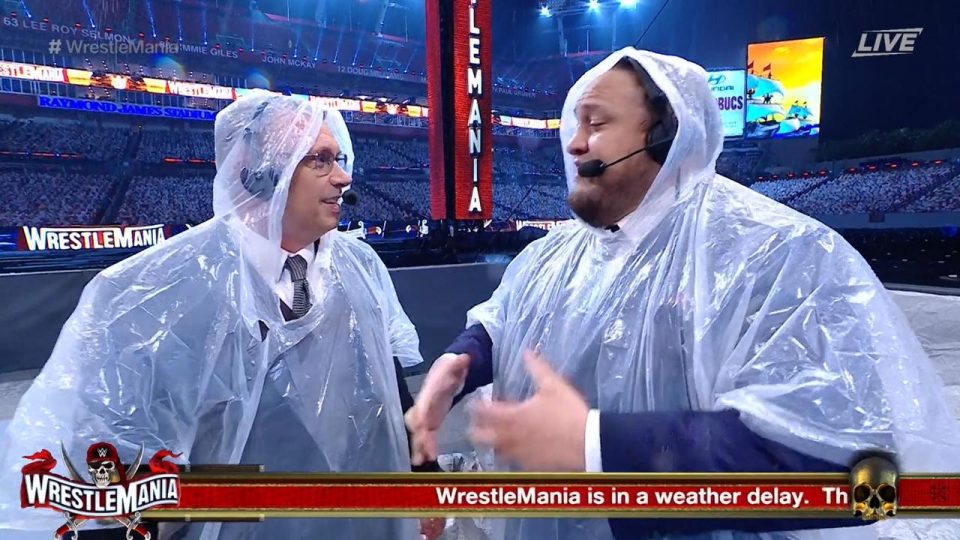 Bobby Lashley, who was WWE Champion going into the event, spoke to Inside the Ropes’ Kenny McIntosh for issue 18 of Inside the Ropes Magazine and recalled how he was “ready to explode” when he got word that their match was being put on hold due to weather, noting that it was hard to bring his energy down when he’d gotten so hyped to perform.

“I was inches away from just running over and punching Drew in the face and telling someone to just grab a camera. I was hyped, I was ready to explode. And then the rain happened and I was like, ‘I can’t bring this down, I don’t know if I can bring it down.’ I was running, I was doing sprints down the hall in the back, and we had some other stuff going on.”

Bobby Lashley continued, saying that he wanted to go out and have the match with Drew McIntyre despite the weather, even if it came to punching his opponent in front of a camera to see what happened.

“I was like, ‘Let’s just go out there, it doesn’t even matter. Let’s go, let’s make this happen, now! Why don’t you guys just get this camera, I’m gonna go punch Drew right in his face right now and see what he does. And let’s just make this happen. Let’s just brawl back here, we got to give them something. And we got to do something, because with all this bottled-up energy right now, it needs to get out.'”

In the end, though, Bobby Lashley was able to have his match with McIntyre after the weather calmed down enough for the performers to go on safely, and he said the anticipation from the extra waiting worked out in the end.

“Then to have the opportunity to go out there, and it not get cancelled, or called off or anything like that was awesome. Because it made them wait just a little bit more. Then suddenly we’re ready and it’s, ‘NOW, give it to them!’ So I was cool with how it all ended up.”

When the show finally got started, Bobby Lashley would go on to defeat Drew McIntyre to retain his WWE Championship. He remained the WWE Champion until losing to Money in the Bank winner Big E later in the year, but became a two time champion when he defeated Brock Lesnar at the Royal Rumble with help from Paul Heyman and Roman Reigns.

Bobby Lashley is currently out of action with a shoulder injury and lost his WWE Championship back to Brock Lesnar at the Elimination Chamber. It is unclear when he’ll be able to return to the ring.

To read the entire interview with Bobby Lashley, you can order issue 18 of Inside the Ropes Magazine here. You can also subscribe to receive an issue every month and make sure you’re not missing on out interviews, opinion columns, and more!