Alexa Bliss has shown off some new body art as she prepares to return to Monday Night Raw.

Former Raw Women’s Champion Alexa Bliss hasn’t been seen on WWE television since she was defeated by Charlotte Flair at Extreme Rules back in September. PWInsider reported shortly after Alexa Bliss last appeared that she was in fact due to undergo surgery on her sinuses and that was why she was forced to miss time off television.

However, it appears that the star’s hiatus is coming to an end.

On the January 3rd episode of Raw it was announced that Bliss will begin her “journey” back to WWE on January 10th.

Ahead of her return, Bliss has taken to social media to show off a number of new ear piercings, as she prepares for her comeback. You can see the images below. 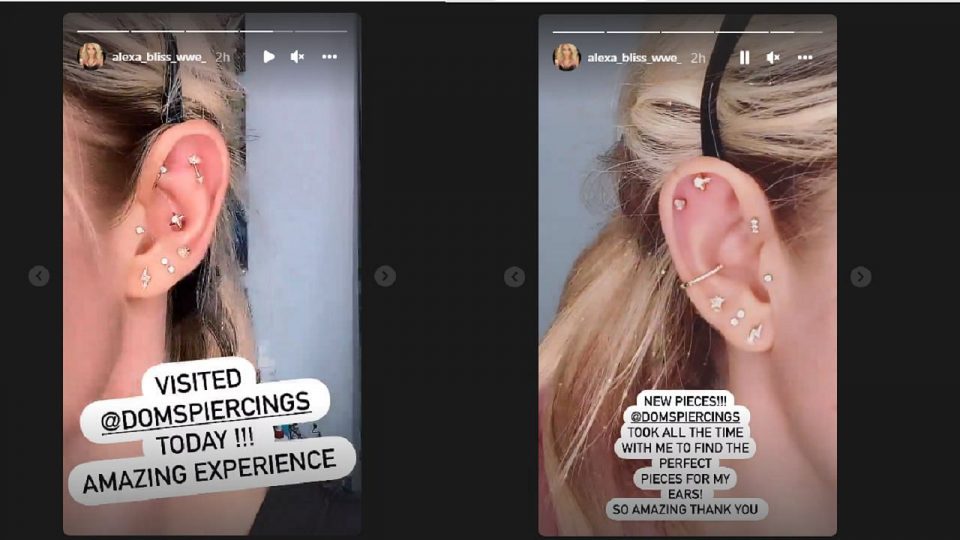 Although Bliss is a five-time Women’s Champion, she is probably best known for her most recent run alongside ‘The Fiend’ Bray Wyatt.

The alliance between the pair began to take shape in the summer of 2020 while Bliss was teaming with Nikki Cross. During this period, Bliss was attacked by ‘The Fiend’ and despite the best efforts of her partner, fell further and further under his spell.

As the partnership developed Bliss began using Wyatt’s Sister Abigail’ finishing move, standing by his side during his feud with Randy Orton.

At WrestleMania 37, Wyatt was defeated by Orton following the distraction from Bliss. This seemingly sent their pair their separate ways, with Wyatt disappearing from television altogether, before being released in July.

While Bliss was no longer appearing with ‘The Fiend’, she retained her creepy new persona along with her doll Lilly. In the months that followed Bliss feuded with Doudrop, Eva Marie and Shayna Baszler before setting her sights on Charlotte Flair.