Hangman Adam Page and Bryan Danielson will face off once again on January 5th, this time with a unique stipulation added.

Tony Schiavone announced on the latest episode of AEW Dynamite that an AEW World Championship rematch has been set for the first Dynamite of the New Year on January 5th before he introduced the reigning champion to the Greensboro crowd. 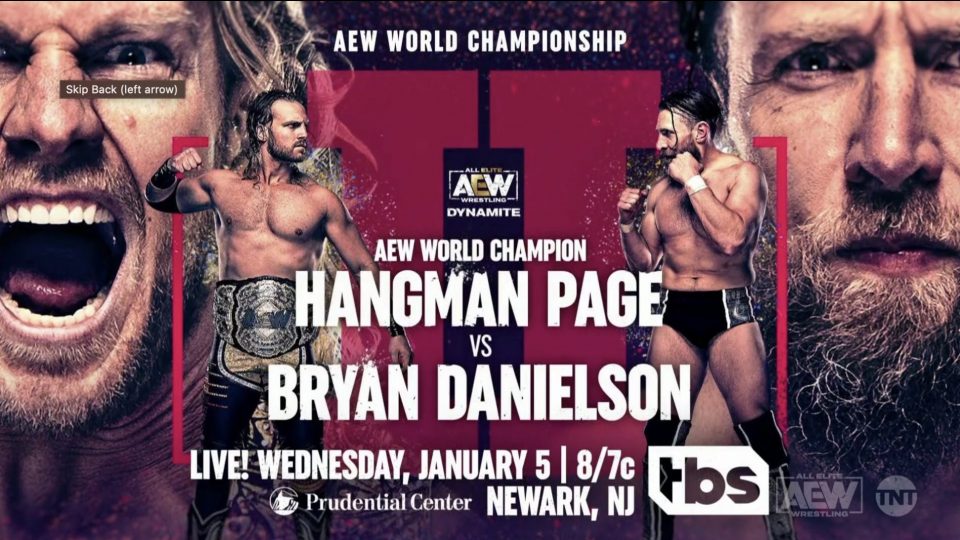 Hangman Adam Page then addressed the fans in attendance, shutting down their strong adulation and saying that he’s never felt like less of a champion after his epic 60 minute draw with Danielson on last week’s Winter Is Coming episode of Dynamite.

No no no, I’m gonna stop you early, because after 60 minutes covered in sweat, covered in blood. This arm barely is hanging on, all the air in my body gone. After 60 minutes I was handed back this championship.

And as we went to commercial I managed to walk my way back up the ramp and I looked back into this championship, I could see my face in it. And I thought it was funny that in my three years here in AEW, last week I had never felt like less of a champion.

Page was interrupted by Bryan Danielson, who ran down the crowd and claimed that he will not wrestle again until their match on January 5th.

Danielson proposed that during their match on January 5th the pair be subject to judges. He claimed that inn the event of another draw, Hangman will not be able to hang onto his title. As the crowd booed, the American Dragon said that he had clearly won their bout last week and called Adam Page an “entitled Millennial cowboy.”

Hangman Page responded by telling Danielson that he would have won the match if he had three more seconds to pin him after the Buckshot Lariat, but accepted the stipulation of judges at ringside. He also pointed out that Bryan Danielson brought out the best in his as prior to last week’s bout, the AEW World Champion had never competed in a singles match lasting over 30 minutes.

This will be AEW’s second bout to feature a judging panel, the first taking place in an AEW World Championship match between Chris Jericho and Cody Rhodes in November of 2019.