Some major shakeups happened at SEAdLINNNG’s show Shin-Kiba NIGHT on May 26th from none other than Shin-Kiba 1st RING in Tokyo, Japan.

Two of the biggest shocks of the night happened back to back.

Right after ASUKA (Veny) and Makoto of Las Fresa de Egoistas became the new Beyond the Sea Tag Champions by defeating the dominant team of Arisa Nakajima and Nanae Takahashi, AEW’s Ryo Mizunami returned to her home promotion.

But Ryo wasn’t after the tag titles, she had come back to Japan for the Beyond the Sea Single Championship, currently held by the new tag champion ASUKA. 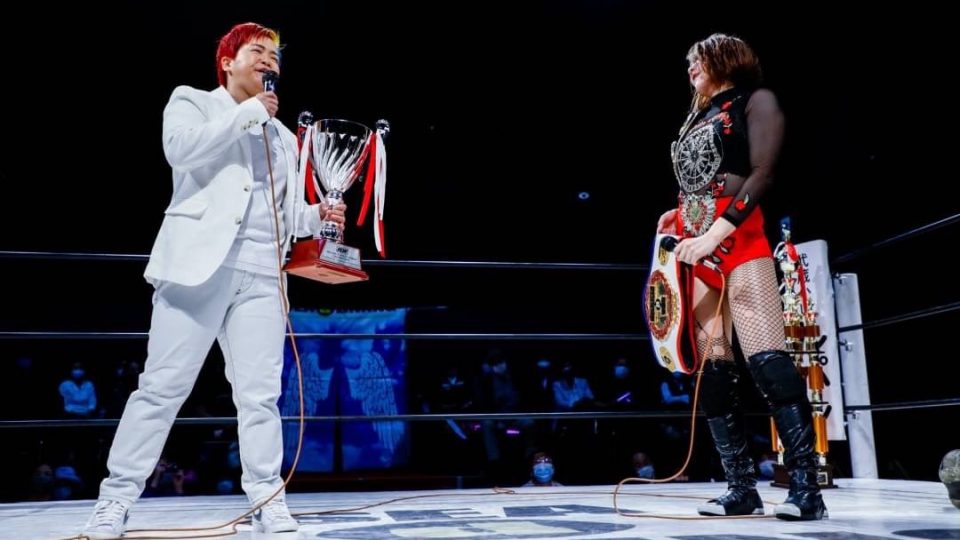 With ASUKA holding both the titles, they are now the number one target in the promotion, but for someone of their calibre, this will only emphasise just how good they are and will certainly put them on the next level.

Before Ryo gets her hands on ASUKA, it looks like she will have to prove herself upon her return by defeating Nanae Takahashi, her partner in MAX VOLTAGE who she held the Beyond the Sea tag titles with in 2020.

While it’s not certain how long Ryo will be in Japan before returning back to AEW, fans may see her face her fellow AEW alumni ASUKA sooner rather than later.

Also on the show, we saw a true battle of the generations when 35-year veteran Yumiko Hotta defeated the rookie of Las Egos, Riko Kaiju, who has only been wrestling since July 2020.

Though she was defeated, going up against someone the level of Hotta and having a strong showing signals just how bright her career prospects are.

Later in the show, Sasamura went on to join Las Egos, making them even stronger, with the entire unit now consisting of ASUKA, Makoto, Riko Kaiju and Ayame Sasamura… and Mima Shimoda when she makes her rare appearances.