It’s that time of year again when WWE gets extreme. Here is our rundown of all of the potential winners and losers from the big night.

On Saturday, October 8th at the Wells Fargo Center in Philadelphia, Extreme Rules goes down with all matches featuring violent stipulations to tickle our fancy.

Be it the Strap Match, the Extreme Rules atch or the Ladder Match, there is something for everyone, but there is one stipulation that tops them all. The introduction of the Fight Pit to the main roster is particularly intriguing and marks the first time it will be used on a WWE Premiere Live Event.

As well as this glorious violence, the person behind the White Rabbit saga is slated to be revealed during the show. WWE has been dropping clues and QR codes that take scanners into bizarre games that display dates, coordinates and hints to Bray Wyatt as the creator.

With such a plethora of extreme matches, and the potential reveal of the White rabbit, these predictions are going to be fun. 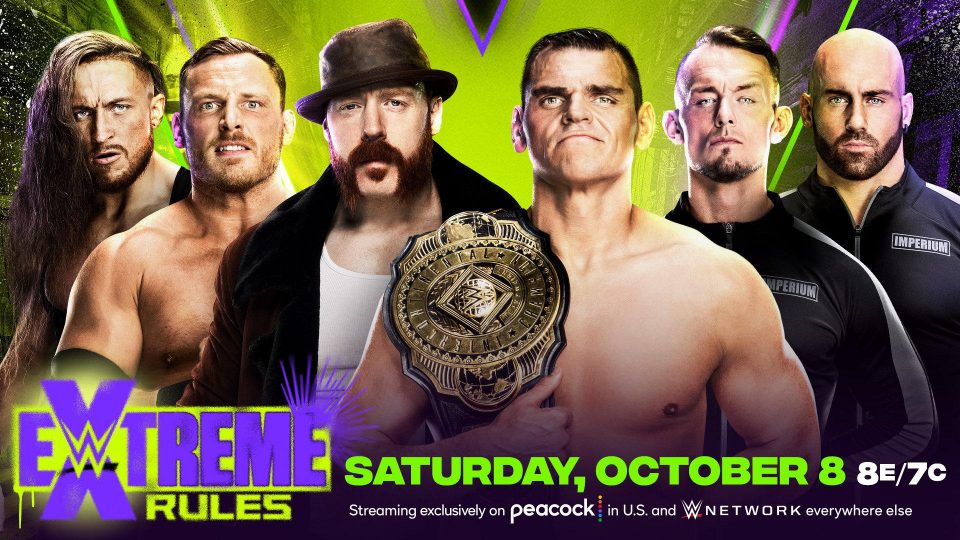 What actually is a Good Old Fashioned Donnybrook I hear you ask? Well, when Sheamus and Drew McIntyre met in this type of match it was an entertaining-as-hell hardcore-style brawl with stereotypical Irish paraphernalia thrown in for good measure. This time around the big Irish man brings his boys, Butch and Ridge Holland to the dance against the trio of Gunther, Ludwig Kaiser Giovanni Vinci.

Their disdain for one another continued as they have clashed again several times since and will do so again at Extreme Rules in one of WWE’s maddest stipulations.

Prediction: Regardless of the outcome this is going to be a tonne of fun from start to finish. All six men can go, especially the leaders, which will create an excellent display of violence.

Sheamus has been on the run of his career with his crew backing him up all the way but Gunther and crew seem to have his number. Ever since his debut, Gunther has dominated and as Intercontinental Champion and brought prestige back to the title. Therefore, expect to see Imperium emerge from the mayhem as the victors. 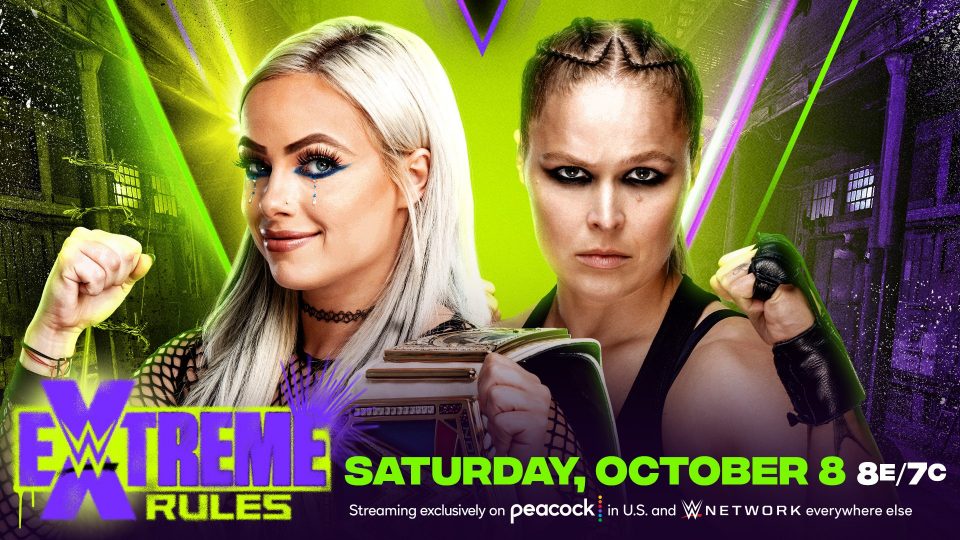 Liv Morgan steps into the ring with Ronda Rousey to defend the SmackDown Women’s Championship once again. Morgan won the title back in July when she successfully cashed in her Money in the Bank briefcase on Rousey. The two women met again at SummerSlam, a bout that saw the champion retain her title in a very one-sided affair, surviving via a fluke.

Unfortunately, the result didn’t work in Morgan’s favour and made her look weak against Rousey and she has been fighting to prove herself a worthy champion since. Victories over Shayna Baszler and Lacey Evans have done little to add credibility to her title run but now she gets a chance to establish herself against Rousey in an Extreme Rules match.

After failing to regain the title at SummerSlam the former UFC star snapped and turned heel attacking both Morgan and the referee resulting in her suspension. The suspension lit a fire under Rousey who tore through the rest of the women’s division to get back to title contention.

Prediction: This is make or break time for Liv Morgan as women’s champion and Rousey is more than capable of being the one who breaks her. However, the Extreme Rules stipulation works in favour of the champion as she has an array of weapons to keep her opponent at bay. But unfortunately for Morgan, Rousey also has access to the same arsenal and is much more accustomed to using them.

WWE has also been teasing a potential partnership between Rousey and Baszler. Over the few months, Rousey has urged Baszler to rekindle her killer instinct and become the badass she once was. This possible tandem could spell curtains for Morgan’s title run and the entire women’s division.

Once again the odds are stacked against Morgan and despite a valiant display of heart and determination, she will be unable to stave off Rousey’s assault and fall to a barrage of violent offence relinquishing the title in the process. 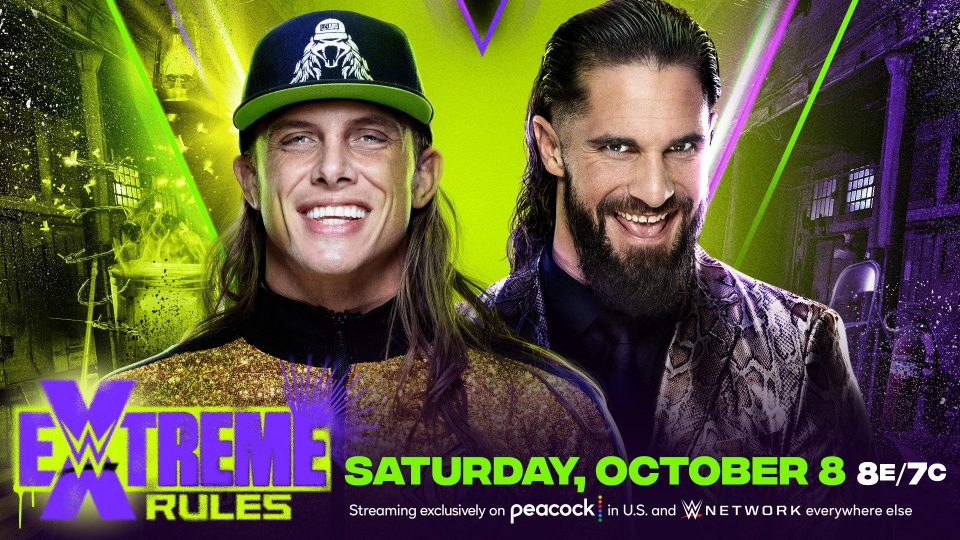 These two have been at each other’s throats for months and despite an intense battle at Clash at the Castle that saw Rollins claim victory their rivalry is far from over.

The bad blood between Riddle and Rollins has seen personal attacks, pull-apart brawls and now they are headed toward a match at Extreme Rules that’s never been seen on WWE’s main roster!

While the Fight Pit makes its WWE debut fans of NXT will recognise the brutal structure as it has been featured twice on the black and gold version of the brand. The first time saw Riddle take on Timothy Thatcher in May of 2020, with Thatcher using the stipulation once again when he faced off against Tommaso Ciampa in January 2021.

It is an intimidating and unforgiving structure designed for violent close-quarter combat. Such brutality requires the right referee to oversee the violence and keep control of the combatants. UFC Hall of Famer Daniel Cormier steps into that role bringing decades of fight experience and legitimacy to proceedings.

Prediction: Rollins holds a victory over Riddle heading into this match but the former UFC star has the advantage. Rollins is yet to enter the Fight Pit while Riddle has one such match under his belt.

The personal hatred between the two and the stipulation attached makes this match very interesting but the addition of Cormier as the Special Guest Referee adds further intrigue to the fight. He will no doubt get physical with at least one of the fighters, most likely Rollins, costing the bout and setting up a potential rivalry between the two.

Cormier is a longtime WWE fan and revealed that he had previous conversations with the company about a possible on-screen role. Now his debut is confirmed at Extreme Rules it can’t be too alien to think a Survivor Series, Royal Rumble or WrestleMania appearance is in his future.

If the White Rabbit is Bray Wyatt, then this match could very well be the place he shows up. Rollins has previous with Wyatt and has gone on record stating he wants to fight him again. 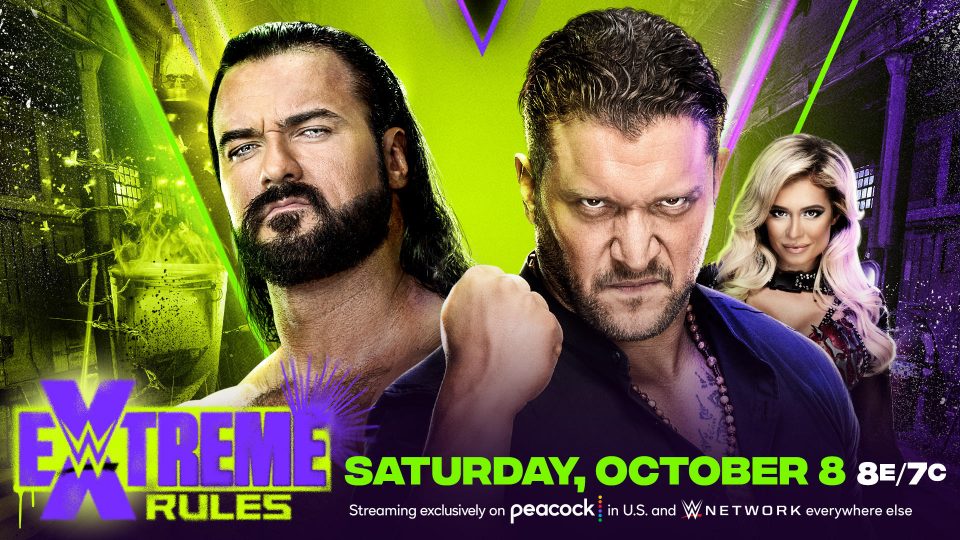 Since their surprise return to WWE Karrion Kross and Scarlett set their sights on Drew McIntyre. The spooky duo attacking the big Scot from the shadows whenever they see fit.

Sick and tired of being the victim of these hit-and-run attacks McIntyre challenged Kross to Strap Match guaranteeing there is no place to hide once in the ring. Kross and Scarlett accepted the challenge and escalated the feud by launching a fireball attack on the former WWE Champion.

Prediction: This is Kross’ first PLE match back in WWE and there is a lot riding on it. One of the main criticisms of Kross that hampered and ultimately ruined his run in NXT was his in-ring style. His first disastrous main roster run did little to dampen those doubts and we have not seen him fully perform on WWE since.

Kross’ smashmouth MMA-style of fighting meshes well with McIntyre’s brawling powerhouse move set and the match stipulation could also work in his favour. The very nature of a strap match is to engage your opponent at close range, which allows Kross to execute his suplex and submission-laden offence.

For Kross’ comeback to receive the necessary impact and to re-establish him as the destructive force he is portrayed as he must beat McIntyre. However, the former WWE Champion is coming off a big loss to Roman Reigns at Clash at the Castle and can’t afford another. But Kross needs this win more than McIntyre and fans will see the Herald Of Doomsday victorious as Extreme Rules.

This match also has the potential for the White Rabbit to reveal themselves. One of Kross’ former incarnations while with Lucha Underground was a character known as the White Rabbit, but both he and Scarlett lean toward the supernatural and could be introducing a new spooky member to the WWE roster. 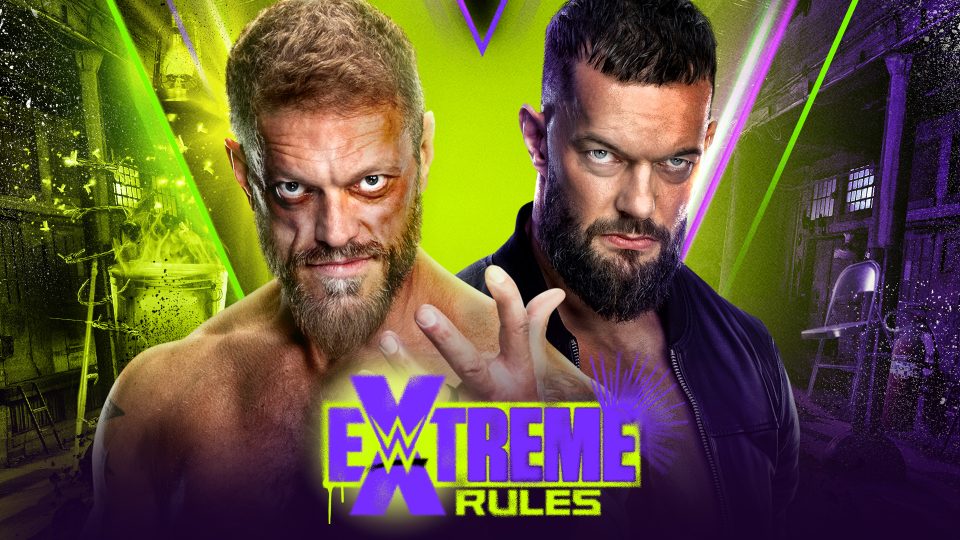 A match months in the making sees the former leader of Judgment Day Edge, go one-on-one against the man who usurped him, Finn Balor. The Prince orchestrated a brutal attack on Edge to oust him from the faction he created. Since then the 11-time WWE Champion has vowed to destroy Judgment Day.

Edge got a modicum of revenge when he returned and cost Balor and Damien Priest their match at SummerSlam against the Mysterios. However, the demonic group would get the last laugh when Dominick turned heel on both Edge and his father.

Edge fell victim to another vicious beatdown at the hands of Balor and his crew before making another surprise return to challenge the head of the goth/punk quartet to an “I Quit” match at Extreme Rules.

Prediction: This is the first time the two wrestlers have met each other in singles action which adds emphasis to an already high-stakes outing. Balor needs this victory way more than Edge does and with rumours circulating that he is in line for a major and long overdue push a win over the WWE Hall of Famer would be the perfect place to start.

Edge has done it all in WWE and since his big comeback in 2020 he has only lost 5 times out of the 18 matches he has competed in. Those losses came at the hands of Roman Reigns, Randy Orton and Seth Rollins, all legends of the business, so for Balor to be added to that list, it would provide the launchpad needed to elevate him to the next level.

The Judgment Day may not have any strong links to the White Rabbit teases, but they are constantly looking to recruit new members. Dominick Mysterio joined the group after turning to the dark side and AJ Styles has been the target of the faction as of late. Therefore, the White Rabbit could be next on the list as a new member of the group. 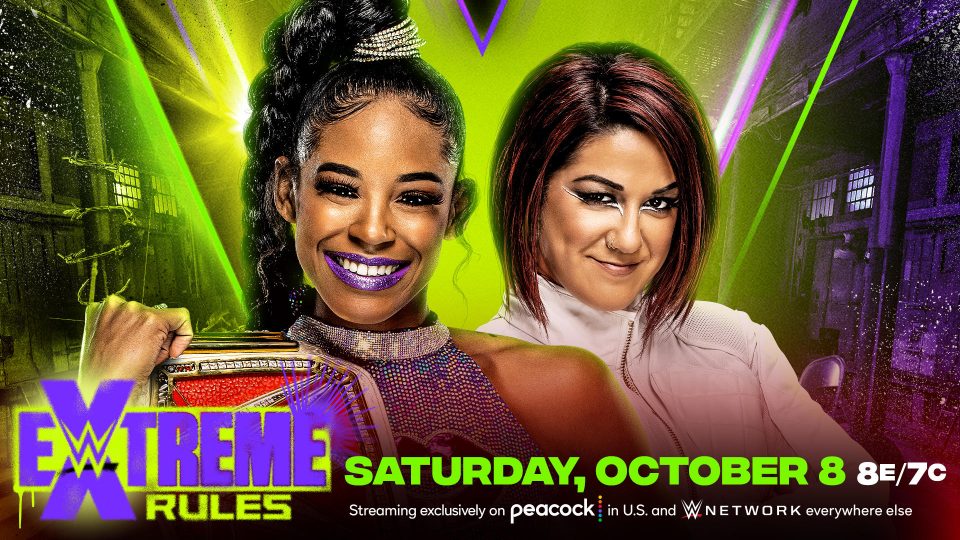 Since her return at SummerSlam alongside Dakota Kai and IYO SKY, Bayley has made it clear that she wants to take the Raw Women’s Championship off Bianca Belair.

The trio targeted Belair who called upon Alexa Bliss and Asuka as her backup. All six women met in a trios tag match at Clash at the Castle, which saw Bayley score the win by handing Belair her first pin-fall loss in over 300 days. Such an achievement added further fuel to the feud as Bayley proudly boasted about beating Belair in the lead-up to Extreme Rules.

After laying the champ out in a post-match beatdown Bayley challenged Belair to put her title on the line at the Premier Live Event. The following week the leader of Damage CTRL upped the ante by making it a Ladder Match.

Prediction: Bayley and Belair have a long history. For starters the Role Model was Belair’s first challenger when she won the SmackDown Championship in 2021. The two clashed at WrestleMania Backlash and inside Hell in a Cell last year, which saw Belair claim victory both times.

Almost 12 months later Bayley is back for revenge and the title. Despite Belair’s athletic prowess and power, she is certainly the favourite to claim it. The ladder stipulation allows Belair to remain strong in defeat and for inevitable gang warfare between the two groups. With Survivor Series WarGames right around the corner, it seems like we’ll be treated to some form of Damage CTRL vs Belair, Bliss, and Asuka in the steel structure, and Bayley capturing the title via nefarious means sets up WarGames perfectly.