For the fourth time, WWE Crown Jewel is set to take place in Saudi Arabia.

As always the show is stacked and features some first-time-ever match-ups most notably the Undisputed Title clash between Roman Reigns and Logan Paul and the battle of the beasts between Bobby Lashley and Brock Lesnar.

The full card is as follows:

A part from the matches taking place there will also be an appearance from Bray Wyatt. Since his return to WWE, Wyatt has shown a new and more humble side to his character as well as the introduction of the mysterious Uncle Howdy. It’ll certainly be interesting to see what version of Wyatt will we see at Crown Jewel.

Here’s what we think will go down at WWE Crown Jewel 2022. 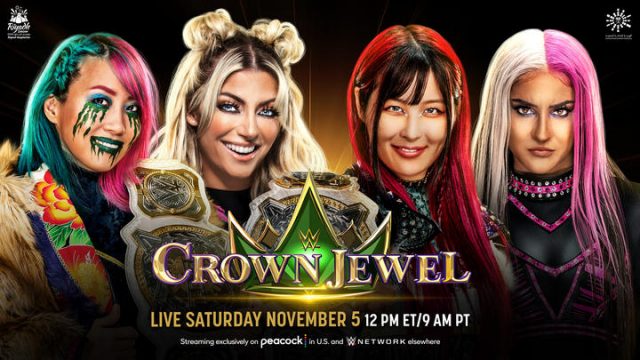 At Crown Jewel former WWE Women’s Tag Team Champions Dakota Kai & IYO SKY get the chance to get the titles back as they take on the new champions Asuka and Alexa Bliss.

The two teams have been rivals since the formation of Damage CTRL and it was inevitable the tag team titles would become part of their feud. Kai & SKY won the titles from Aliyah and Raquel Rodriguez before Bliss and Asuka defeated the champs to capture the gold.

Prediction: The title loss was another misstep in the booking of Damage CTRL. But with Survivor Series WarGames just around the corner, it seems to be further progression to get the two teams inside the steel structure and it would be great to see the Bayley-led trio wearing all the gold heading into the next Premier Live Event. Damage CTRL win. 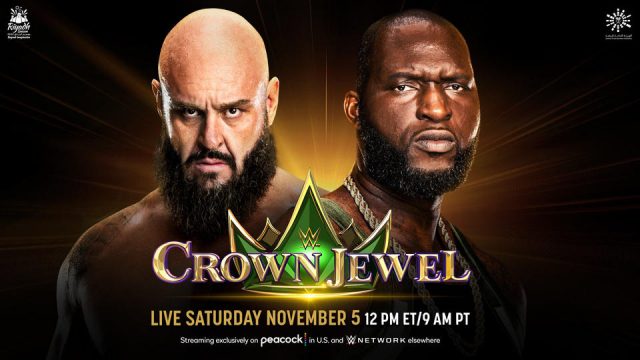 The two giants clash is what will undoubtedly be a spectacle if nothing else.

As WWE’s resident giant, Omos saw fit to square up Strowman when the Monster Among Men returned to the company and laid waste to all in his path. Now, the two behemoths will clash to see who is the most destructive force in the company.

Prediction: Strowman’s return to WWE despite not making a great impact seems to be a rebuilding project. So, expect lots of staring, shoving, possibly an old-school test of strength battles and a win for big, bad Braun.

The OC vs. The Judgement Day 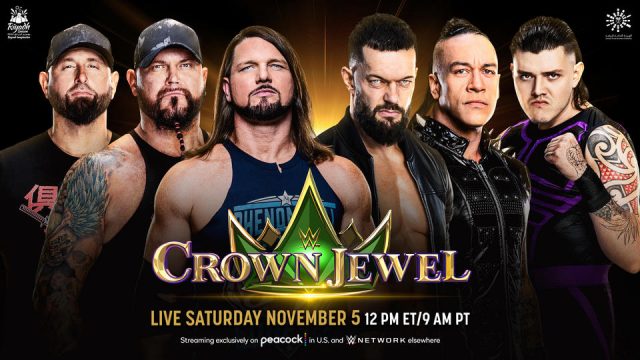 AJ Styles was the target of Finn Balor and his merry band of goths for some time as they tried to recruit them to the group. Styles called upon his old running buddies the Good Brothers as backup, ushering in the reformation of the OC.

Since the return of Gallows and Anderson, the two factions have been at odds ending resulting in several all-out brawls.

Prediction: Despite their 100% commitment to their roles, Judgment Day feel like they are nearer their ceiling as a group. The Good Brothers on the other hand could be one of WWE’s most dominant tag teams given the opportunity. Therefore, it makes much more sense to give them the win and kickstart their WWE career once again. 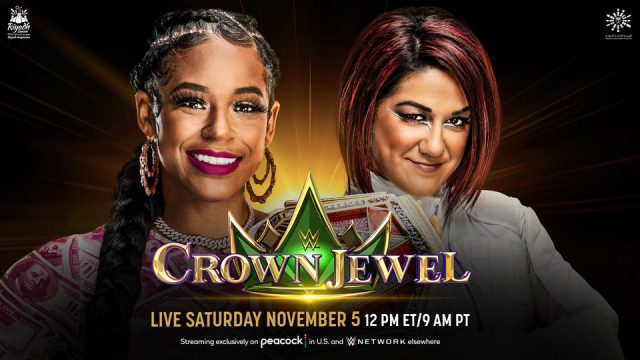 Following her loss to Raw Women’s Champion Bianca Belair at Extreme Rules in a Ladder Match, Bayley will get one more shot at the gold. This time in a Last Woman Standing Match.

Upon her return to the company, at this year’s SummerSlam after an injury-enforced absence, Bayley picked up where she left off and went straight after Belair, and her title. Prior to the injury Belair and Bayley were supposed to have an “I Quit” Match at the 2021 Money in the Bank for the SmackDown Women’s Championship. However, due to Bayley’s injury, that match didn’t happen.

The Ladder Match result did little to squash their rivalry and the Oct. 24 episode of Raw Bayley scored a vital win in a non-title bout over the EST allowing for the fresh challenge.

Prediction: To the surprise of many Belair retained the title at Extreme Rules as it gave WWE a clear out to take the belt off her while keeping her strong in defeat. The Last Woman Standing stipulation also allows this to happen and Bayley has to win in order to make Damage CTRL an actual threat going into Survivor Series WarGames. 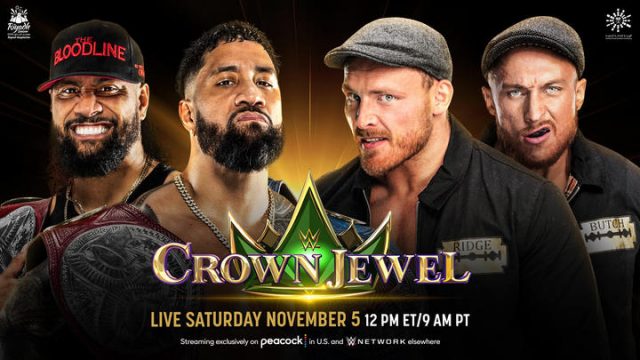 The Bloodline put the Undisputed Tag Team titles on the line once again against Ridge Holland and Butch. The last time they met over the championships the Usos retained.

Since that meeting, the Bloodline turned their focus on Sheamus and bust up his arm in a brutal chair-assisted attack. Holland and Butch got a modicum of payback by beating Sami Zayn and Solo Sikoa. Now, at Crown Jewel, they attempt to get full payback and the titles.

Prediction: This has the potential to be the match of the show as both teams are on fire right now. But the Usos have had a tight grip on the Raw and SmackDown Championships and will continue to do so in Saudi Arabia. 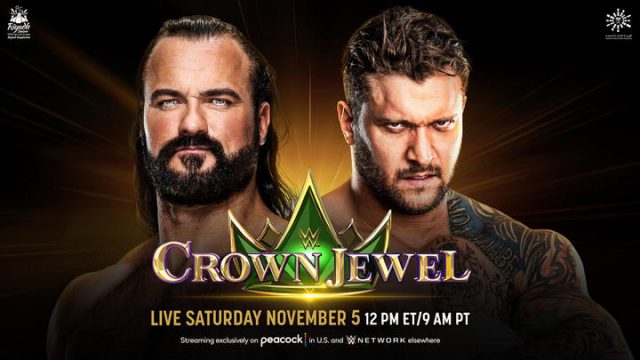 After beating the hell out of each other at Extreme Rules in a Strap Match, Kross and McIntyre will do so once more but this time inside the confines of a steel cage.

Since returning to WWE Kross and Scarlett set their sights on taking out McIntyre and did everything they could to make his life a living hell.

The rivalry only escalated after these two last fought with McIntyre brutally attacking Kross in the parking lot setting up their match in Saudi Arabia.

Prediction: McIntyre is in desperate need of a victory after losing on two consecutive events. Kross already holds a win over the big Scot meaning a rubber match is in store for us further down the line. 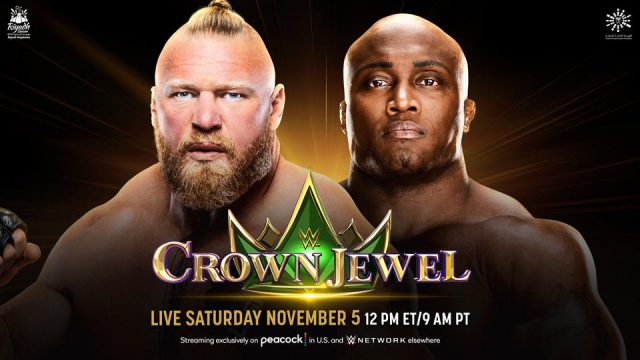 The Beast returned to WWE and immediately took out Bobby Lashley with two F-5s. The attack cost him the United States Championship despite a valiant effort. The following week the All-Mighty sought vengeance and brutally assaulted Lesnar resulting in only their second singles match in WWE.

The two stars met in a long-awaited and highly-anticipated match at Royal Rumble earlier this year. Unfortunately, the bout didn’t live up to the hype and served only to further the feud between Lesnar and Reigns. Now, WWE gets the opportunity to give the match all of the pomp and circumstance it deserves.

Prediction: Lashley could do with a big win to get him back to the main event level but Brock Lesnar is coming back after two unsuccessful title challenges and is undoubtedly out for blood. 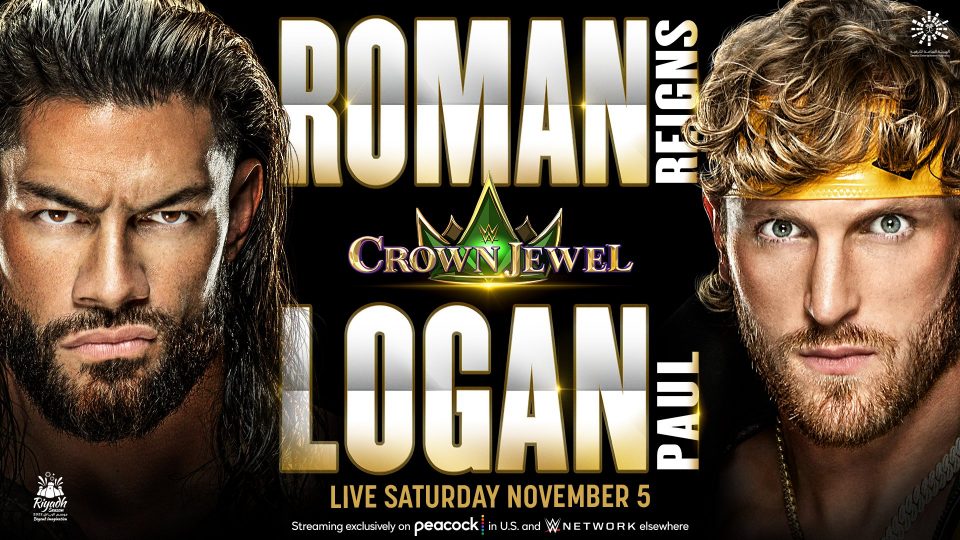 After just two albeit impressive matches Logan Paul stepped up to the Tribal Chief and the Undisputed WWE Universal Championship. The social media titan confronted the Bloodline and invited Roman Reigns to the press conference in Las Vegas where the match was made official in front of the world’s fight media.

Following the match announcement, Paul threatened Reigns with his one-punch knockout power while the Tribal Chief laughed off the idea much like the entire WWE fanbase.

Prediction: This is probably the most predictable match of the year as there is no way Paul defeats Reigns here. However, that doesn’t mean it isn’t going to be a fun outing. Reigns and Paul make for very interesting opponents and will therefore produce a decent match despite the inevitable outcome.