The WCW World Championship was established in 1991 after WCW split from the National Wrestling Alliance and could no longer utilise the NWA name.

The inaugural WCW World Champion was Lex Luger, who defeated Barry Windham at The Great American Bash event on July 14, 1991. The title was active for a decade. When WCW was purchased by the WWF in March 2001, the WCW World Championship was brought into the company. It was merged with the WWF World title at Vengeance on December 9, 2001.

There were 22 wrestlers who held the WCW World title. However, only seven of those men didn’t hold the strap on multiple occasions. This article lists those wrestlers who only captured WCW’s richest prize once.

The original plan was for Vader to defend the title against Sting in a rematch of their battle at The Great American Bash three weeks earlier. However, Sting was injured and Simmons was drafted in to replace him. With his title win, Simmons was recognised as the first ever African-American World Champion in wrestling history.

Despite this hugely significant milestone, Simmons failed as champion. This was due in part to a dearth of credible challengers. He fought The Barbarian in the semi-main event of Halloween Havoc later that year. Simmons dropped the title back to Vader on December 30 at a WCW House Show in Baltimore, Maryland. The mechanical Simmons failed to generate an emotional connection with the WCW fans and his limited move-set wasn’t suited to main events. Most crucially, he wasn’t a draw at the live gate.

For these reasons, following his title defeat, Simmons was never considered for another World title reign by any company.

When one considers that the likes of Jeff Jarrett won the WCW World Championship on four occasions (in a six week period) and Ric Flair won the title three times after he turned 50, it is mind boggling that the man deemed to be the wrestler to lead WCW into the new millennium and beyond had just one single solitary WCW World title win.

Goldberg won his first and only WCW World title from Hollywood Hulk Hogan in an electric battle at the Georgia Dome in Atlanta on July 6, 1998. ‘Da Man’ speared his way through the competition for five months until the infamous Starrcade 1998 main event.

Squaring off with Kevin Nash, Goldberg appeared to have the match in hand, when Nash’s on/off buddy, Scott Hall tasered the champion. One powerbomb later and Nash was WCW World Champion (for a week at least). Goldberg’s 173 match winning streak and World title reign was over. A succession of injuries and backstage politics denied Goldberg a second World title run over the next two and a half years.

He would not win a World title again until he captured the WWE World Heavyweight Championship from Triple H in September 2003, two and a half years after WCW closed it’s doors. 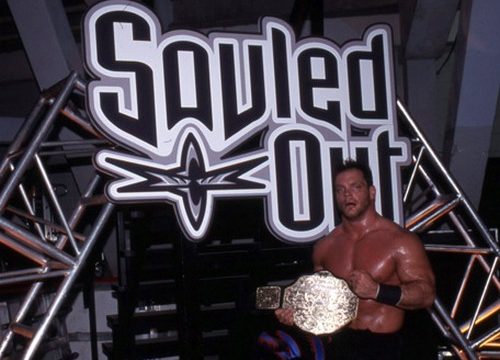 Chris Benoit was WCW World Champion for just one day. He defeated Sid Vicious in the main event of Souled Out on January 16, 2000.

The title had previously been vacated by Bret ‘Hitman’ Hart who was forced to relinquish the belt due to a serious concussion. A concussion which would ultimately prove to be career ending. Benoit was awarded the title as a way to convince him to re-sign with WCW. ‘The Crippler’ had become frustrated by a lack of opportunities in the main event picture. However, despite his World title win, Benoit was unconvinced WCW management would back him as champion. Therefore, he walked out of the company and joined the WWF.

He made his first appearance in the Federation two weeks later, alongside Eddie Guerrero, Perry Saturn and Dean Malenko, who jumped ship with him. It’s possible, had he remained in WCW, Benoit would have been afforded additional reigns as champion.

He would go on to win the WWE World Heavyweight Championship from Triple H in the headliner of WrestleMania XX.

One of the most infamous title changes of all time is remembered as the death knell of the WCW World title and the company itself.

In April 2000, WCW was in it’s first few weeks of the Vince Russo/Eric Bischoff era. The ‘Dream Team’ had been drafted in to recover the fortunes of the ailing league. Russo and Bischoff’s grand idea was a feud between WCW’s ageing headliners (The Millionnaire’s Club) and the company’s younger talent (The New Blood). In a further bid to boost WCW’s declining viewership and inject some mainstream publicity, WCW struck a deal to feature Scream actor, David Arquette on it’s programming.

Arquette had starred in the WCW movie, the critically panned, Ready To Rumble, which had just been released into cinemas on April 7 that year. After interjecting himself into The New Blood’s business, Arquette was paired with WCW World Champion, DDP to square off with Jeff Jarrett and Bischoff. The bout was specially stipulated in that the wrestler who scored the winning fall, would be declared champion.

When Arquette pinned Bischoff, he was declared the new WCW World Champion, despite being on the same team as the reigning champion heading into the match. The booking was nonsensical and the decision to anoint Arquette champion didn’t garner much publicity. What it did do was alienate WCW’s existing fan-base and drove many of them off permanently.

Arquette held the title for 12 days and defended the strap in the main event of Slamboree 2000 in a Triple Threat Triple Cage Match, with DDP and Jarrett. In another slice of crazy booking, Arquette swerve turned on DDP and allowed Jarrett to reclaim the title.

Perhaps the most damaging World title change of all time.

On the subject of damaging World title changes, Vince Russo booked himself to win the title in what was the final insult for the once proud title lineage.

Russo challenged Booker T for the gold in a Cage Match on the September 25, Nitro. After being pasted by the champion for the entirety of the bout, an interfering Goldberg (who was also feuding with Russo) interfered and speared Russo through the cage wall.

As the challenger technically exited the cage first, he was declared the new champion. What’s worse was that Booker T seemed unconcerned about losing the title. He even fist bumped Goldberg post-match despite ‘Da Man’ costing him the belt.

To add to the pointlessness of the title change, Russo vacated the belt the following week. Booker T regained the strap on the very same episode of Nitro. 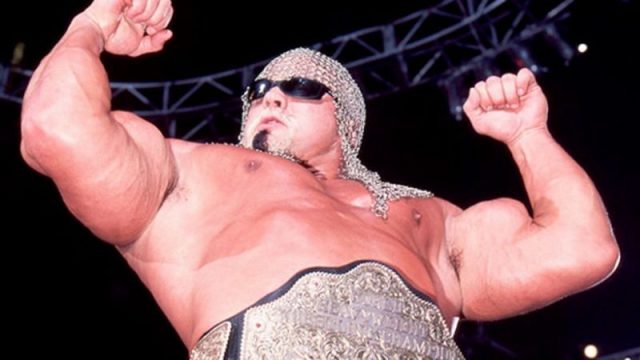 One of the only bright spots during the dying days of WCW was the ascent of Scott Steiner to WCW World Champion.

Steiner had wrestled as part of a tag team with his brother, Rick for a decade. However, in a major shock, he turned on his sibling at SuperBrawl VIII on February 22, 1998 and joined the nWo.

From there, Steiner captured WCW’s mid-card titles as he ascended the card. ‘Big Poppa Pump’ finally won the big one when he defeated Booker T at Mayhem on November 26, 2000. Steiner’s reign as champion lasted four months. He dropped the strap back to Booker T on the final episode of Nitro on March 26, 2001.

Steiner was relieved of the belt as he had not agreed to join the WWF after they purchased WCW. Booker T, who had agreed to sign with the WWF was awarded the title instead. If WCW had survived, there is every chance, Steiner would have enjoyed further reigns as champion.

However, this remains the solitary World title reign on ‘Big Poppa Pump’s’ resume.

Booker T brought the WCW World Championship to the WWF in the summer of 2001 as WCW (and later ECW) forces invaded the Federation.

The reign was a short one and ended four days later on Raw after Stone Cold interfered. The Olympian dropped the belt back to Booker T who became a five time champion. Angle diverted into a WWF Championship feud with Stone Cold, whom he defeated for the WWF belt in September.

The WCW World title was unified with the WWF Championship at Vengeance on December 9, 2001.

You can watch every single WCW World Championship change exclusively on the WWE Network.