The first SummerSlam event took place on August 29, 1988. In the three decades since, it has become a staple on WWE’s pay-per-view calendar and host to a plethora of pivotal moments in the history of the company.

This feature looks at the wrestlers who have competed in more SummerSlam main events than anyone else.

The following year, Hogan and Savage met on opposite sides of the squared circle, as ‘The Hulkster’ tagged with Brutus ‘The Barber’ Beefcake versus Savage and Zeus. In 1990, Hogan competed in the semi-final match versus Earthquake as The Ultimate Warrior headlined against Rick Rude.

Hogan returned to the main event in 1991, as he teamed with The Warrior to take on Sergeant Slaughter, Colonel Mustafa and General Adnan. ‘The Hulkster’ departed WWE in 1993 and would not return to the company until 2002. He would wrestle in one more SummerSlam main event in 2005 in his first (and only) ever meeting with Shawn Michaels.

John Cena has competed in five SummerSlam main events. If his Universal Title clash with Roman Reigns headlines SummerSlam 2021, then he will move up this list. Cena headlined his first SummerSlam in 2006, when he failed to wrest the WWE Championship from Edge.

The following year, he successfully defended the WWE Title versus Randy Orton in the headline spot. Cena and Orton had to settle for the semi-final position in 2009 but Cena returned to the main event in 2010 as the leader of Team WWE versus the Nexus.

His final SummerSlam main event occurred in 2014 when he lost the WWE Championship in convincing fashion to Brock Lesnar. Considering Cena has been a main event player in WWE for almost 20 years, it is surprising he has headlined the ‘Hottest Event of the Summer’ so infrequently.

The Undertaker is most synonymous with the Survivor Series wherein he made his debut in 1990 and won his first WWE World Title in 1991 and WrestleMania for his legendary 21-0 winning streak.

However, ‘The Phenom’ has also enjoyed considerable success at WWE’s Summer Spectacular. The Undertaker headlined his first SummerSlam event in 1994, when he competed against his own doppelganger.

The ‘Deadman’ defended the WWE Championship in the main event of SummerSlam 1997 versus Bret ‘Hitman’ Hart. That bout dealt ‘Taker his second consecutive loss at SummerSlam. That streak extended to three, the following year, when ‘The Lord of Darkness’ headlined SummerSlam again in another losing effort versus Stone Cold Steve Austin.

‘The Deadman’ officially retired from the ring at the 2020 Survivor Series. He will not headline another SummerSlam pay-per-view.

Randy Orton was just 23 years old when he headlined his first SummerSlam pay-per-view in 2003. Orton was part of the Elimination Chamber bout with the World Heavyweight Championship on the line. ‘The Legend Killer’ wasn’t successful on that night but 12 months later he would become the youngest WWE World Champion in history when he dethroned Chris Benoit in the SummerSlam 2004 headliner.

Orton challenged John Cena for the WWE Championship in the main event of SummerSlam 2007 but came up short on this occasion. ‘The Viper’ would not compete again in the SummerSlam headliner until 2013. Orton cashed in his Money in the Bank briefcase to defeat Daniel Bryan, moments after Bryan had dethroned John Cena for the gold.

Orton’s final SummerSlam main event to date, came back in 2016 in a losing effort against Brock Lesnar. At 41-years-old, Orton is young enough to headline many more SummerSlams before ending his career. He would need to headline at least three more SummerSlams to match the record, however. 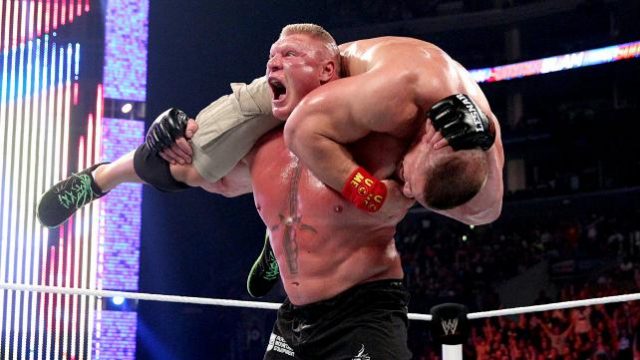 ‘The Next Big Thing’ only competed at one more SummerSlam event before he departed WWE following WrestleMania XX. A full decade after his first SummerSlam main event, Lesnar finally competed in his second. ‘The Beast’ crushed Triple H in the SummerSlam 2012 headliner.

Lesnar returned to the SummerSlam main event in 2014 when he battered John Cena senseless to capture the WWE Championship. That kicked off a run of six consecutive SummerSlam headliners for Lesnar. He lost in screwy circumstances to The Undertaker in 2015, knocked out Randy Orton in 2016, turned back the challenge of Braun Strowman, Roman Reigns and Samoa Joe in 2017 and dropped the Universal Title at back to back events in 2018 and 2019 to Roman Reigns and Seth Rollins respectively.

Lesnar will not headline SummerSlam in 2021. Will he main event the show again in 2022? Only time will tell.

You can watch every SummerSlam event exclusively on the WWE Network.