Making its debut in the early ’80s, the “Dokugiri”, “poison fog” or “poison mist,” has lasted the test of time and become a staple in heelish wrestling tactics.

Coming in many colours, “The Mist” has different properties. It can distract, burn, or in some cases even blind an opponent, and makes a great alternative to salt or the always risky (in danger, or just sheer botch terms) fireball.

It’s also a visually compelling act, with everyone in the arena being able to see the spit spray no matter where they are sat.

Although kayfabe may want you to believe that the mist is expelled from a gland or the pits of one’s stomach, the reality isn’t quite as gross.

A small bag or balloon of coloured liquid (sometimes even Kool-Aid) is placed in the mouth at some point during the match, ready for the user to burst it with a bite and blow into the direction of the opponent.

Before we delve into five of its most iconic users through history, an honourable mention to Triple H’s water fountain entrance. No doubt many school teachers in the early ’00s questioned “WTF!?” when they witnessed one of their students standing on a wall, spraying their juice box and declaring themselves as “THE GAME-AH!”

I mean, we all used to do that, right? 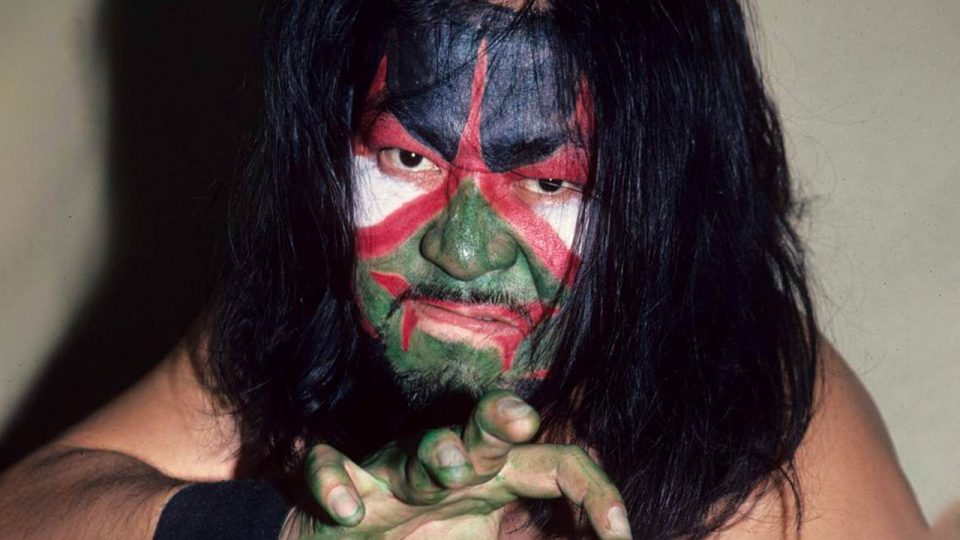 Many people believe the origins of the mist lie in Japan, but that’s only half right. One thing that is for sure is that the innovator was one Akihisa Mera.

In the early ’80s under the guidance of manager Gary Hart, Mera, would adopt his most famous gimmick, The Great Kabuki. It was also during this time he would debut the mist.

According to Hart’s book “My Life In Wrestling”, the move was invented in Hart’s kitchen, after his wife had just made some cookies using green food dye.

Using the die, mouthwash, and a condom (because the move wasn’t nasty enough already) Hart and Kabuki tested the mist in Harts’s garden, with great success.

The Great Kabuki, already terrifying with his oni mask and face-paint, now had a demon-like weapon to put into his arsenal. 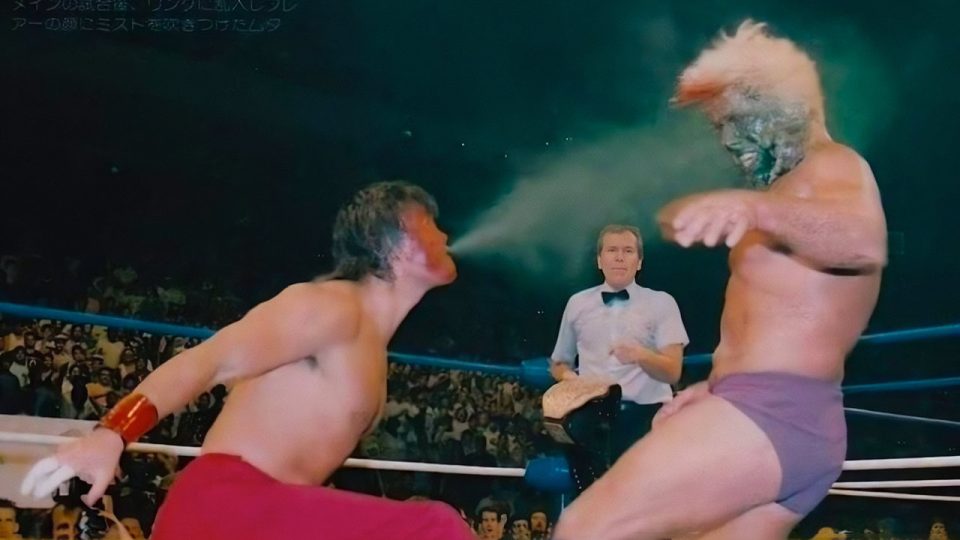 Hart would go on to manage The Great Muta, who was billed as Kabuki’s son (but not really). Muta would also use the mist, helping cement its place in wrestling history. 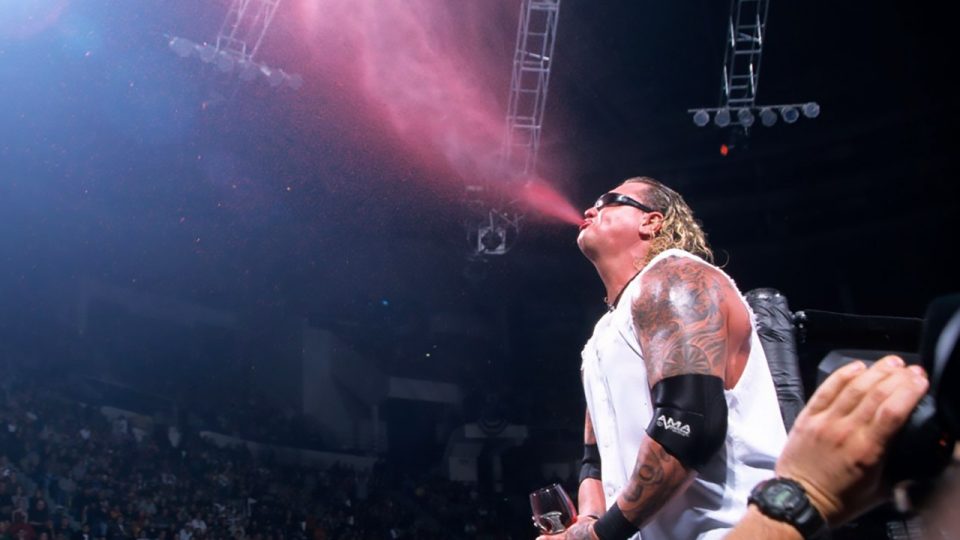 Let’s face it, if you look at the vast majority of mist users, you could probably put the move down as stereotyping. At least with Gangrel and the red mist, the stereotyping makes sense as his gimmick is A VAMPIRE! BLAH!

Sorry for any offence caused to any vampires reading.

Gangrel would normally perform his mist as part of his epic entrance.

After rising in the style of a Johnny Cash song (in a ring of fire) and making his way to red lit ringside whilst his breathy entrance music played through the arena, the fanged one would stand at a corner of the ring, ceremoniously take a sip from his goblet and gob the blood like liquid all over the crowd.

That’s not to say he didn’t spit red on his opponents. One noteworthy example was after a match with a young up-and-comer named Edge during an episode of Raw in September 98.

Following a double count out after Gangrel hit Edge with a DDT outside of the ring, he would spray blood all over the yet to be R Rated Superstar.

This would serve as a prelude to the debut of Christian and the formation of The Brood. 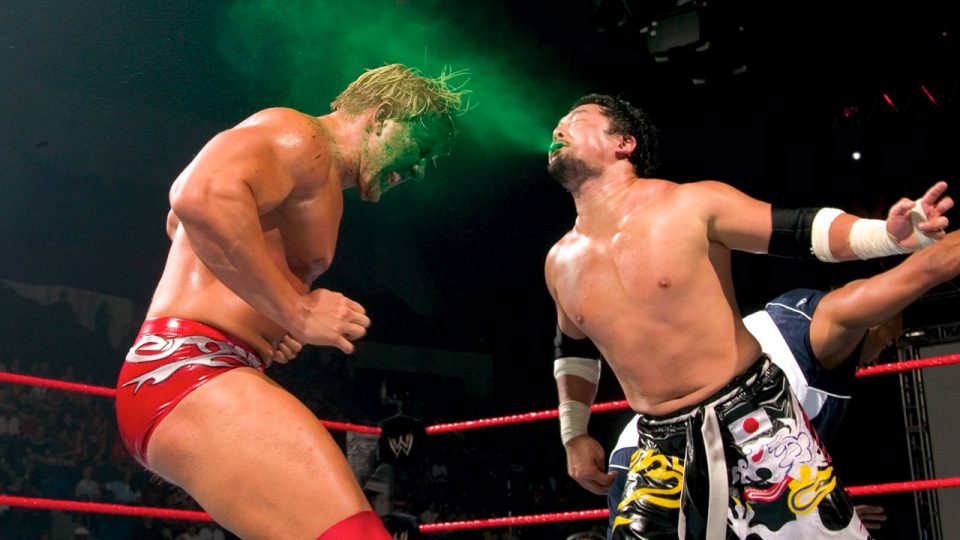 People tend to forget just how over Tajiri was during his time in the WWE.

The Japanese buzzsaw was unlike any other wrestler on the roster, with a unique move set that included the buzzsaw kick, the tarantula submission and of course, the green mist (although sometime he would rock out a super evil black mist).

Along with his baggy trousers, Tajiri’s usage of the mist was a tribute to one of his wrestling mentors The Great Muta.

Whether making the crowd boo when using the nasty spray as a heel or making them giggle with his disgustingly silly spittle as a face, Tajiri could play both roles expertly.

For many of us who grew up with The Attitude Era, it was our first exposure to the green mist, and for many fans, Tajiri is the first face that pops up in our heads when someone mentions the term. 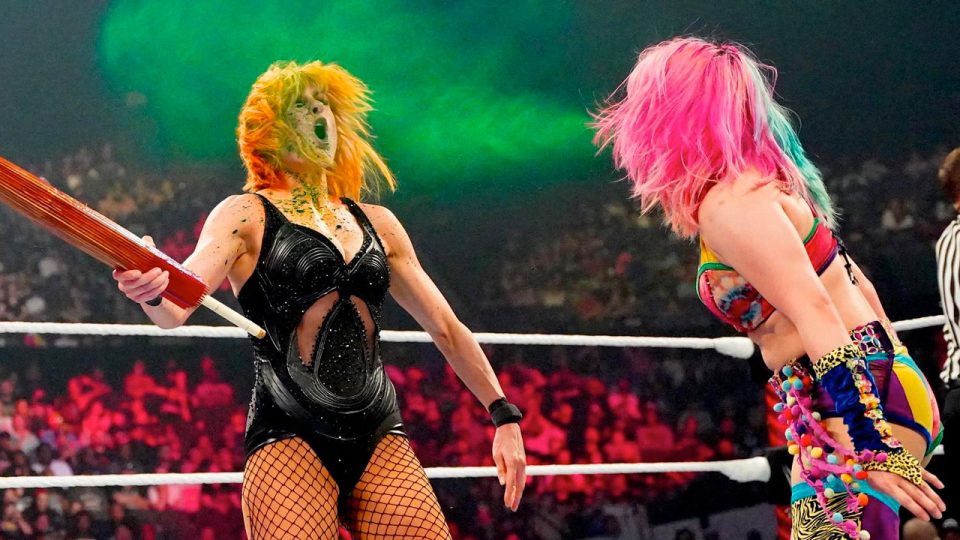 Asuka has time and time again proven herself to be one of the greatest women wrestlers of all time.

After her Goldberg-esque winning streak came to an end it was time for a new dawn for the Empress Of Tomorrow.

In April of 2019 Asuka would join forces with Kari Sane. Under the team moniker of The Kabuki Warriors, Asuka laid hints at her future when her own Kabuki mask that she wore during her entrances started sporting a new green drip design…

Eventually, The Kabuki Warriors would fall to the dark side, or the green side rather, with Asuka cementing her new heel status by using the green mist to help capture tag gold.

She would further display her commitment to the move by changing her iconic line face makeup in favour of green drips as her mask foretold. It was a shame that a global pandemic hit just a few short months later, making Asuka’s mist worrying for legit reasons! 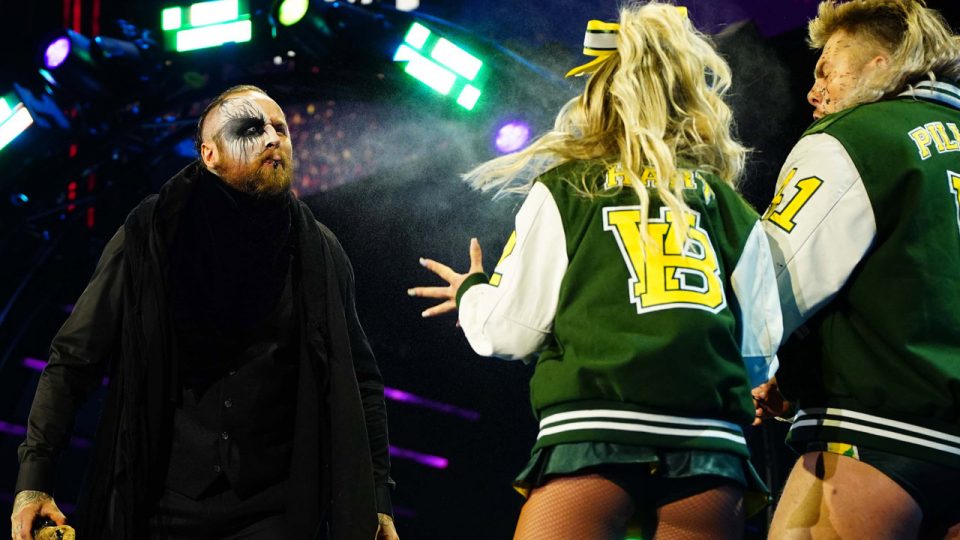 When making his way from WWE to AEW, The artist formally known as Alistair would retain some of his dark cult leader persona that he had been using ever since his Tommy End days.

That’s not to say he didn’t make some changes. During his second match in his trilogy with Cody Rhodes, Black would debut his mist, an ink black variation.

Black’s black mist has been billed as extremely dangerous, blinding Pac and forcing Julia Hart of the Varsity Blondes to wear an eye patch.

It is also alluded to have corruptive properties on the inside, as Julia teases her descent into the dark side which started once she adopted the pirate look. Julia now appears to be a full-on baddie and used her own form of mist at Double Or Nothing on Pac.

Of course, like all good “mystical” gimmicks, the spittle might not actually be a venom-like symbiote, but theatrics to amplify the “MAHND GAMES” of the House Of Black.