Some wrestlers will finish the match no matter how horrific their injury is.

At Hell In A Cell the whole wrestling world was shocked at the massive bruising on Cody Rhodes‘s right side due to a torn pectoral muscle.

What was even more shocking is the crazy son of a gun decided to face Seth Rollins in his scheduled fight at Hell In A Cell regardless.

Was this a good move on Cody’s part? Some see it as a sign of his endurance and love of the business, and the bout went on to earn Cody and Seth something rarer than a Blastoise 1st edition shadowless base set Pokémon card. Dave Meltzer awarded the match five stars – the first main roster WWE match to receive the rating in more than a decade.

Others think it was kind of misguided, an unnecessary showcase of masculinity, that could have caused Rhodes further damage and sets a silly precedent that should be left in the carny days of ‘wrasslin’.

At the end of the day, it was Cody’s idea to wrestle injured and you have to at least respect the American Nightmare for going far and beyond the call of duty to entertain the fans.

For the people on our list today, there may not have been a choice as these horrific injuries took place mid-match.

While we mere mortals may find it perfectly acceptable for the ref to throw up the ‘X’ sign for the grapplers well being, some toxic-minded fans, as well as the wrestlers themselves, may see it as a sign of weakness and so the performer will finish the damn match regardless.

You gotta protect the business! Even though everyone is in on it nowadays and has been for decades…

So here are some toughest who soldiered on to a finish, for better or for worse. 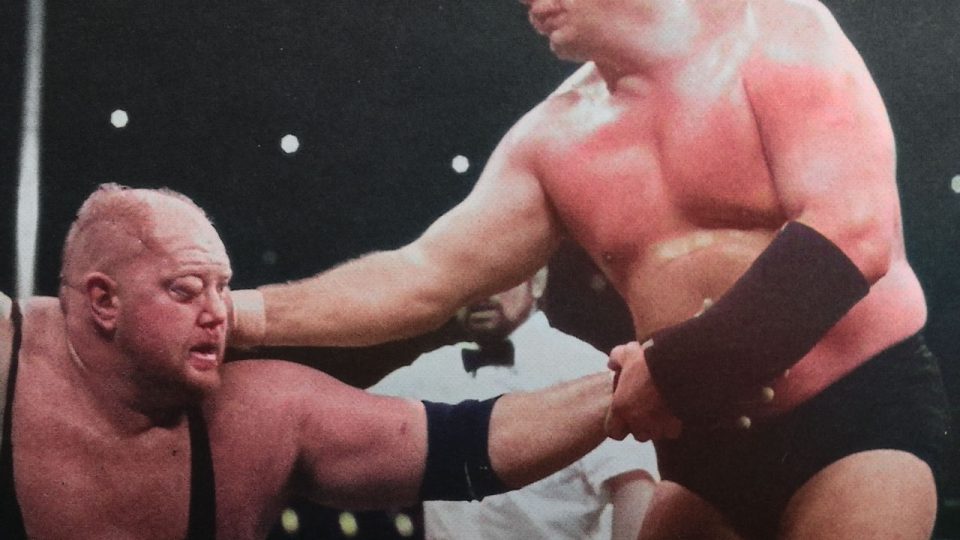 Remember that feud during the apocalypse when WWE went a bit mad without a crowd to boo them, and Seth Rollins had a weird fixation on wanting to rip out Rey Mysterio’s eye?

Well that kind of happened before, for reals, but obviously it wasn’t a planned spot.

Vader is no stranger to random body parts falling off people’s faces (more on that later) but in 1990 whilst in a match Stan Hansen, the big guy nearly lost one of his peepers.

With both competitors being notoriously stiff, especially at this point of their careers, the match was expected to be quite the rough affair.

According to Hansen, he didn’t know what happened until after the match as he took quite the beating himself, but according to Leon White, Hansen busted his nose even before the incident by walloping him with a cowbell.

Then, with a thumb to the eye, Hanson accidentally pushed Vader’s eyeball out of its socket.

Letting go of his opponent and standing up, Vader removed his mask and clearly pushed his eye back into place.

Here is a picture of Vader with only one eye, but we must warn you, it’s quite the horrific sight. 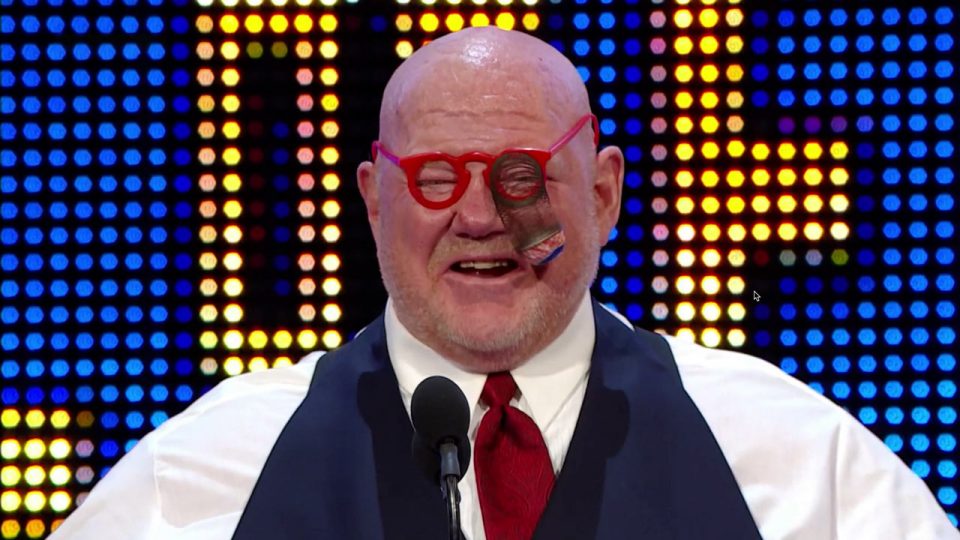 Big Van Vader only needed a couple of seconds to compose himself and continued the match like the absolute mad man he was. His nose had to be rebuilt, and he lost most of his vision in his right eye.

David Arquette Gets His Throat Slashed 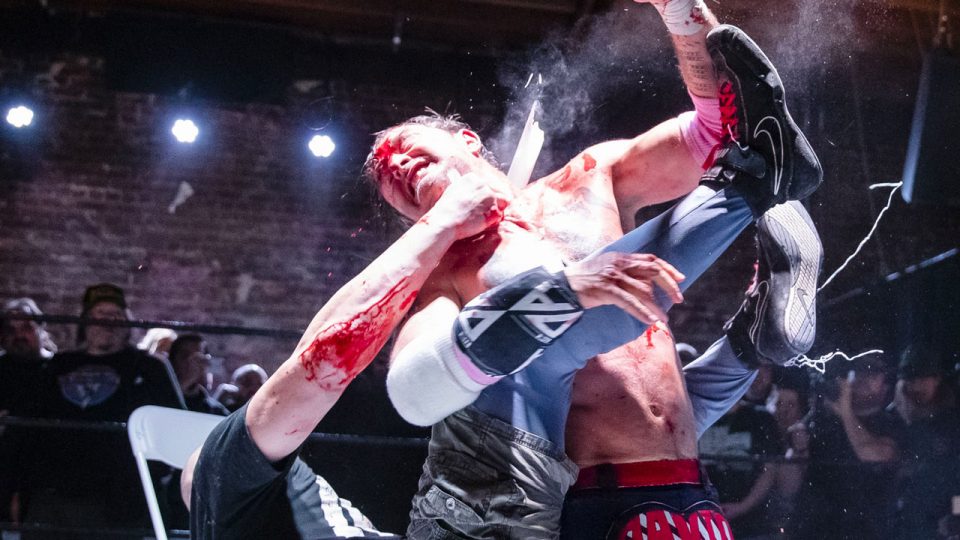 David Arquette winning the world title may have been a bit silly, but it wasn’t as bad as people kept making out.

At that point, the WCW championship was pretty much just a prop, and in the year 2000, before Arquette got his Hollywood fingers on it, it had already changed hands five times. Eight if you consider “Vacant” a champion. It was only April.

It was passed on another 12 times post-Arquette before the year was out. Point is, that the prestige of the championship would have dropped with or without the actor’s involvement, being more akin to the current 24/7 title than the company’s flagship belt.

His title reign lasted for only a fortnight too. Still, being a genuine fan, and being hated by wrestling fans as a result of the incident, a few years ago Arquette tried to pay his dues as an in-ring competitor and it almost cost him his life.

During a GCW match in 2018, Nick Gage accidentally stabbed Arquette in the throat with a light tube.

As documented in the film “You Can’t Kill David Arquette” the two may not have gone on to perform a five-star match after the incident, but you can see that David is clearly shaken and contemplates a couple of times about just leaving, and no sane person would blame him if he did.

The blood pumping from his neck was a scary sight to behold, so one can only imagine how scary it was to experience.

But, he got back into the ring and took the pinfall, Although some folk give him grief for not selling and running straight to the hospital the moment the match was complete, most level-headed wrestling fans can agree that the film actor paid more than his dues that night. 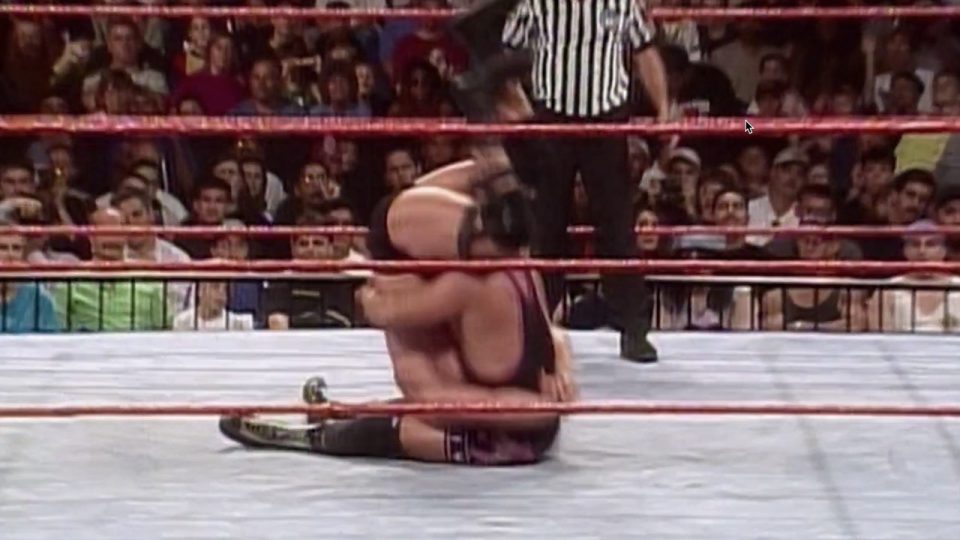 Masahiro Chono would suffer such an injury during a New Japan match with a young Steve Austin after a botched piledriver, and still went on to finish the job.

In a sick twist of fate, Austin would have the same thing happen to him in his match with Owen Hart in 1997. After suffering a terrifying moment of brief paralysis, Austin would take the victory with a roll-up.

The reason Austin makes the list is despite the break only allowing him to be a full-time ring competitor for less than five more years, not counting the almost full year between 1999 and 2000 he took off to get said neck surgically repaired, he still hadn’t reached the prime of his career.

Changing to a brawling style, in the short time he had left Austin went on to win the world championship multiple times and cemented his place as one of, if not the most popular wrestler of all time.

One can only imagine how different the wrestling landscape would look today had he not taken that bump to the head. 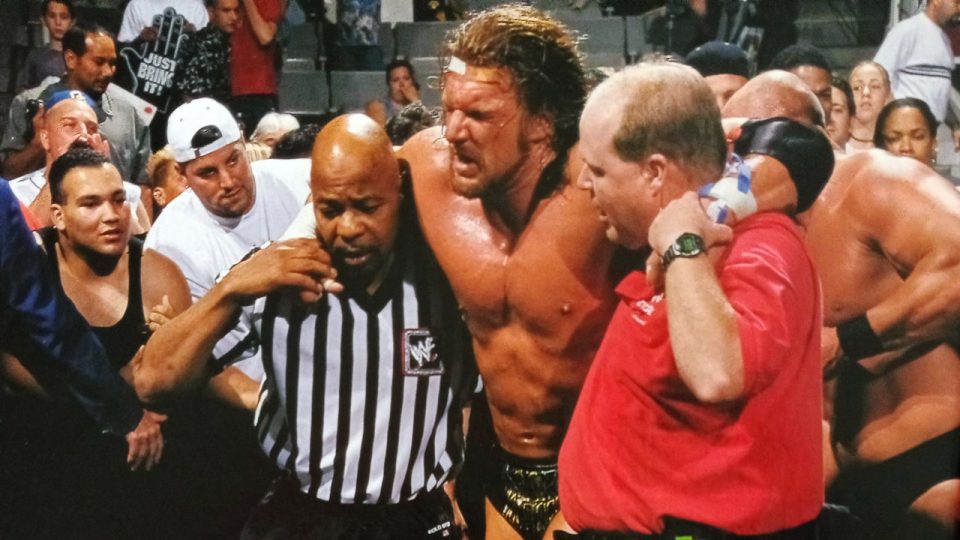 Triple H seems to be cursed when it comes to wrestling tag matches, and in some ways blessed, as he could rely on his partner to take the brunt of the workload.

That doesn’t make the times he carried on to the finish any less impressive though.

The most famous was during a tag match that some consider one of the best in Raw history.

Partnering with Steve Austin and taking on the team of Chris Jericho and Chris Benoit in May of 2001, Hunter would tear his left quad trying to break up a Walls Of Jericho attempt on Austin. He would finish the match, even taking a Walls Of Jericho himself, which must have been exultingly painful.

Both injuries would put The Game on the shelf for a long time, making it almost impossible for him to walk on the injured leg, yet still he somehow finished the matches.

Triple H’s last major injury took place at Crown Jewel in 2018. Once again partnering with Shawn who came out of retirement for the event, he faced The Undertaker and Kane in a match most fans would like to forget.

That doesn’t take away from the fact he tore his pectoral muscle and, once again, finished the damn match.

Say what you will about Triple H, his drive and tenacity are what made him one of the most powerful figures in professional wrestling, and these botched battles are a perfect example.

Mick Foley Hurts His Everything 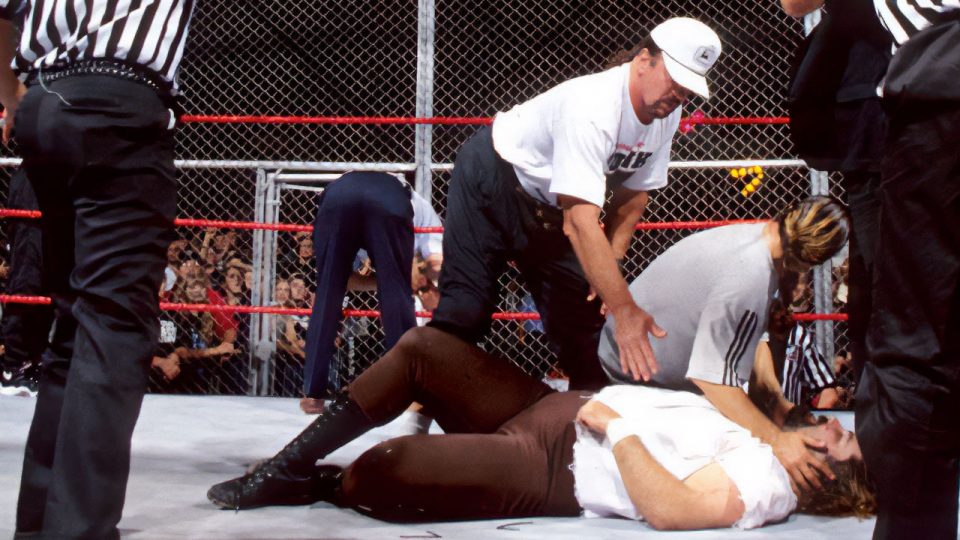 Mick Foley is renowned for taking a beating and carrying on. It was pretty much the underlying theme to all his gimmicks.

Be it Dude Love, Cactus Jack, or Mankind, at the end of the day what made him dangerous is that Mrs. Foley’s baby boy wouldn’t stay down no matter what you threw at him.

Even losing an ear in a match with Vader four years after Vader’s eye popped out couldn’t slow him down. A mad professor could probably follow those two about and Frankenstein together the ultimate badass from what remnants were left in the ring. 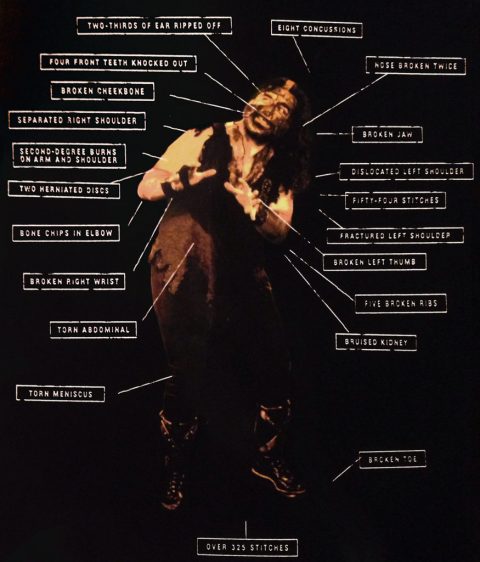 They say a scar tells a story, which is probably why on the back of Mick’s first, seminal book Have A Nice Day instead of a blurb it’s just a list of every injury Foley obtained in his career.

The ultimate example of the man’s tenacity undoubtedly, and unsurprisingly, has to be Hell In A Cell against Undertaker at King Of The Ring 98.

We all know visually what Foley did to entertain the fans that night, as clips are quite rightfully replayed throughout the years. It was a pro wrestling moment that will never happen again.

But internally what Mick suffered that night would be enough for any normal folk to quit the business for good!

A dislocated jaw, dislocated shoulder, internal bleeding, bruised ribs, concussion, and several teeth knocked out, including one that punctured through his lip. 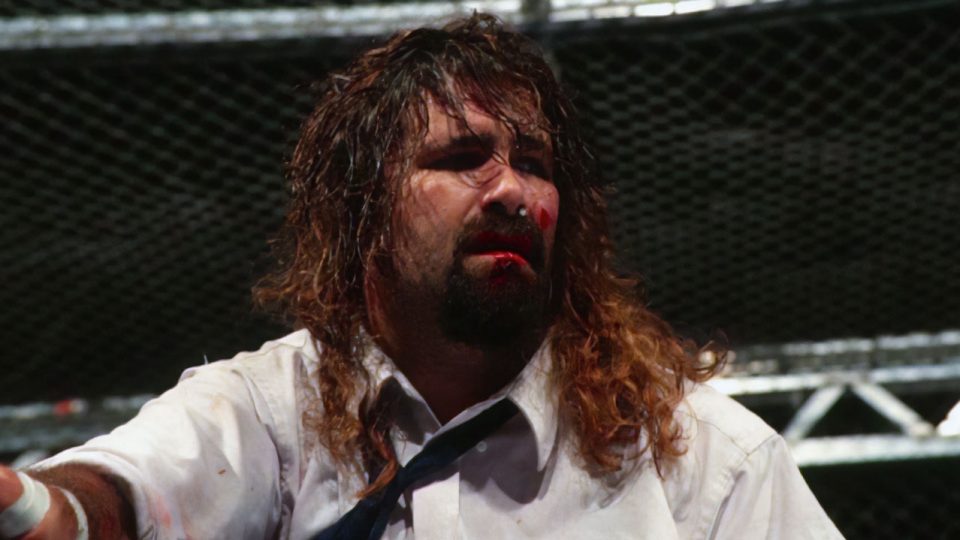 Not only did the crazy SOB finish the match – after taking a chokeslam into thumbtacks no less – but appeared again later on in the night to do a run-in during the main event!

The sacrifices he made that evening were unbelievable, and it’s a testament to endurance that he managed to continue his full-time career for another two years after the event before (kind of) ending it on his terms.

This is why to many, according to crowd signs, Foley Is God. The fact he survived all that he’s been through is miraculous, to say the least.