The Royal Rumble was originally conceived as a television special which aired opposite the NWA’s Bunkhouse Stampede pay-per-view event.

The special drew an enormous 8.2 rating on the USA Network which convinced the WWF to run the event as a pay-per-view offering the following year.

The ‘Rumble match itself was devised by Pat Patterson and was a change to the format of a traditional Battle Royal, with only two competitors starting and subsequent participants entering every 90 seconds.

Three decades after it’s formation, the Royal Rumble event is one of the most highly anticipated events on WWE’s pay-per-view calendar. However, only three men have ever won the Royal Rumble match in consecutive years. This feature lists each one. 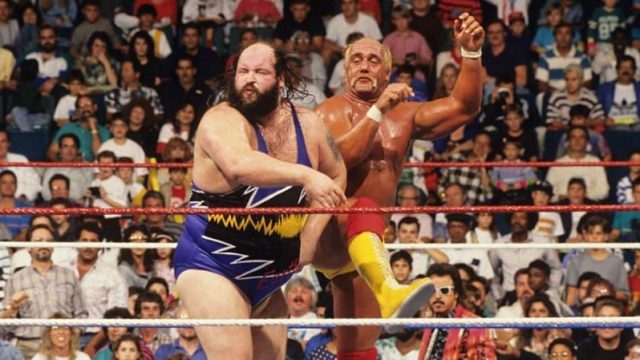 Hulk Hogan was the reigning WWF World Champion in January 1990. However, the company’s biggest star had never won the Royal Rumble match. That was rectified when ‘The Hulkster’ last eliminated Mr Perfect to win the bout.

Interestingly, Mr Perfect had been originally booked to win the contest, but Hogan convinced WWF Chairman, Vince McMahon to change the result.

The following year, Hogan took the title again in a woeful ‘Rumble bout, badly deprived of the star power, which had made previous ‘Rumble matches so much fun.

‘The Hulkster’ would compete in one more ‘Rumble in 1992 but was eliminated by Sid Justice, which set up their WrestleMania VIII main event.

Shawn Michaels was a multi-time Intercontinental Champion when he entered the 1995 Royal Rumble as the number one entrant.

He, along with The British Bulldog, Owen Hart and Lex Luger, were the only conceivable winners. However, few expected Michaels to outlast all 29 other participants to win the bout.

After seemingly being ejected from the bout by Bulldog, ‘The Heartbreak Kid’ held onto the top rope and only one of his feet touched the floor. That led to HBK knocking a celebrating Bulldog over the top rope.

Despite his famous win, Michaels was unsuccessful in his quest to wrest the WWF Championship from around the waist of champion, Diesel at WrestleMania XI.

The following year, ‘The Showstopper’ repeated the feat and won his second consecutive Royal Rumble match. On this occasion, he did win the big one at WrestleMania XII. Michaels defeated Bret ‘Hitman’ Hart in overtime of their 60-minute Iron Man collision to capture the gold.

Stone Cold Steve Austin is the only man in WWE history to have won three Royal Rumble matches. His first two wins came in consecutive years.

In 1997, Stone Cold entered the bout as entrant number five. He lasted over 45 minutes and eliminated 10 participants en route to victory. His first ‘Rumble win was tainted however, as ‘The Rattlesnake’ was actually ejected by Bret Hart, but the elimination was missed by officials. That allowed the devious Stone Cold to sneak back in and eliminate the remaining participants to win the match.

Due to the controversial nature of his win, Stone Cold was stripped of the WrestleMania title shot, which was put up for grabs in a four-way match at February’s In Your House event. However, prior to the match, Shawn Michaels vacated the WWF Championship, which made the four-way bout a title match instead. Bret Hart won the contest and the WWF Title.

Stone Cold’s ‘Rumble victory in 1998 had no controversy attached to it whatsoever. ‘The Rattlesnake’ dominated the field and eliminated seven competitors to win the match and earn a crack at the WWF Championship at WrestleMania XIV. On this occasion, Stone Cold won the bout and the WWF Title to kick start the ‘Attitude Era’ and the most successful period in WWE history.

You can watch every Royal Rumble match exclusively on the WWE Network.