The WCW Championship originated in 1991. The company’s premier title was active for a decade until it was unified with the WWF Championship post-buyout at WWF Vengeance on December 9, 2001.

For long time wrestling fans, it will come as no surprise that all of WCW’s shortest World Championship reigns occurred, after the once great promotion had entered terminal decline.

Four wrestlers reigned as WCW World Champion for less than a day. This feature breaks down each brief title run.

Diamond Dallas Page had finally claimed the WCW World Title at Spring Stampede on April 11, 1999. However, his inaugural run with the gold lasted just 15 days as he dropped the belt to Sting in an electric encounter on the April 26, 1999 Nitro.

That victory marked Sting’s fifth WCW World Championship win. It was to be a brief one. That is regrettable as the title bout was one of the finest matches of either man’s career and is little more than a footnote.

Later on the same show, Sting defended the gold in a much less memorable four-way with former champion, DDP, Goldberg and Kevin Nash.

DDP pinned Nash to reclaim the belt. Defending champion, Sting was not even involved in the decision. 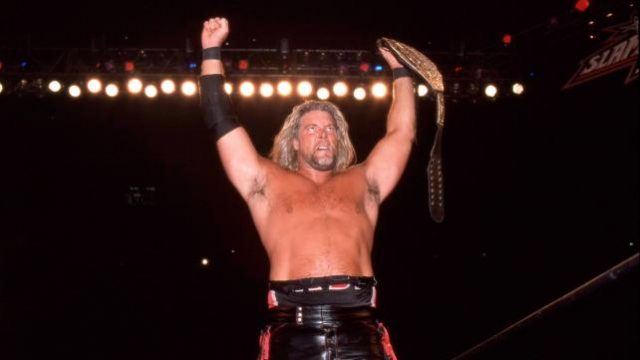 Kevin Nash won five WCW World Titles. All but his second lasted less than 20 days. However, none were shorter than his third which didn’t even last one.

There is a story to this:

At Souled Out, held on January 16, 2000, career mid-carder, Chris Benoit finally broke through the glass ceiling and captured his only WCW Championship.

However, he left the company the following day to take up a job offer from the WWF. Fellow mid-level players, Eddie Guerrero, Perry Saturn and Dean Malenko followed him out of the door.

That led to the belt being vacated and put up in a match pitting Sid Vicious, who had been defeated by Benoit at Souled Out, versus WCW Commissioner, Kevin Nash. That bout took place on the January 24, 2000 Nitro. Vicious had to earn the match with Nash by beating The Harris Brothers in a Handicap Match.

On Thunder, two days later, Vicious was stripped of the belt due to pinning the “wrong” Harris brother to earn the title match with Nash. ‘Big Sexy’ then declared himself the new champion.

Nash defended the strap later on the same show in a Triangle Cage Match versus Vicious and Ron Harris. Nash dropped the title back to Vicious, meaning his title reign only lasted an hour or so. That rendered this convoluted game of pass the WCW Championship, utterly pointless. 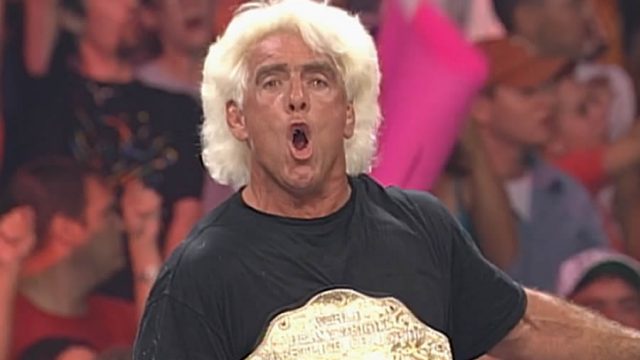 Ric Flair won a recognised 16 World Titles. Six of them were WCW Championship reigns. One of them was instantly forgettable, as it began and ended on the same day.

On the May 29, 2000 Nitro, WCW World Champion, Kevin Nash (yes, him again) handed Flair the WCW World Title and declared him the new champion.

That was the second WCW Championship, Nash had given up for another wrestler after the famous January 4, 1999 Nitro Fingerpoke of Doom episode. Many observers point to that event as the death knell of WCW. Those people must not have watched WCW in the year 2000.

‘The Nature Boy’ was forced to defend the gold in the main event of the programme versus Jeff Jarrett.

Flair, however was distracted during the bout by his ‘kidnapped’ family at ringside. Welcome to Vince Russo’s booking. Russo himself replaced the actual guest referee for the match, David Flair to count the pin and screw Flair out of the title.

That was the story of ‘The Nature Boy’s’ 16th and final World Title reign. A very disappointing footnote to an illustrious World Title legacy.

Chris Jericho was the final WCW World Champion. When he claimed the title from The Rock at Vengeance on December 9, 2001, the belt had been rebranded as the ‘World’ Title.

By virtue of becoming ‘Undisputed’ Champion, Jericho unified the former WCW Championship with the WWF Championship. In doing so, the ‘World’ Title was retired and Jericho’s second WCW Championship reign ended around 15 minutes after it began.

You can watch all of these WCW World Title changes exclusively on the WWE Network.