The Undertaker may be the king of reinvention, but that doesn’t mean he has taken a couple of missteps in his time.

This year The Undertaker is being put into the WWE Hall Of Fame, and quite rightfully so. On top of that, the big boss himself, Mr. McMahon, is inducting the Dead Man.

The fact that the only other superstar to receive such an honour is Stone Cold Steve Austin is a testament to how legendary Taker’s career has been.

For 30 years Undertaker has been on top, and the key to such great success and longevity is surely his ability to reinvent the character in both attitude and looks.

Everyone has a favourite Taker. Be it the zombified mortician, dark avenger, cult leader wizard, badass biker, last outlaw, or another of his many personas, Undertaker has so many looks it would leave even the most avid toy collector bankrupt.

However, when you experiment with your look as much as him, you’re bound to make a few fashion faux pas now and again. Heck, even Bowie and Madonna had their Thin White Duke and Hard Candy phases.

So today we are taking a look at looks that even the most die-hard children of the night would probably like to forget. 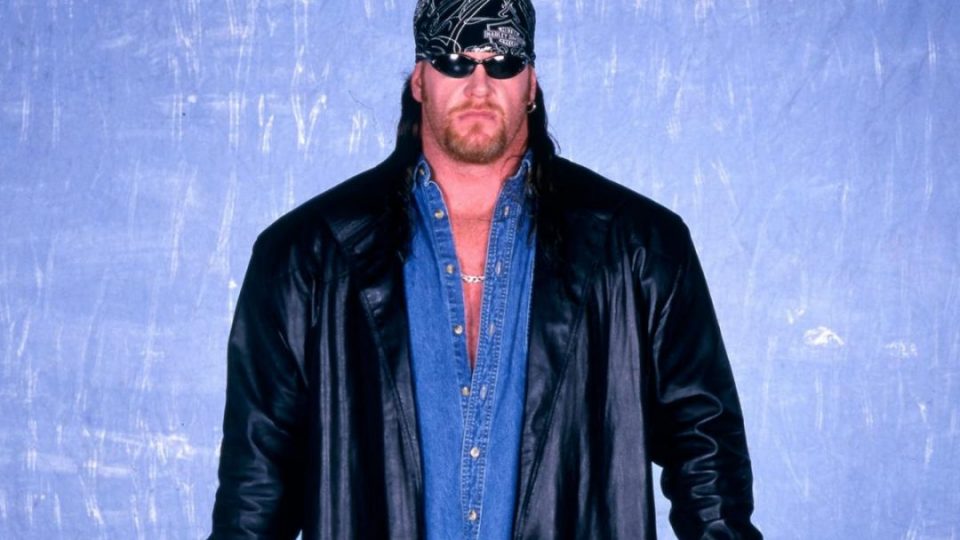 When The Undertaker returned in 2001 after a long hiatus, he debuted his American Badass gimmick to mixed responses.

For some, it was another fresh start, and fit in with the era of attitude that was currently in vogue with the WWE. For others, it was a shame to see the otherworldly character become just another WWE superstar.

Whatever your stance is on The American Badass, it must have been nice for Calaway to relax and be himself instead of constantly embracing the darkness.

Maybe too relaxed. When Undertaker wore black denim and leathers he still invoked part of the imagery of the Deadman, but the bright blue denim did not.

It was quite jarring seeing him in such a lightly coloured top. On top of that, the strange cut of the sleeveless shirt gave the impression of two lengths of blue paper kitchen towels being lovingly adorned upon each shoulder.

This Undertaker was a far cry from what we had come to expect, and closer to weird Uncle Colin blaring out Mustang Sally drunkenly on the karaoke at the family do. 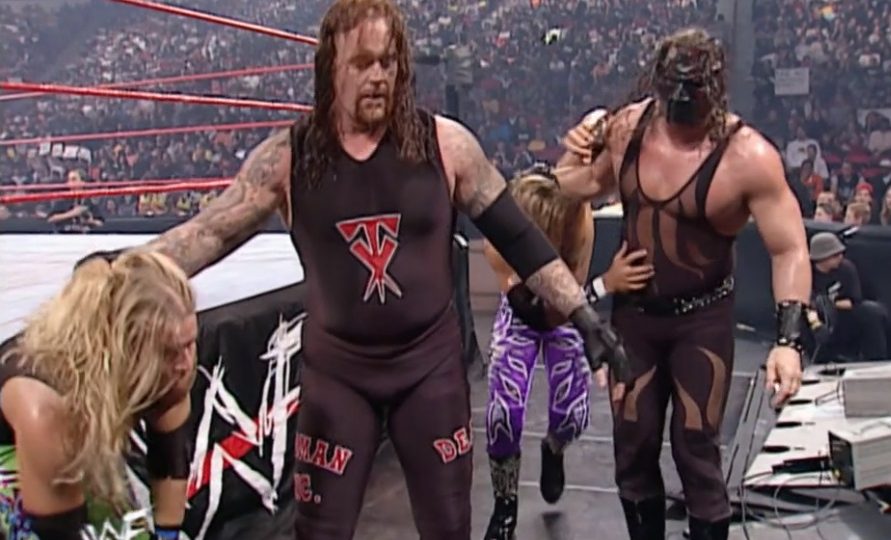 Undertaker is no stranger to the singlet. He wore one during the ministry of darkness era, and multiple times when he was super jacked during the mid-2000s and beyond, and they have always looked great on the big fella.

Well, almost always. At No Way Out 2001, The Brothers Of Destruction were set to face Edge & Christian and The Dudleys in a triple threat table match.

Taking a break from his usual American Baddass/Deadman inc look of biker street gear, the man in black (or sometimes blue denim) decided to bust out a good old-fashioned wrestling singlet.

For some reason, it looked utterly bizarre. Maybe it was the bright red goth taker crucifix logo adorned across his chest like a superhero, or the poor cut of the cloth unflattering Taker’s normally buff physique.

Whatever it was, Kane was not to be outdone in strange attire weirdness. He got rid of all the red in his singlet, despite Undertaker adding red to his own, so tag team uniform was not an excuse for the diabolical duo’s peculiar look.

The lack of “fire” on Kane’s gear made his sheer flame cutouts look more like sexy petals.

Speaking of fire, Undertaker and Kane presumably burned their costumes after this match as they were never seen again. 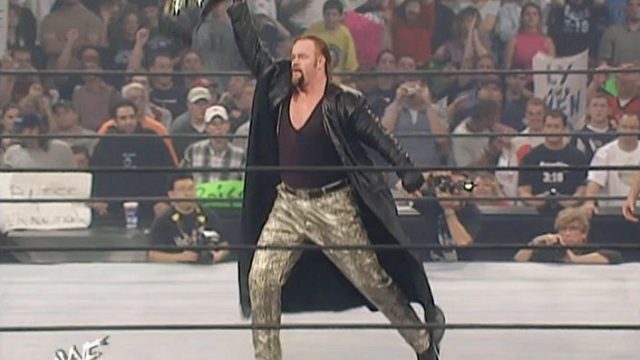 In 1999, The Undertaker and The Big Show formed an unholy alliance, a devastating tag team that would rock the WWF roster.

Once, to test The Big Shows toughness, Taker went on a bike ride (motor style, not a tandem peddle, but that would have been amazing) with the big fella into the middle of the desert.

What he didn’t tell Show was that he only half-filled his tank with petrol! In a true d*ck move, he left the lumbering lummox stranded and drove back to civilization, no doubt for drinks and board games with Paul Bearer back at the hotel.

No cameras were around to catch these mad scenes, so we can only take Undertaker’s word for it.

So before his match with Kurt Angle at Survivor Series 2000, Taker must have taken a similar sabbatical, as he emerged wearing snakeskin trousers!

This, of course, is the famous match where Kurt would crawl under the ring and switch-a-roo with his brother Eric, but with a distraction as loud as Taker’s lower attire he needn’t have bothered.

He could have probably just done a straight switch at ringside and no one would have noticed.

There is a rumour that Undertaker didn’t have his luggage and had to borrow some pants off of his BSK buddy The Godfather. 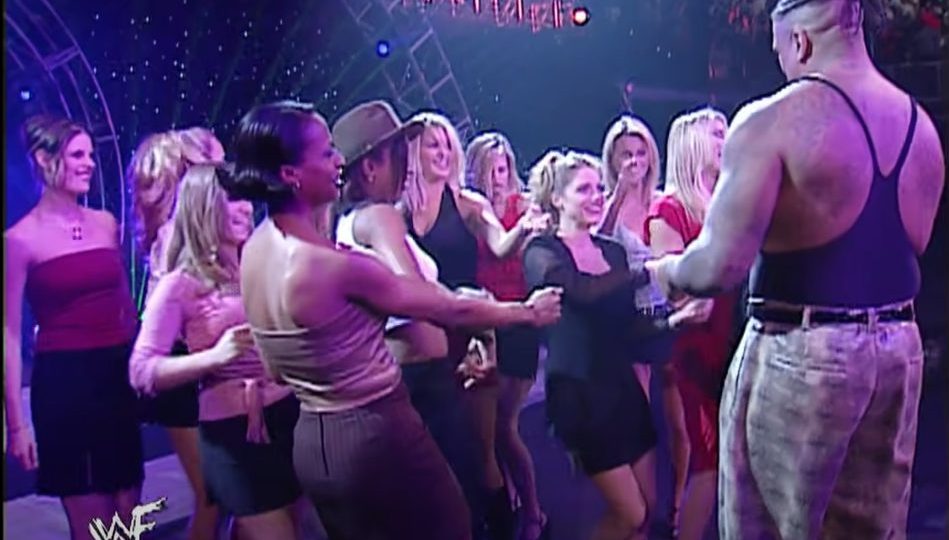 However, Godfather has since debunked this rumour.

This wouldn’t be the first time for the lost luggage rumour, although previous events for the excuse seem a lot more dubious… 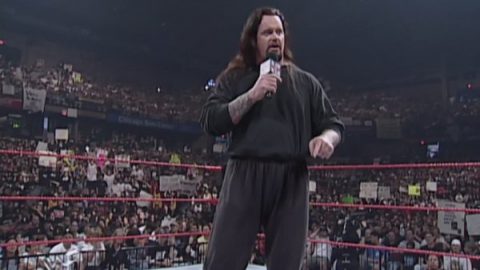 In June of 1998, The Undertaker made his way down to the ring. There were no theatrics, no outlandish costumes, just The Deadman, a mic, and the airing of his grievances in a worked shoot promo.

If this was the first time Taker ever broke character then why isn’t it a more celebrated moment?

Well first of all, for a shoot, the promo plays it pretty safe. The edgiest it gets is Undertaker saying he “never lost his smile” while working for Vince McMahon.

There are no harsh truths or uncomfortably close to reality moments unlike the CM Punk pipe bomb, and Taker is still deep in kayfabe when he talks about his “brother” Kane and how he deserves a title shot.

The most noteworthy part of the speech is probably what Undertaker is wearing. A comfortable black sweatshirt and jogging bottoms.

It was quite jarring to see the lord of darkness appear not only in normal human clothes but one step up from pyjamas.

In the promo, The Phenom talks about slaying dragons, but sadly in that attire the only dragons he looks like he will be slaying are during an all-day Final Fantasy VII marathon curled up cosy on his sofa from the comfort of his living room.

There is yet again a rumour that Undertaker didn’t have his luggage. But if that was the case, why did he appear in the same guise the following Raw in a different arena? 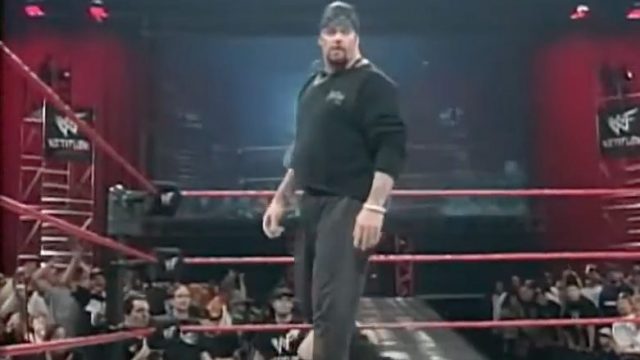 Unless of course he just thought he would own it, and see how far he could get being as comfortable as possible. Which wasn’t very far.

A few short weeks Undertaker would face Mankind at King Of The Ring 98. True history was made that night, and the comfytaker was thankfully left in the past.

Well, he did wear his sweater again for his run-in later that night during the Austin/Kane match, but after what he had just been through I think we can forgive the Deadman for wearing his duds, man. 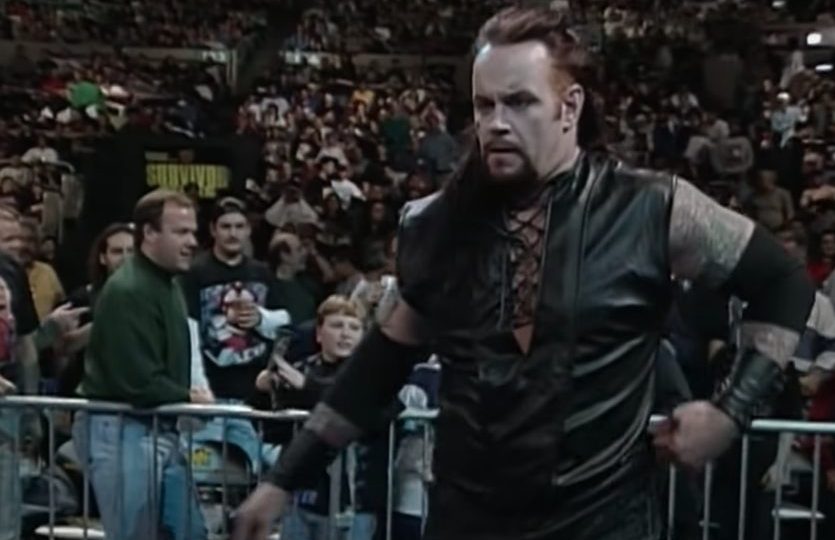 The Survivor Series 1996 will go down in history as one the most important events in WWE history, as it was an evening where evolution truly took place.

Stone Cold Steve Austin continued his rise to stardom, The Rock made his in-ring debut, and The Undertaker had a significant image change for his latest match with Mankind.

During his entrance, The Undertaker ascended from the ceiling on giant bat wings in a moment that sadly sounds far cooler written than it did in reality.

Taker didn’t look very comfortable as he dangled down, and after he was untethered from his safety harness the world got a good look at his new guise.

Like a 1968 comeback special Elvis, Undertaker was dressed from head to toe in black leather.

It wouldn’t have looked so bad if it wasn’t for the addition of lace-up cords adorned to the v cut at the front, making Taker look like he had arrived from the cover of a romantic swashbuckling novel rather than the gates of hell.

The strands of fabric that crossed through the black leather and across Undertakers pectoral, ahem, cleavage looks like a top your weird drunk Aunt Carol would wear as she claps on weird drunk Uncle Colin as he sings Mustang Sally on karaoke at the family do.

Luckily this was just a stepping stone to The Undertaker’s full-on Lord Of Darkness gear, one of the more beloved looks among his fans. Thank Christ.