You could quite feasibly write a book on the outstanding legacy of matches contested by Rey Mysterio in WWE.

‘The Biggest Little Man’ is up there with WWE’s all-time greats. His unique blend of the modern high-flying style with the more traditional lucha libre high-flying makes all of his matches stand out, often making it difficult to dissect the best of the best. WWE themselves failed to achieve this justifiably with his WWE 2K22 Showcase Mode, omitting key matches and milestones in favour of random Raw outings.

Note, the following five matches are all underrated as far as Rey Mysterio’s career is concerned in WWE. Any encounters held in WCW, Lucha Underground, or elsewhere won’t be included, no matter how outstanding the masked Superstar may have performed. Additionally, singles matches will take preference over multi-man matches, although Mysterio is a proven God’s gift in such encounters.

Criteria aside, what stands up as Rey Mysterio’s most underrated WWE bouts? 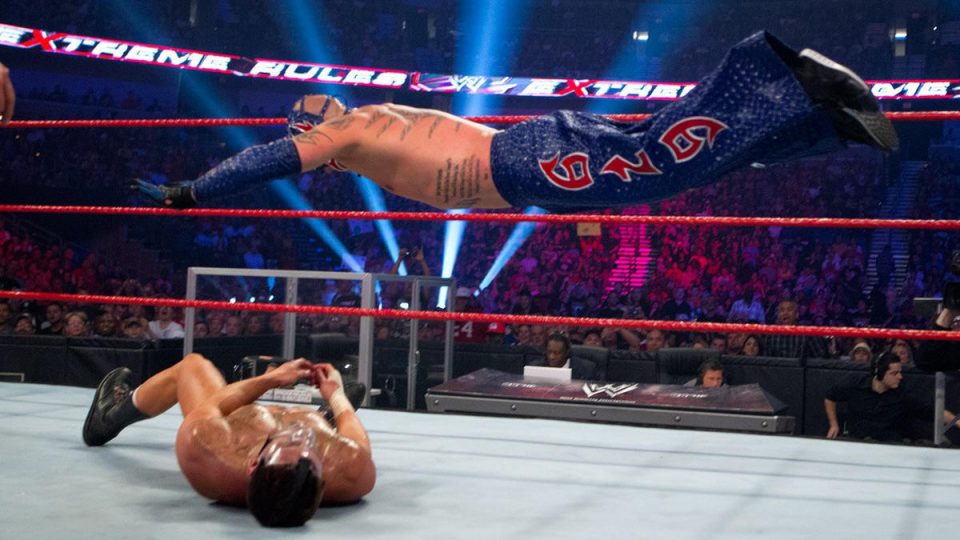 Although the masked marvel traditionally works best when stood opposite fellow aerial artists, such as Eddie Guerrero, Rey Mysterio’s 2011 rivalry with Cody Rhodes – whose only experience of gliding through the air is the occasional Moonsault – was sublime. Originating when Rhodes’ nose was broken from an exposed knee brace-assisted 619, the pair contested a handful of matches, culminating with a chaotic Falls Count Anywhere match at Extreme Rules.

There was little-to-no weapon usage, but the match did take full advantage of the stipulation’s literal meaning, taking the encounter everywhere. Through the crowd, around ringside, up the stage, anywhere they could think of – and it was outstanding. Each area of Tampa’s St. Pete Times Forum had something to offer, including an excellently executed Disaster Kick from the future ‘American Nightmare’ while in the concourse.

The two-time World Heavyweight Champion got his win back after losing to Rhodes at WrestleMania XXVII, pinning him with a traditional 619/Splash combination after spraying green mist in his eyes. Why, exactly, this happened is anyone’s guess – however, it did add to the match in the sense that Rey had to dig deep, just as Cody had done at ‘Mania by whacking him with his knee brace. 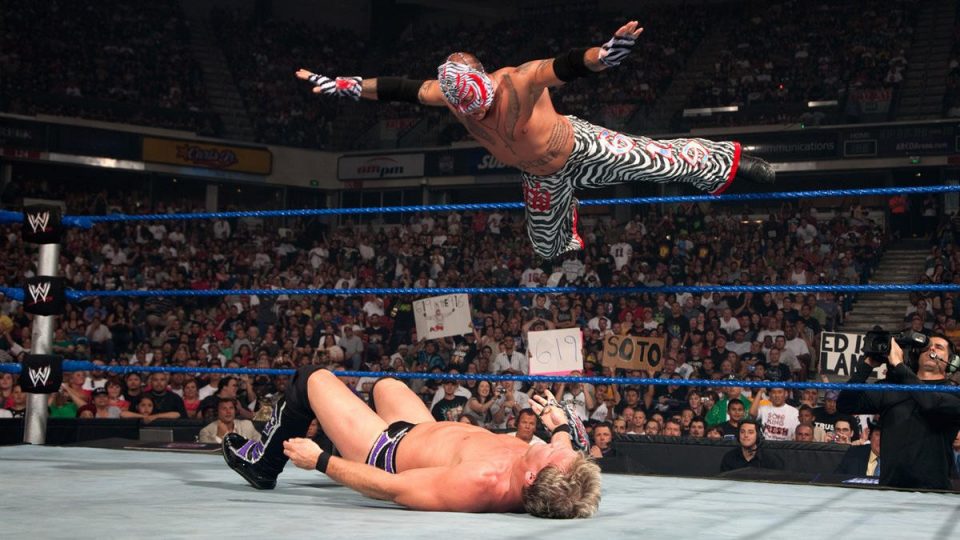 It should come as no surprise, really, that Rey Mysterio and Chris Jericho work superbly well together. They proved this fact when, in 2009, they wrestled a series of show-stealing encounters over the Intercontinental Championship. Although their bouts from both the Extreme Rules and Judgement Day pay-per-views lived up to expectations, it was their feud-ender from The Bash that stands out.

Contested as a Mask vs. Title match, following Jericho unmasking Rey at Extreme Rules, the match saw the future ‘Le Champion’ take on more of a hard-hitting style, rather than his standard technician stance. This allowed Jericho to be the best version of himself he could be against Rey Mysterio in a match full of immaculately-performed spots and callbacks to earlier portions of their story.

A Codebreaker counter to Mysterio’s springboard was the unrivalled highlight. It wasn’t his night though, as following a 619 and Springboard Splash, Rey Mysterio regained the championship. This came after a sublime callback to their Extreme Rules contest, which saw Chris Jericho unmask Rey in order to roll him up; here, the former WCW cruiserweight was wearing two masks in case of a repeated situation.

A small, yet divine moment from two of the best to ever do it. 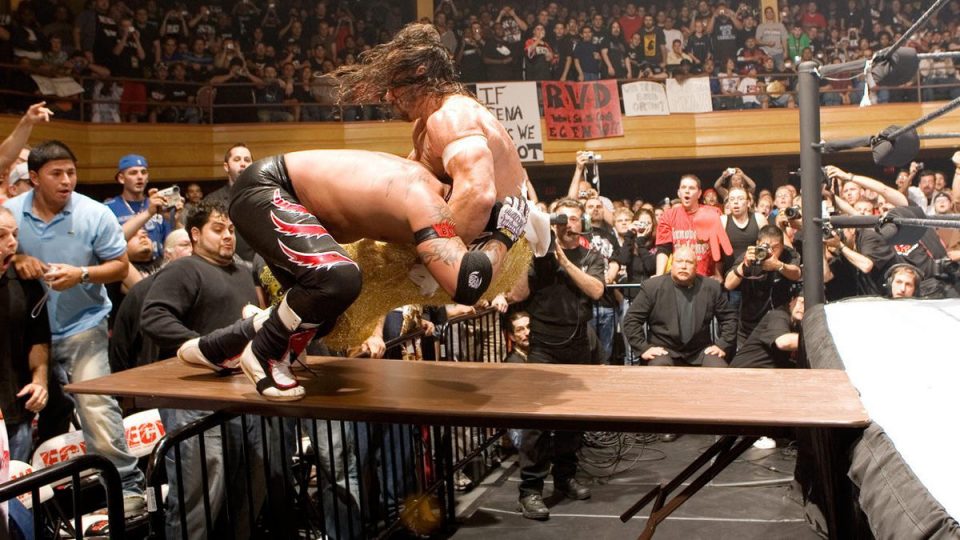 Result: Rey Mysterio vs. Sabu was declared a No Contest in around 9 minutes after WWE’s doctor declared that neither man could continue. Rey Mysterio retained the World Heavyweight Championship.

It says a lot about the standard of Rey Mysterio’s in-ring abilities that, despite wrestling just nine matches for Extreme Championship Wrestling, at least half of them are must-see encounters. His 2 Out Of 3 Falls match with Juventud Guerrera from Big Ass Extreme Bash, in particular, would have made the cut here if this wasn’t strictly WWE-related.

At ECW One Night Stand 2006, ‘The Master of the 619’ returned to his ECW days, albeit under the WWE banner, when he made a defence of the World Heavyweight Championship against Sabu. The match was unquestionably one of the best from across the two One Night Stand cards, finding the right balance of high spots and technically-sound pro wrestling to ensure every minute wasn’t just Mysterio being smacked with chairs.

The closing spot was both objectively and subjectively outstanding. Both men were so knackered, despite wrestling for only nine minutes, that a triple-jump DDT courtesy of Sabu – an otherwise simple spot in any Sabu match – left both champion and challenger laid out atop the broken remains of a table at ringside as the doctor threw the match out. It was the perfect ending to a match that neither man should have lost; a rare oddity of the WWE-ECW brand. 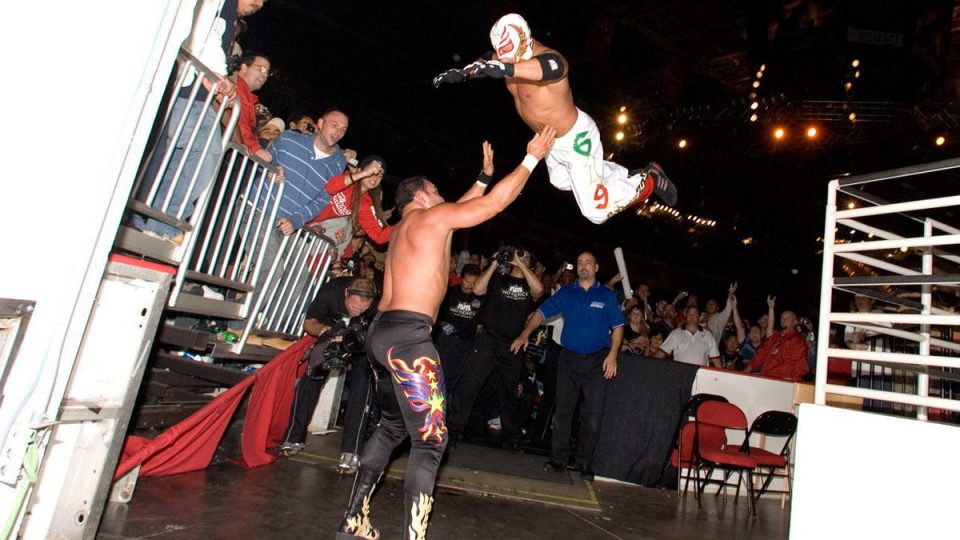 Result: Rey Mysterio pinned Chavo Guerrero in just over 12 minutes after diving off the crowd railings with a Crossbody.

Rey Mysterio seemingly has a penchant for Falls Count Anywhere matches, with this being the second example of the stipulation on this feature. This time against former ally Chavo Guerrero from the 2006 No Mercy, the story was impeccable; Guerrero had turned on Rey, costing him the World Heavyweight Championship at The Great American Bash, and accusing him of “leeching” off his family name. It was intense – the match followed suit.

Barely lasting a few minutes before both Rey and Chavo knocked each other from the turnbuckles, the bout followed a similar path to the former’s future outing with Cody Rhodes in that the match went all over the RBC Center. A unique spot saw Mysterio swing from the stage’s steel structure, Frankensteinering ‘The Mexican Warrior’ in a seamless transition; Guerrero later counteracted that with a vicious Gory Bomb, dropping Mysterio across the barricade in a nasty incident.

This hard-hitting anarchic style remained throughout the match. An impressive 619, which saw that year’s Royal Rumble winner remarkably swing around the railings in the crowd, was followed by a dive off of said railings to hand Mysterio the win.

In hindsight, the dive looked a tad on the weak side and the 619 should have concluded the match but regardless, the bout was a stark reminder of how important Rey Mysterio was to the trajectory of WWE in 2006. Chavo Guerrero too, for that matter; he was no Eddie, but the recency of the WWE Hall of Famer’s passing made everything they did that year all the more important. 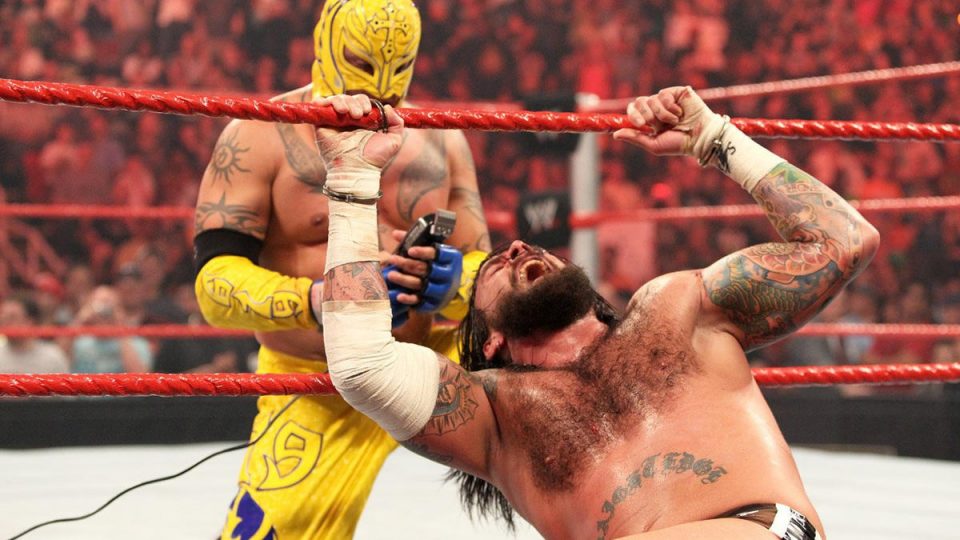 It would be impossible to limit this to just five entries; that’s simply the standard of Rey Mysterio’s career over the last 20 years and indeed beyond that.

Mysterio’s outing with Chris Jericho from Extreme Rules marked the next step of their rivalry in an excellent encounter, while his Vengeance 2003 clash alongside Billy Kidman against Team Angle is an often forgotten tag team affair. A couple of matches vs. Eddie Guerrero from the 2005 Great American Bash and a March 2004 SmackDown episode continued their tradition of having insane chemistry together.

His Royal Rumble 2008 match with Edge was an unjustified omission from Mysterio’s WWE 2K22 Showcase Mode, as was his Eye For An Eye match with Seth Rollins from Extreme Rules 2020, despite its ridiculous stipulation. Rey’s 2019 Survivor Series clash with Brock Lesnar was a marvellous example of the former WWE Champion’s abilities against a beast, as he was tossed around the ring by Lesnar.

Rey Mysterio enjoyed a blissful WrestleMania XXVII match with Cody Rhodes, though not quite up to scratch compared to his aforementioned Falls Count Anywhere match. An Over The Limit encounter with CM Punk stood out among the rotten period that was 2010 WWE, while a hidden gem with Evan Bourne saw the pair tear it down on Raw in 2008. Lastly, Mysterio’s WrestleMania debut in 2003 vs. Matt Hardy was a shining example of WWE’s cruiserweight division at the time. 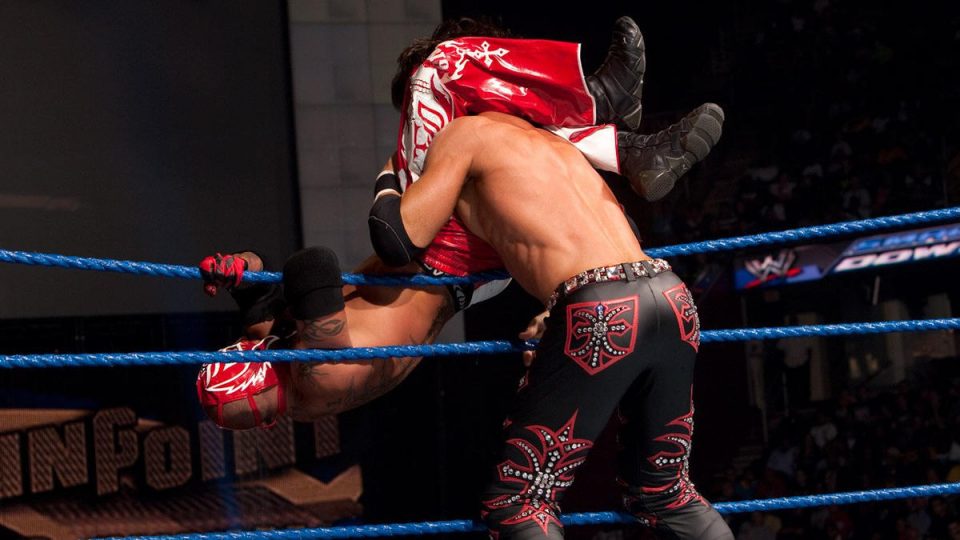 Although John Morrison was featured on WWE 2K22’s roster, he wasn’t signed to the company anymore. If he was, ‘The Shaman of Sexy’s’ encounter with Rey Mysterio from SmackDown’s 4 September 2009 broadcast absolutely would have been featured in Rey’s Showcase Mode.

Even before the two locked up, the atmosphere was set when they shook hands, laying the foundations for an indie-style match before the 2010s boom of the independent circuit. An exquisite back-and-forth sequence carried the early match, later accompanied by an array of flips that was nothing like WWE had seen at that point. Morrison and Mysterio were both ahead of the game in this era to the extent that this match wouldn’t look out of place on a late-2000s PWG card.

The match acted almost as a coming-out party for the now-Johnny Elite. An agile performer who’d always delivered, he’d rarely been provided with the chance to do so against such a high-calibre opponent in Rey Mysterio. That’s why, when he was in control of the match, hitting all of his signature offence on his way to becoming a three-time Intercontinental Champion, the crowd was glued to him.

When he connected with Starship Pain, pinning the eventual WWE Hall of Fame inductee for his latest title win, the reaction was not only huge, but well-deserved. Rey Mysterio helped solidify a WWE career that night.