Happy Halloween! It is the one day of the year when we all dress up in our spookiest outfits, carve out a jack-o-lantern, go trick-or-treating and eat loads of sweets. And wrestlers are no different.

Over the years wrestlers have worn some of the best outfits to celebrate the spooktacular occasion.

So to get in the swing of things we scoured the internet to check out the best get-ups this Halloween.

13. Brie Bella is the Nightmare Before Christmas

Brie Bella and her daughter Birdie became the Nightmare Before Christmas in this adorable photo.

Brie donned the cool and creepy aesthetic of Jack Skellington with her daughter dressed as a pumpkin.

The photo encapsulates everything Halloween is all about as families get together to have fun, dress up and look as scary as possible.

Wrestling’s power couple Adam Cole and Britt Baker went all out (pun fully intended) with their Halloween get up this year.

The AEW duo dropped their usual cool looks and personas to don some scary attire as two members of the living dead.

The member of SuperKliq and the AEW Women’s World Champion, dressed up as some really convincing zombies as they prepared for the scariest event of the year.

As the saying goes, couples who slay together, stay together.

Complete with Good Guy dungarees, rainbow t-shirt and orange hair she looked at every part of the possessed puppet.

Cross’ slightly manic persona (before becoming almost a superhero that is) is perfect for the Chucky character and combined with the awesome costume she made for one excellent addition to the list. 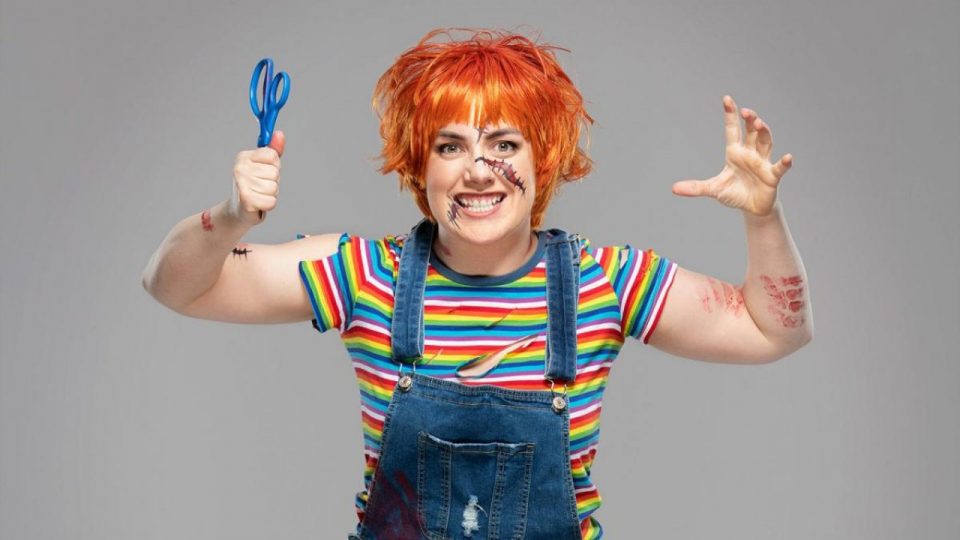 At last years NXT spooky-themed event Halloween Havoc there was no one better to host that horror movie aficionado, Shotzi Blackheart.

Blackheart took to the role of hostess with the mostess for the spooktacular show by donning an array of horror and Halloween inspired outfits.

Throughout the show, she dressed as Elvera, the Devil and the shockingly good Frankenstein’s Monster.

Blackheart’s Instagram is chock full of her in all sorts of wonderful costumes, from Freddy Kruger to a pumpkin and a killer clown to a final girl.

The engaged couple went in 100% with their comic book-inspired costumes looking every bit the power couple they are both in and out of the ring.

Flair dressed Harlequin, while Andrade donned the Jaoquin Pheaonix’s version of the Joker rather than Jered Leto’s punk-themed madman.

Because everything she does comes from within; from some dark impulse. I guess that’s what makes her so thrilling to watch. So dangerous. Even perfect at times, but also so damn destructive. 🃏 @AndradeCienWWE 📸: @richfreedaphotopic.twitter.com/6FMmCMbjVg

8. Anna Jay and Tay Conti are to die for

AEW’s most lovable friendship went beyond the grave judging by these gruesomely great images.

The members of the Dark Order took to their dark side when dressing up for this year’s spooky season. Both performers broke their usual glamorous get-ups for something much more frightening.

7. Cathy Kelley is a peach in her Princess Daisy outfit

Former WWE presenter and backstage interviewer Cathy Kelley poster her contribution to the holiday with an ode to Super Mario Bros Princess Daisy.

Princess Daisy is a legendary member of the video game genre, starring in games like Mario Kart.

Kelly wears the outfit of the iconic character while questioning anyone who asks her otherwise.

🚩🚩🚩🚩🚩🚩🚩🚩🚩 when he asks if you’re supposed to be a disney princess or something pic.twitter.com/ISUZ7hMOtR

Scarlette Bordeaux has been missing from WWE television for some months now, but she remained us of just what we are missing with a fabulous Halloween photoshoot.

She can be seen posing with other splendid characters such as Frankenstein’s Monster, SmackDown Superstar Shotzi Blackheart as Frank Henenlotter’s cult classic movie Frankenhooker.

While her newly confirmed fiance is everyone’s favourite neighbour, Mr Rogers. Now that is quite a quadrant of spooky characters.

Former NXT UK Champion Pete Dunne is one intimidating and scary performer as is, but when he dressed up as the horrifying Pennywise the Clown his threat went through the roof.

The effort is minimal but the effect is huge. Some well-placed makeup and a red balloon are all Dunne needs to forever haunt our dreams as the popular character from IT.

The New Day are one of, if not the most popular WWE trios. However, on Halloween in 2018 they paid homage to another legendary team, The Brood.

However, one thing should be noted, they didn’t replace their signature pancakes with goblets of blood.

Rhea Ripley and the Game, Triple H have a strong connection. The DX legend is the main reason Ripley got into wrestling, while Hunter is a huge advocate for the Nightmare and has heralded her star power many times.

As Ripley’s childhood hero became her mentor is was only right she pay tribute to the Game in spectacular Halloween tradition.

Along with fellow Australian Shane Thorne, they paid homage to the DX duo of Triple H and Chyna in a strikingly effective fashion.

I’ve said it before, and I’ll say it again. HHH is the reason I started watching wrestling, and the reason that I started wrestling. It’s WILD to think that you are now my boss! I hope that I can make you proud. 🙌🏼 pic.twitter.com/MxdNbJqrsv

The ode to one of music’s greatest videos features everything one would want from a Thriller recreation.

The video features some fun special effects and serious dance moves from Montez.

1. Kayla Braxton is the special counsel to the Tribal Chief

Kayla Braxton and Paul Heyman have a tumultuous relationship. Stemming from their days as co-hosting Talking Smack, they were always at each other’s throats.

Once Heyman took his role as the special counsel to the Tribal Chief, Roman Reigns their back-and-forth jabs heightened, especially when Brock Lesnar returned.

Braxton would harass Heyman for an answer as to where his allegiance lies, often resulting in fierce backlash from the former ECW owner.

Braxton took their rivalry to the next level when she hilariously dressed up Heyman for this year’s Halloween.