WWE has produced hundreds of pay-per-views ever since the inaugural WrestleMania was made available to a small number of pay-per-view customers in 1985.

In the mid-2000s, WWE began to experiment with their pay-per-view formula. The company introducing gimmick events such as the internet voting themed Taboo Tuesday and Cyber Sunday and Hardcore themed shows such as One Night Stand and Extreme Rules. Later in the decade and into the 2010s, WWE added more and more themed shows to it’s annual output.

However, for every Hell in a Cell and TLC, there are events that did not resonate with the WWE Universe. This feature lists five themed pay-per-views that were never repeated.

Breaking Point was a pay-per-view wherein the major matches had to be won via submission.

D-Generation X took on Legacy in a Submissions Count Anywhere bout, which was an interesting concept. The Tornado rules ensured the bout kept moving at a frantic pace. Cody Rhodes locked Shawn Michaels in a Figure Four Leglock around the ring post, whilst Ted DiBiase held him in the Million Dollar Dream for the clean win via submission.

World Heavyweight Champion, CM Punk was red hot entering his series with The Undertaker after a blistering feud with Jeff Hardy. It was a gigantic disappointment then that their Submission Match ended in yet another Montreal Screwjob re-run. As Punk placed ‘The Phenom’ in the Anaconda Vice, the bell rang without The Undertaker submitting.

Breaking Point was a lacklustre show and the buy rate was similarly disappointing. The event pulled a paltry 169,000 buys. It’s no surprise that WWE never repeated the gimmick for another pay-per-view.

As ratings and the ideas well ran dry in 2010, WWE introduced more gimmick events to its pay-per-view calendar. One of the least original was Fatal 4 Way.

The event drew a woeful 143,000 buys on pay-per-view. That was 35,000 less than The Bash, which had taken place in the same slot the previous year.

The show’s three headline matches were all Fatal 4-Way bouts. The first of which saw the Diva’s Title defended as Alicia Fox bested champion Eve Torres, Gail Kim and Maryse in a basic bout.

Finally, a clean sweep of new champions was completed when Sheamus raised his second WWE Championship versus champion John Cena, Randy Orton and Edge. The match was decent but Sheamus’s big moment was completely overshadowed by The Nexus storming the ring and destroying everyone and everything, in and around it.

WWE never promoted another Fatal 4-Way pay-per-view again, although they did revive the name for an early NXT TakeOver in 2014.

The bout lasted an epic 77 minutes and is best remembered for Titus O’Neill’s infamous slide under the ring during his entrance.

The match was harmed by the lack of stakes involved. In all Royal Rumble matches since 1992, a prize has been on offer to the victor, whether it be the WWE Championship, as it was in 1992 and 2016, or to be named the number one contender to a WWE World Title at WrestleMania. The event also came just three months after WWE’s previous Royal Rumble event and therefore lacked prestige.

Braun Strowman won the ‘Greatest’ Royal Rumble match and claimed an oversized trophy and title belt, but his victory was quickly forgotten and it did little to elevate ‘The Monster Among Men’ to the headline bracket.

Strowman was released by WWE in June 2021 and the 50-Man Royal Rumble gimmick has never been repeated.

Evolution is the only themed show on this list that was an unadulterated critical success. That makes it all the more puzzling then, why this event has never had a sequel.

In October 2018, WWE promoted it’s first and to date last all women’s event. The show marked the culmination of the Women’s Revolution that saw the company give a larger role to it’s female performers in the second half of the 2010s. The new generation of WWE women wrestlers lived up to the challenge and Evolution was the perfect forum to mark the changing of the guard.

From there, the card kicked into fifth gear. Toni Storm bested Io Shirai in a blinding battle in the finals of the 2018 Mae Young Classic. The team of Sasha Banks, Bayley and Natalya rolled over The Riott Squad in a rewarding bout and NXT Women’s Champion, Shayna Baszler defeated Kairi Sane in a blistering match-up.

SmackDown Women’s Champion, Becky Lynch beat Charlotte Flair in one of the greatest women’s matches ever held in the West, in a high octane and dramatic Last Woman Standing bout.

The headliner saw Raw Women’s Champion, Ronda Rousey turn back the challenge of Nikki Bella in a very good contest to retain the gold.

Evolution was a stunning event top to bottom and it’s a shame that to date the pay-per-view theme has never been revisited. 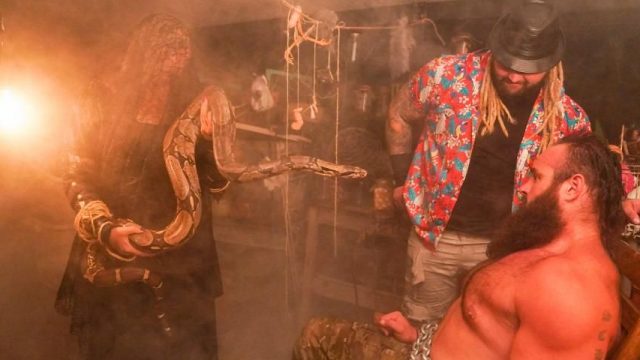 During the height of the COVID-19 pandemic, WWE experimented with their pay-per-view events. The Money in the Bank briefcases were hoisted atop Titan Towers, Backlash played host to ‘The Greatest Wrestling Match Ever’ in a bout with piped in crowd noise and NXT TakeOver took place In Your House.

However, perhaps the strangest themed show of them all was The Horror Show At Extreme Rules.

Four of the shows six bouts were contested under Extreme Rules. The more baffling match types were the never to be repeated Eye for an Eye Match and The Wyatt Swamp Fight.

Seth Rollins apparently gouged out Rey Mysterio’s eye in the climax to their ridiculous match-up. So repulsed by Mysterio’s detached eyeball, the victorious Rollins threw up at ringside. It was an unforgettable scene for all the wrong reasons.

Bray Wyatt cycled through several incarnations of his character in a tedious PG Horror Film parading as a pro-wrestling bout.

‘The Fiend’ dragged an unsuspecting Strowman into the swamp to apparently win the match and end the event on a baffling note.

With crowds now back in arenas, these type of bouts would not play well to the masses in the arena. It should come as no surprise that The Horror Show At Extreme Rules was a one time only event.