It’d be safe to say this result was ever so slightly divisive.

While some bemoaned a talent who is reaching nearly 20 years since their debut claiming another World Championship over ANOTHER promising champion in Big E, others have been fascinated by Brock Lesnar’s recent babyface work and enthralled in his love triangle with Roman Reigns and Paul Heyman, with that excitement furthered by a dream match with Bobby Lashley at the Royal Rumble.

It’s typical of Lesnar to cause such division. He’s a man who has so often been the figurehead of WWE fans’ discontent while also being one great performance away from being right back in fans’ good graces.

As a wrestler, Lesnar has always been described as a marvel. A freak specimen of raw speed, power and agility who looks like he regularly eats whole cows and hammer throws horses in his spare time. His raw magnetic charisma is too undeniable, and his intensity is such that I would likely die immediately if I ever found myself in a scenario where this beastly boy was charging his way at me.

This same astounding complexity could too be applied to the wider impact Brock Lesnar has had on the wrestling world in general. 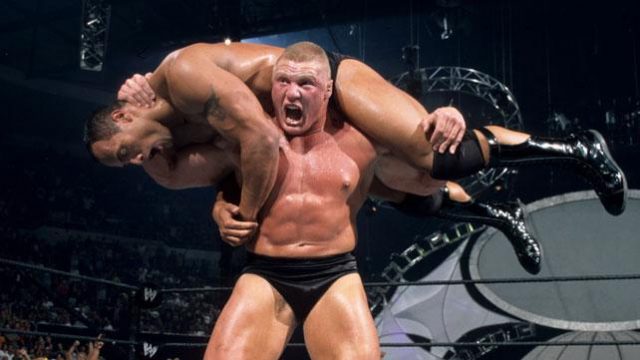 Throughout his first run in WWE between 2002 and 2004, the controversy that would soon surround Lesnar had yet to fully form, but tastes of it were in the air.

Any doubts of the legitimacy of the man made in a WWE laboratory had been squashed by the time he took the Undisputed Title from The Rock at SummerSlam in the year of his debut, a proper indication that fans were on board with ‘The Next Big Thing’.

The face of the Ruthless Aggression era lived up to his nickname in the following years, putting on classics against Kurt Angle and The Undertaker, holding numerous WWE Championships, winning the Royal Rumble and the last real version of King of the Ring. Even his less extravagant moments like impaling himself in the WrestleMania 19 main event were still legendary, such was the power of The Brock (and his ghost neck).

The fans were so behind Lesnar as THE GUY in 2002, that he was feverishly cheered over the departing Dwayne Johnson during his crowning moment, a lighter mirror of the dark departure Lesnar would have from the Fed two years later. A notorious stinker with Goldberg at WrestleMania XX informed the first real evidence of Brock’s apparent distaste of the business that fans believe made him, with a post-match double-bird given to the crowd and Vince McMahon living long in the memory of wrestling fans after they left Madison Square Garden.

If nothing else, the end of Brock Lesnar’s first WWE run had showed us two things that would go on to define his wrestling career. The first, the ‘normal’ wrestling life wasn’t for him. The second, this would ALWAYS take precedent over any good work he did. A failed NFL venture, awkward NJPW run and a UFC run you may have heard of later, Lesnar was ready for round two in WWE, in the run which still lives on to this day.

This was a different man in 2012 though. A man who had grown accustomed to a lesser travel schedule and beyond business savvy after becoming a box office smash hit in the UFC, the mistakes he made during his first WWE run were not to be made again.

Brock Lesnar’s 2012 WWE return too came at the beginning of the part-timer era at WWE which too persists at present. The Undertaker was deep into his one match a year formula with The Streak still in tact, and with Triple H and The Rock still coming and going, a returning ‘Beast’ fit perfectly into this category.

It was too in this age that part-timer became a dirty phrase among wrestling circles, used both in and out of the realm of kayfabe as a snide comment to undermine an older wrestler’s ability or to exhibit their perceived laziness.

Given Lesnar’s penchant for the latter, he was proved far from endearing to audiences upon his return, yet the obvious positives of ‘The Beast’ remained.

His very real success in UFC was implemented into his wrestling persona. Gone were the trunks and in were the fight shorts and busting open John Cena hard way. Brock Lesnar has mastered the medium of mixed martial arts and geared it towards western wrestling in the same way ‘strong style’ had in Japan, introducing a crossover legitimacy that would inspire the likes of Ronda Rousey and Matt Riddle among others down the line.

Like it or not, his return was major deal and was dealt with as such when he came back. 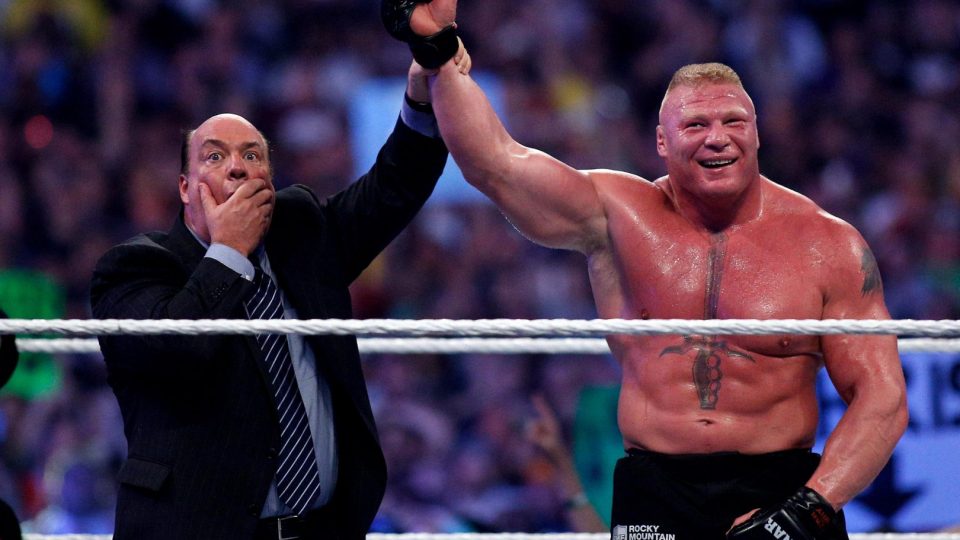 When thinking of who could have broken The Undertaker’s Streak in hindsight, Brock Lesnar isn’t a name that would immediately come to mind.

The likes of Bray Wyatt and Roman Reigns have been bandied about, but at the end of the day, neither of them were bankable attractions in 2014, the year WWE began to pivot into a content focused model through increasing social media coverage, YouTube, and the advent of the WWE Network.

Brock Lesnar GUARANTEED reliable focus on the product whenever he was around, whether fans agreed if he was the right choice or not. He was a safe bet.

This has proved to be the story of Lesnar’s second run so far.

Unlike the sword etched on his chest, the possession of Brock Lesnar as a wrestling commodity is double edged.

His believability as a proven fighter and box office draw gives his bouts unmatched intensity at the best of times, but at the worst of times can be used as crutch for easily breezing through ‘lesser’ opponents.

That Lesnar has proven himself already could also be used as an argument to say Lesnar HAS to feature in main event positions every time he steps into the ring, such is the aura he possesses that he can elevate anyone and anything when he’s on.

Yet, Lesnar being ‘on’ is a whole other issue. 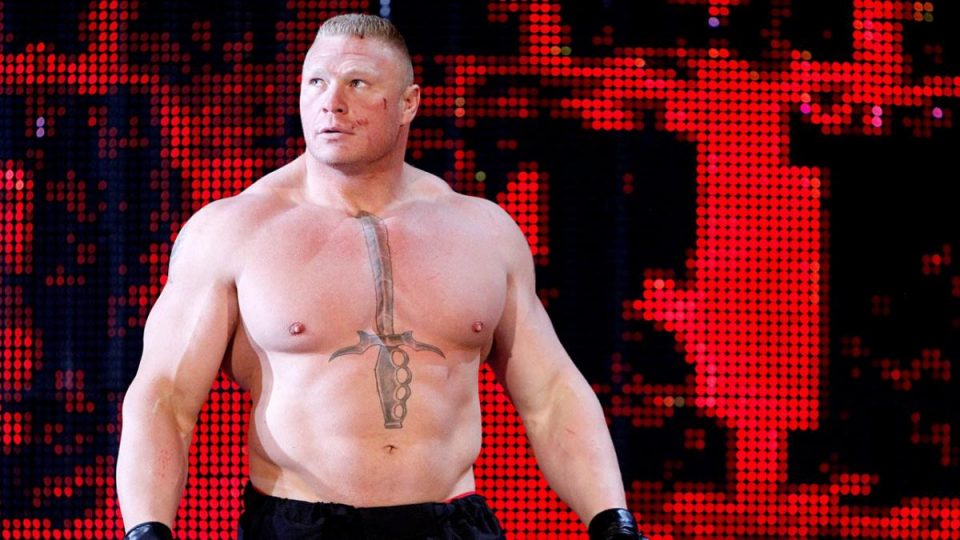 Brock will infuriate fans by breaking the streak, then become the hottest thing in wrestling for almost two years between 2014 and 2016 through the introduction of ‘Suplex City’.

The stellar squash of John Cena at SummerSlam, finish-spamming Triple Threat epic with John Cena and Seth Rollins at the otherwise dire Royal Rumble 2015, and truly amazing Roman Reigns effort at WrestleMania 31 were indicators that Lesnar CAN be used in all the right ways FOR all the right reasons.

Him breaking the streak proved to be a blessing as he could put together a match worthy of the stakes that Undertaker couldn’t at his advancing age and deteriorating physical condition.

Yet WWE never found someone for Lesnar to truly elevate at the right time, and grew to use Lesnar in all the WRONG ways, inciting ‘The Beast’s’ apparent “laziness”.

As quickly as Lesnar is hated, he’s beloved, and vice versa. His talents are rarely questioned, but his will to use them and WWE’s ability to use them correctly seems a never-ending battle that has effected the perception of Brock’s legacy. 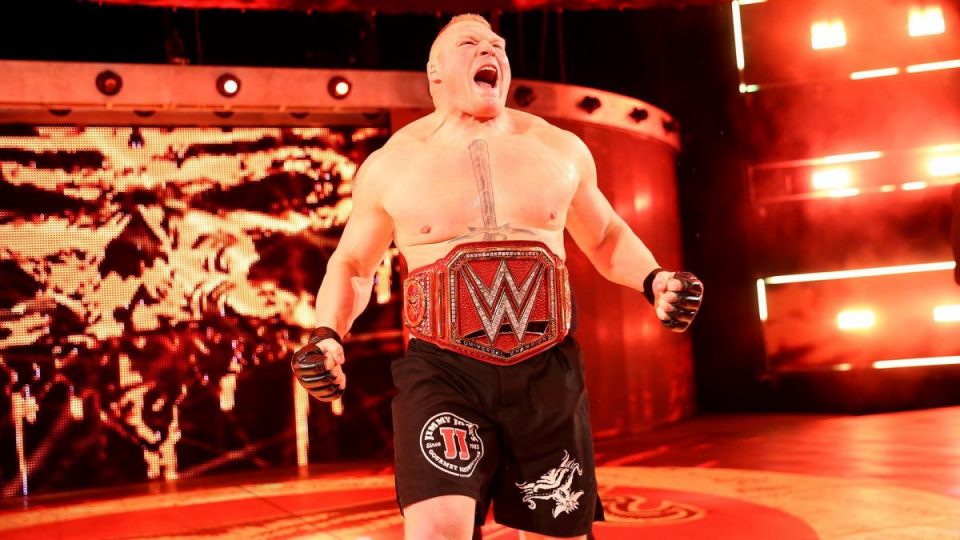 The deeper into the 2010’s we grew, the deeper the problem became rooted.

Goldberg sprints in 2016 and 2017 were fun, but remained apart of the larger issue, as did a one-off Samoa Joe exhibition that at least served to elevate a new talent, something Lesnar is THE BEST at but is rarely followed up on in any meaningful fashion when done at all.

The cycle began to grow to a point where no new star was realistically elevated enough to believably match up to or beat Brock, so he’d run through them. Ala Samoa Joe, Braun Strowman, AJ Styles, Daniel Bryan, Finn Balor, Ricochet, etc.

Fan sentiment hit highs and lows through this period. Stellar encounters with Styles and Bryan seemed to be Survivor Series only rarities, while the likes of Strowman and especially Ricochet would’ve been better served never having encountered Lesnar at all.

A painfully long Universal Title run between 2017 and 2018 reached faux-epic length, with WWE’s obvious need to erase CM Punk’s 434 day reign and kill the momentum of Braun Strowman to then harness into Roman Reigns proved the story of a reign most would likely want to forget, and pushed the issues of Lesnar’s modern run to the forefront.

Largely, he’s been a WWE scapegoat for criticism in the times they’ve failed to create new stars despite them being laid consistently on their doorstep.

Fans were more likely go after Brock for his reign than WWE for refusing to advance the plethora of talent on a pre-pandemic roster which had grown bloated with obvious talent, main eventer after main eventer wasted.

Even when Lesnar has tried to elevate someone, like a Seth Rollins, the wheels fall off sooner rather than later. Drew McIntyre has perhaps proved an exception to the rule, but the amount Lesnar has been used to kill a run rather than make one, has become a frightening regularity.

Case in point, the main event runs of The New Day. The latest section of Lesnar’s run has been hard to narrow down though, as true discourse has been few and far between.

Lesnar’s pandemic-era absence seemed to make hearts yearn for a return during those dire days, but results have been mixed following a SummerSlam 2021 return.

The top knot was an inspired choice from the man himself and his wardrobe choices are ones Seth Rollins and Becky Lynch could only dare dream of, yet his creative direction has been controversial.

Perhaps in the ultimate case of his great individual work being undermined by otherwise poor creative, Brock has shined in a new babyface role, equal parts scary farm hand and huggable, sarcastic bear. Yet still, his continued series with Roman Reigns and the prospect of yet another WrestleMania main event between the two has left a lot to be desired.

WWE’s beginning to 2022, as mentioned in the intro, has been similarly bi-polar in how it has endeared Lesnar to fans.

One moment he’s used as the figurehead to end the reign of Big E, the next he’s in a dream match with Bobby Lashley.

At this point, I don’t know what to think or feel about Brock Lesnar. Except for the top knot, that thing’s bangin’. 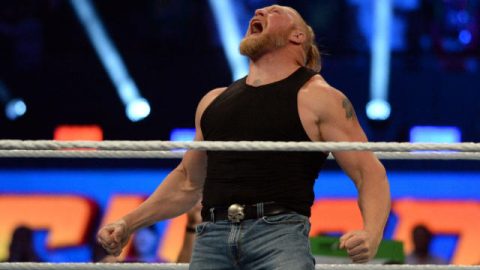 For the sake of a conclusion; let’s propose a question. When Brock Lesnar retires, what will his legacy be?

Will it be as a once in a lifetime athlete who dominated everywhere he went for two plus decades? Or will it be as the face of the part-timer era of WWE?

Will it be as the wrestler who’s legitimacy helped him elevate his opponents to new heights? Or as the guy who killed the momentum of even the brightest of younger stars?

Will it be as the man who pioneered the UFC crossover into pro-wrestling (with no disrespect meant to Ken Shamrock)? Or as the lazy, entitled multi-time world champion who only popped in for a pay check?

Whatever it may be, I won’t be the one to tell him.