The WWE Championship was conceived in April 1963 after the then-WWWF withdrew from the National Wrestling Alliance. WWE made former NWA World Champion, Buddy Rogers, their inaugural WWE Champion. The veteran Rogers was 42 years old when he was awarded the belt. He is one of the oldest wrestlers in the title’s six decade history. However, he wasn’t the oldest.

This feature looks at the five oldest wrestlers to have held the WWE Championship.

The reigning WWE Champion is also one of the oldest men to hold the title. He is the second oldest first time champion in the belt’s 58 year lineage.

Bobby Lashley dethroned The Miz in a memorable destruction on the March 1, 2021 Raw. Lashley successfully defended the title against Drew McIntyre at WrestleMania 37 on April 10, 2021.

Should Lashley set up permanent residence in WWE’s headline scene, the reigning champion could move up this list if he were to lose and regain the strap at a later date.

Bob Backlund held the WWE Championship for five years between 1978 and 1983. Backlund was just 28 years of age when he won his first WWE title. He was 45 years old when he won his second, some 17 years later. His surprise title win made him the belt’s oldest title holder in the strap’s then-three decade history.

Backlund was a transitional champion. He won the title from Bret Hart after chicanery from his brother, Owen with whom he had been feuding. The veteran then dropped the belt to WWE’s next big babyface hope, Diesel on a house show just three days later.

Triple H is one of the most honoured World Champions in WWE history. ‘The Game’ has won the WWE Championship on nine occasions and the now-defunct World Heavyweight Championship five times. He won all of his first 13 World titles within a decade between 1999 and 2009.

Seven years elapsed between ‘The Cerebral Assassin’s’ 13th and 14th World title wins. When Triple H won the 2016 Royal Rumble Match and the WWE Championship which was on the line, he was 46 years old. ‘The Game’ held the title until WrestleMania 32 when he dropped the belt to Roman Reigns.

Hulk Hogan won his first WWE Championship in January 1984 at the age of 30.

That title win kicked off a near decade of Hulkamania in WWE which took the company to unprecedented heights in terms of mainstream consciousness and popularity. ‘The Hulkster’ won his fifth WWE Championship at the age of 39, before departing WWE and joining WCW the following year. In February 2002, after nine years away from the company, Hogan returned to WWE.

After competing with The Rock in a classic Icon versus Icon battle at WrestleMania X-8, Hogan was selected to be the next WWE Champion. ‘The Hulkster’ pinned Triple H in the main event of Backlash on April 21, 2002 to win his sixth WWE title at the age of 48. That title win made Hogan the oldest active wrestler to have been WWE Champion.

However, he isn’t the oldest man to hold the belt… 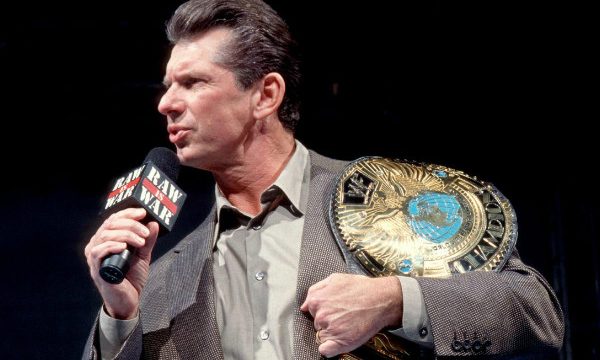 The owner of WWE is the oldest title holder of WWE’s premier title. Vince McMahon won the WWE Championship from Triple H (with a little help from Stone Cold Steve Austin) on the September 16, 1999 episode of SmackDown.

At 54 years of age, the WWE Chairman was and still is the oldest title holder in the strap’s 58 year history. The history making title change was short-lived. McMahon relinquished the belt on the following week’s Raw broadcast on September 20, 1999.

The WWE Championship was then put up for grabs in a Six Pack Challenge at Unforgiven six days later. That bout saw Triple H regain the title.

You can watch all of these title changes exclusively on the WWE Network. You can also check out our article on the five youngest ever WWE Champions here.