The Survivor Series has been a permanent fixture of WWE’s annual pay-per-view calendar since 1987.

Originally a gimmick pay-per-view which saw teams of five, strive to survive, the show began to present singles matches from the 1991 event onwards.

The show has played host to numerous World Championship bouts from that point on. However, on only five occasions, has a wrestler won their first WWE World Title on the show. This feature lists them all.

The Undertaker famously debuted at the 1990 Survivor Series. Fast forward 12 months and he was challenging WWE Champion, Hulk Hogan at the same event.

This match marked the first time a singles encounter had ever taken place at Survivor Series. Regrettably, the bout was terrible. However, it was notable for the result. ‘The Phenom’ captured the WWE Championship from ‘The Hulkster’ after a Tombstone Piledriver on a steel chair.

That was the first of seven WWE World Championship wins during ‘Taker’s WWE career.

A title re-match took place just six days later at This Tuesday in Texas. The Undertaker dropped the strap back to Hogan in a chaotic match-up filled with extra curricular activity.

The Undertaker would not win a second WWE Title until WrestleMania 13, some five and a half years later.

Sycho Sid was a major star in both WWE and WCW throughout his career, but in late 1995, he had seemingly burned his bridges in both companies. He had failed a drug test prior to the main event of WrestleMania VIII. Instead of serving a suspension, he walked out of WWE.

Sid resurfaced in WCW in May 1993. However his run there was short-lived after he stabbed Arn Anderson over 20 times following a heated argument. Unsurprisingly, the former Skyscraper was fired on the spot.

WWE presented Sid with another chance in early 1995 as Shawn Michaels’s bodyguard. Ironically, his biggest opportunity in the company came opposite Michaels with the WWE Championship at stake.

At the 1996 Survivor Series, Sid won the gold when he defeated ‘The Heartbreak Kid’ in a stunning bout.

The Madison Square Garden crowd loudly booed the babyface champion and cheered Sid, the heel challenger in an unforgettable match-up.

Despite his victory, Sid’s championship reign would not last long. He dropped the belt back to Michaels at Royal Rumble 1997 in another exciting encounter. 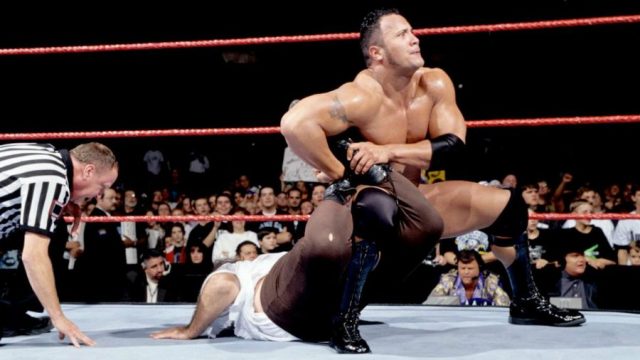 After a difficult few years, WWE rebounded in a big way in 1998. Led by the ground-breaking Stone Cold Steve Austin versus Vince McMahon feud and an array of colourful characters, the company surpassed WCW as the number one wrestling promotion in the world. It was a position they would never relinquish.

Despite Stone Cold unquestionably being the star of the show, the fastest rising star in WWE was The Rock.

The Rock began 1998 as Intercontinental Champion and a member of the mid-card faction, The Nation of Domination. He ended it as the (then) second youngest WWE Champion of all time and the focal point of The Corporation faction, with the McMahon family at his side.

That pivotal title victory occurred at the 1998 Survivor Series.

The WWE Championship was vacant after Stone Cold Steve Austin had been pinned simultaneously by The Undertaker and Kane in the headliner at BreakDown.

Survivor Series played host to a one night tournament to crown a new WWE Champion.

The Rock bested The Big Boss Man (in five seconds), Ken Shamrock, The Undertaker and finally Mankind to claim the gold and his first World Championship.

Post-match, it was revealed that the babyface Rock was a turncoat and had secretly aligned with the McMahon’s in order to win the belt. The title victory positioned The Rock as the new number one star in the company. ‘The Great One’ went on to capture a further seven WWE Championships over the next 13 years.

The Big Show is the only wrestler on this list who had held a World Title before his victory at Survivor Series.

As The Giant in WCW, Show had captured the WCW World Championship twice between 1995 and 1996.

Signing a mega 10 year contract with a $1 million downside, WWE were very keen on receiving something for their considerable investment.

So, despite a lacklustre start to his WWE run, which had begun eight months earlier, Show was thrust into the main event scene in November 1999.

After Stone Cold Steve Austin was pulled from the Triple Threat WWE Championship bout at Survivor Series 1999 due to a serious neck injury, The Big Show was his last minute replacement.

The Big Show pinned WWE Champion, Triple H to win his first WWE Championship. However, his reign would be short-lived. Show would drop the belt back to ‘The Game’ two months later on the January 3, 2000 Raw.

Back in 2015, ‘The Tribal Chief’ was floundering as a babyface headliner and WWE had been forced to delay his coronation as World Champion on several occasions.

However, when the reigning WWE Champion, Seth Rollins suffered a serious knee injury (which benched him until the summer of 2016) and was forced to vacate the title, WWE tried again with Roman Reigns.

The vacant strap was put up for grabs in a tournament and the 2015 Survivor Series played host to the Semi-Finals and Final. Reigns bested Alberto Del Rio and finally his buddy, Dean Ambrose to capture the WWE Championship for the first time.

Unfortunately, for Reigns, this reign would last only mere moments. Money in the Bank contract holder, Sheamus would cash in his briefcase and relieve the new champion of the gold.

Reigns would recapture the title several weeks later on Raw.