Starrcade was WCW’s WrestleMania and actually pre-dated WWE’s flagship show by two years. There were 18 Starrcade events between 1983 and 2001.

There were only nine wrestlers who headlined Starrcade more than once. This features lists them all. 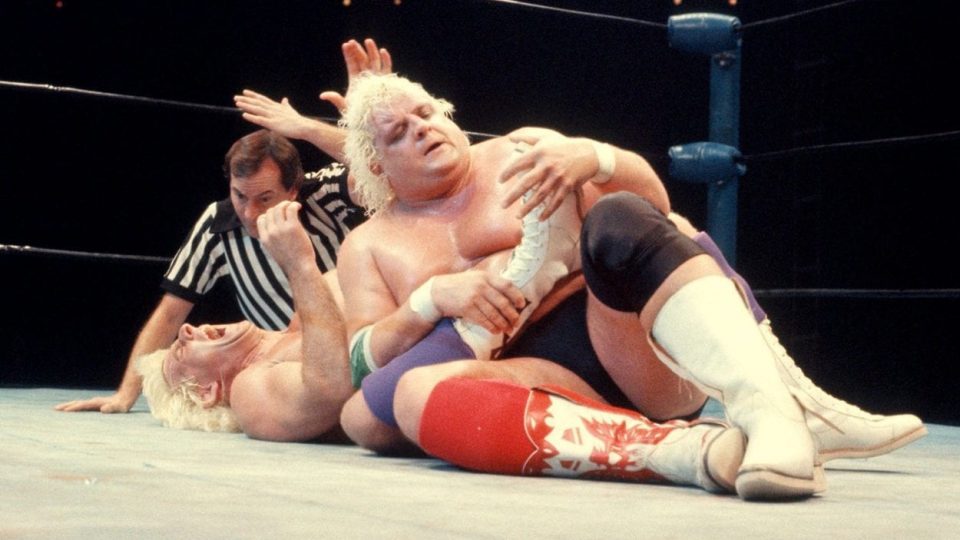 At Starrcade 1984, Rhodes unsuccessfully challenged ‘The Nature Boy’ for the NWA World Championship. The match was poor and an insult as the main event of the biggest show of the year for Jim Crockett Promotions. Flair won, when special referee, ‘Smokin’ Joe Frazier ruled that Rhodes couldn’t continue due to a cut.

In 1985, Rhodes erased memories of the previous year’s fiasco by capturing the World crown by pinning ‘The Nature Boy’ in a decent bout. Lex Luger headlined Starrcade on two occasions. He first opposed Ric Flair in a superlative match-up for the NWA World Championship at Starrcade 1988. After a terrific 31-minute encounter, ‘The Nature Boy’ pinned ‘The Total Package’ with his feet on the ropes.

By the time Starrcade 1991 rolled around, Luger was the WCW World Champion. However, that didn’t help ‘The Total Package’ win the BattleBowl main event. Luger did make it to the final two of the 20-Man Battle Royal. However, the champion was eliminated by Sting.

Luger never headlined another Starrcade event, despite competing in another five, before WCW was bought out by the WWF in March 2001.

When one thinks of Starrcade main events, one does not automatically think of career mid-carder, Dustin Rhodes.

However, the future Goldust headlined two consecutive Starrcade events by virtue of competing in the inaugural two BattleBowl Battle Royal bouts. Rhodes’s presence on this list does mark the only father and son to have both headlined Starrcade.

Rhodes did not make much of an impression on the 1991 BattleBowl main event but did make the final four of the 1992 BattleBowl but was eliminated by Barry Windham.

Goldberg made his pay-per-view debut at Starrcade 1997. He headlined the following two Starrcade events in 1998 and 1999.

Unfortunately for ‘Da Man’ he came up short on both occasions. At Starrcade 1998, his 173 match undefeated streak was snapped by Kevin Nash and a cattle prod. Goldberg was relieved of his WCW World Title and astonishingly would never regain it.

The following year, Goldberg challenged WCW World Champion, Bret ‘Hitman’ Hart for the gold. Whilst Hart held Goldberg in the Sharpshooter, ‘Rowdy’ Roddy Piper marched down to the ring and instructed the timekeeper to ring the bell in another tired Montreal re-run. 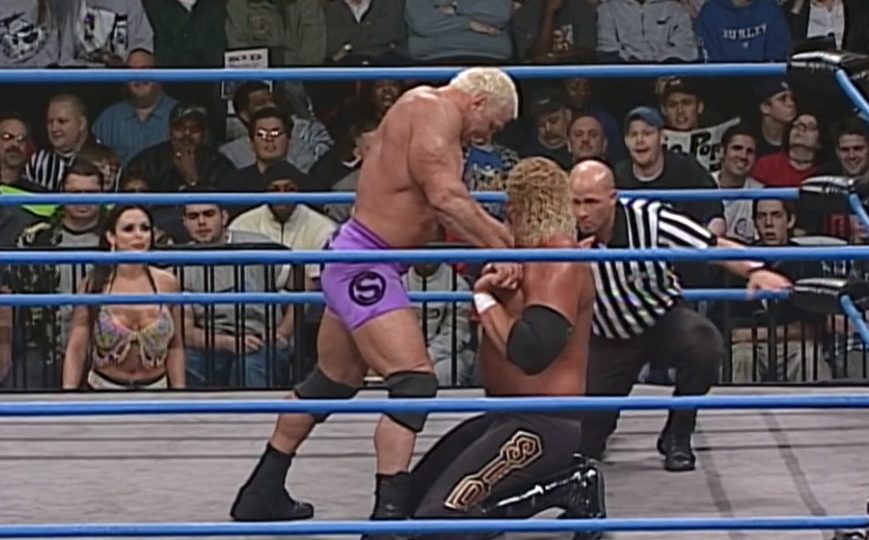 Scott Steiner headlined Starrcade twice. He was one of 20 participants in the 1991 BattleBowl. Steiner made little impression on that bout but fared better when he returned to the Starrcade top liner in 2000.

In the final ever Starrcade main event, ‘Big Poppa Pump’ bested Sid Vicious in an entertaining battle of the giants. The WCW World Champion locked Vicious in the Steiner Recliner until the challenger passed out.

Hulk Hogan headlined eight out of the first WrestleMania events. However, he only headlined three Starrcade shows.

He main evented his first Starrcade in 1994 versus The Butcher (the former Brutus ‘The Barber’ Beefcake), incredibly. He was absent from Starrcade 1995 but returned to headline the 1996 and 1997 editions.

In 1996, Hogan fell to ‘Rowdy’ Roddy Piper in a match-up, wherein ‘Hollywood’s’ WCW World Championship was not at stake. The following year, the nWo leader was defeated by Sting, in the ‘Icon’s’ first match in over a year. This time Hogan did lose the WCW World Title, albeit in controversial fashion, which necessitated a re-match at SuperBrawl VIII, two months later, which Sting also won.

Hogan only ever competed at three Starrcade events and headlined every single one of them. 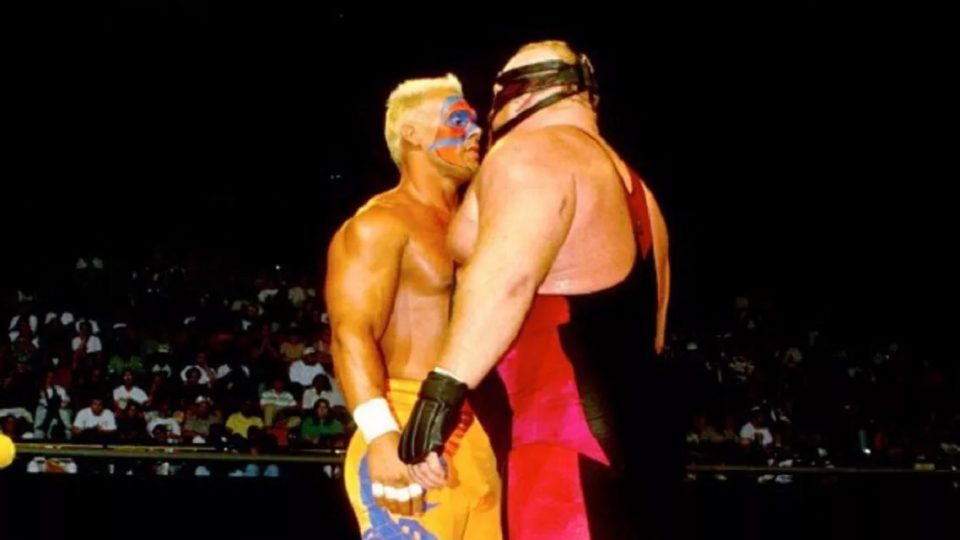 He first headlined Starrcade 1991 as one of the participants in the BattleBowl. He also took part in BattleBowl 1992 in the headlining Battle Royal. However, ‘The Mastodon’ won neither bout.

Vader defended the WCW World Championship in the classic main event of Starrcade 1993. In a blistering 21 minute match-up, Ric Flair tripped and cradled the big man to claim the gold.

‘Big Van’ Vader headlined three consecutive Starrcade main events, but did not win any of them.

Sting was the franchise player for WCW throughout the 1990s. His perennial headlining of the company’s biggest show, Starrcade proves that fact.

‘The Stinger’ actually headlined his first Starrcade in 1989 as part of the Iron Man tournament. Results meant that the winner of Sting versus Ric Flair would be declared the Iron Man. After some decent back and forth action, Sting proved he was Flair’s successor by pinning his rival’s shoulders to the mat.

The following year, the pair clashed again, this time with Sting’s WCW World crown at stake. However, this time, Flair was competing under a mask as the devious ‘Black Scorpion’ character. Sting retained the gold in an average bout.

At Starrcade 1992, Sting once again competed in the BattleBowl headliner. This time however, ‘The Stinger’ came up short as The Great Muta last eliminated Barry Windham to win the match.

After a five year absence, Sting returned to the Starrcade main event after a 15-month build in which ‘The Icon’ lurked around the rafters and stalked the nWo; in particular, WCW World Champion, ‘Hollywood’ Hulk Hogan.

No one is more synonymous with Starrcade than the ‘Nature Boy’ Ric Flair. If Shawn Michaels is ‘Mr WrestleMania’ then Flair is surely ‘Mr Starrcade’ due to his superlative performances and perennial status as event headliner. The first Starrcade event in 1983 was built around Flair and billed as ‘A Flair for the Gold.’ Challenging Harley Race, the ‘Nature Boy’ lifted his second NWA World crown.

In 1984, he successfully defended his NWA World Championship against Dusty Rhodes. The following year, Rhodes avenged his prior defeat. In 1986, Flair kicked off an undefeated steak at the next three Starrcade’s. He fought Nikita Koloff to a cheap double disqualification. In 1987, Flair upended Ronnie Garvin for his sixth NWA World Title. The following year, he bested Lex Luger in a superlative outing to defend the gold.

In 1993, at the tenth anniversary of the show, Flair returned to the main event and defeated Vader in a gripping headline attraction to lift the WCW World Title. Two years later, the ‘Nature Boy’ defeated ‘Macho Man’ in a good match to claim another WCW World crown.

You can watch every Starrcade event exclusively on the WWE Network.