No stranger to WWE Championship Titles, the first Irish WWE Champion in history, born Stephen Farrelly, but better known to the WWE Universe as Sheamus will attempt to become a WWE ‘Grand Slam’ winner at Clash at The Castle on September 3rd at the Principality Stadium in Cardiff, Wales.

Debuting on the main roster in October 2009, Sheamus quickly rose to the top and has been a mainstay of the WWE roster since, displaying a longevity not often seen in WWE. With a unique look and physique that WWE officials always favour, coupled with a distinctive style and move set, Sheamus has remained a constant ever since his debut.

Many have come and gone, but the Great White has remained, competing and winning titles throughout his WWE tenure.

Born in Dublin Ireland, the 270 pounder honed his skills across the Irish and UK scenes before try-outs with WWE proved successful in 2006 and 2007. He spent the next couple of years in WWE developmental territory Florida Championship Wrestling (FCW), before being promoted to the ECW brand in summer 2009 and then the main roster proper within months.

Sheamus is a three-time WWE Champion, a one-time World Heavyweight Champion, a WWE King of the Ring, a Royal Rumble winner, Money in the Bank winner and a five-time Tag Team Champion (four Raw reigns and one SmackDown) as well as a three-time United States Champion.

However one title has famously alluded the Irishman and he hopes to rectify that at the biggest British WWE event in thirty years, when in a first time ever match up, he challenges Gunther for the Intercontinental Title. Can Sheamus come full circle and join the WWE’s true elite as a Grand Slam winner at Clast at the Castle?

On the cusp of the historic UK event, we look back at Sheamus’ other title victories throughout his WWE tenure.

Sheamus debuted on the October 26th 2009 Raw by defeating Jamie Noble, after ‘retiring’ Noble after a series of vicious attacks. Sheamus was part of the victorious team Miz at the 2009 Survivor Series, eliminating John Morrison and picking up a symbolic pin over then top Irish WWE Superstar Finlay.

Quickly establishing himself on the red brand, Sheamus would win a Breakthrough Battle Royal to become number one contender for John Cena’s WWE Title and shockingly defeated the leader of the Cenation at the TLC PPV in December, just 166 days after his main roster debut.

The result was a huge surprise at the time with Cena arguably at the peak of his powers. Although heavily protected, as the match was in the mid card of the event and contested under Tables Match rules meaning Cena never had to be pinned to lose the title, that’s exactly what happened. After a back and forth brawl, Sheamus pushed Cena off the top rope backwards sending him crashing through a table in the ring. ‘Big Match John’ had been defeated and the Celtic Warrior had officially arrived as the new WWE Champion.

Sheamus would hold his title into 2010, defeating Randy Orton at Royal Rumble by DQ before his luck ran out at Elimination Chamber where he lost his grasp on the gold after being Pedigreed and pinned by Triple H.

Sheamus was kept strong after his initial title loss, entering into a high profile feud with Triple H which saw Sheamus contest his first WrestleMania match in a losing effort to The Cerebral Assassin at WrestleMania 26 before defeating him soundly to gain revenge in a Street Fight at 2010’s Extreme Rules.

At the first and only WWE Fatal Four Way PPV that June, in scenes similar to that past December, Sheamus shockingly won the WWE title for a second time, defeating champion Cena again alongside other challengers Edge and Randy Orton in the main event Fatal Four-Way match. Sheamus was mixing with top company and had become a x2 time WWE Champion in just eight months.

This second reign saw him best Cena in a Steel Cage at Money in the Bank, retain again by DQ against Orton at SummerSlam, before losing the title to Orton during a six pack challenge at Night of Champions that September.

Although a x2 time Champion, Sheamus had had very few clean wins over the established superstars of the time over both of his reigns. He had broken through the glass ceiling into main event contention, but as we would see throughout his WWE career, he would yo yo back and forth between the main event and the mid card over time. 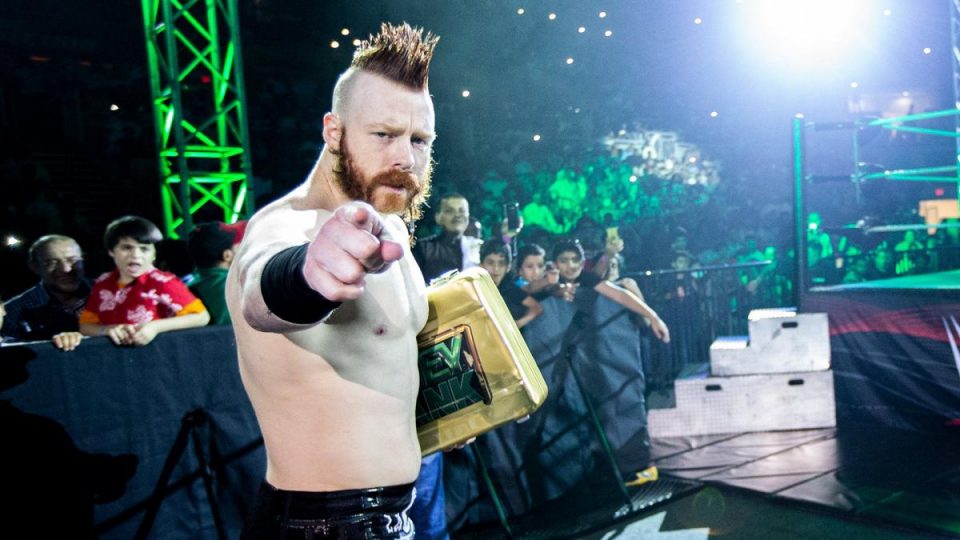 Sheamus would have to wait until 2015 for another WWE Title reign. Once again, in a surprise he became Mr. Money in the Bank that June, beating Roman Reigns, Randy Orton, Dolph Ziggler, Neville, Kofi Kingston and Kane to the coveted briefcase.

He timed his cash in for the end of the Survivor Series tournament to crown a new champion that November (after champ Seth Rollins had to vacate the title after sustaining an injury on a European tour). Having already been eliminated from the tournament in the earlier rounds by Cesaro, Sheamus cashed in his title shot on new champ Roman Reigns who had finally won the gold after defeating Shield brethren Dean Ambrose in the tournament final.

The reign would be short lived however. After beating Reigns in a Tables, Ladders and Chairs match at the following month’s TLC PPV, Reigns regained the title the next night on Raw, making Sheamus’ third reign last just 22 days. 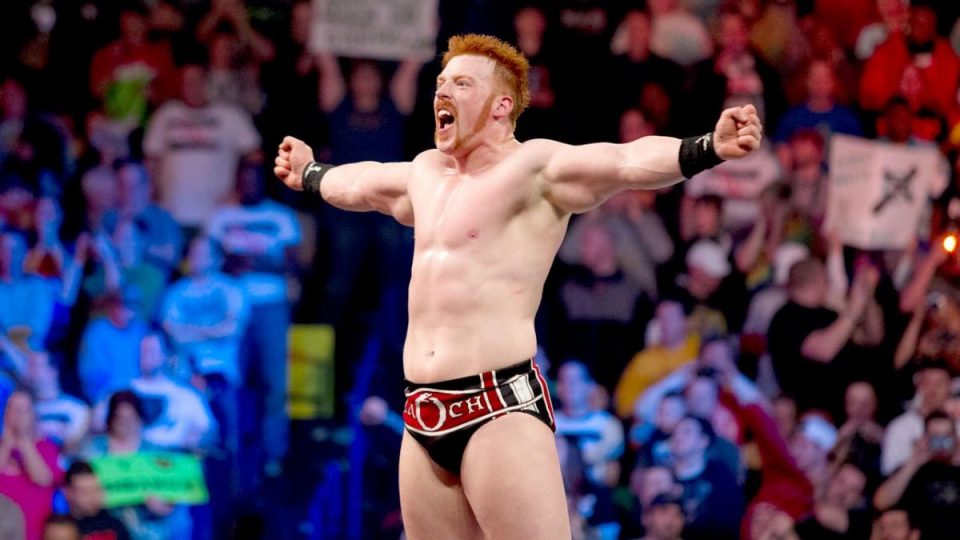 After a twelve match winning streak across WWE television, the Irish Curse entered the Royal Rumble as a commentator’s favourite (although in truth most of the WWE Universe expected a freshly returned Chris Jericho to win the Rumble).

In fact, it was Sheamus who booked his ticket to WrestleMania 28 by last eliminating Jericho after an excellent final two segment. Entering at number 22 and surviving for 22 minutes, Sheamus also eliminated Kofi Kingston and Jack Swagger on his way to Rumble glory. 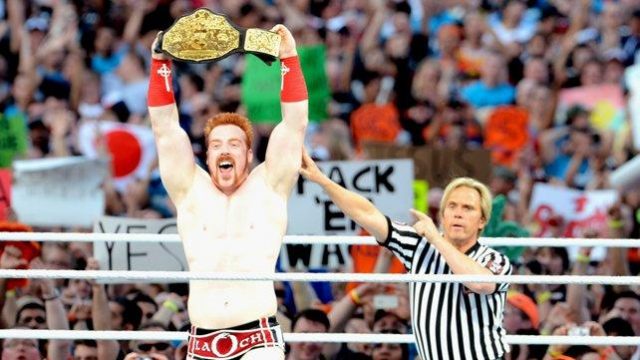 Sheamus would go onto WrestleMania 28 for his World Heavyweight Championship match against Daniel Bryan. Disappointed to be going on first, the pair were even more disappointed to find out they were to be given just 18 seconds of match time at the biggest event of the year.

A kiss from AJ Lee distracted Bryan allowing an immediate Brogue Kick and a three count later, Sheamus was champion.

The reign that followed was the best of Sheamus’ career. Across 210 days he met and defeated Daniel Bryan, Alberto Del Rio, Chris Jericho, Randy Orton and Dolph Ziggler amongst others. He would eventually lose the title in a somewhat hidden gem of a match considering who was involved, against the Big Show at Hell in A Cell 2012. His World Heavyweight Title reign was the third longest during its WWE history to that point. 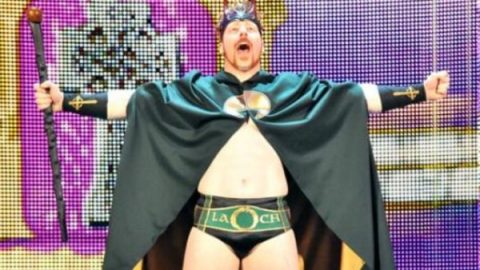 It’s not only title belts that Sheamus has raised during his WWE career, the aforementioned Money in The Bank win followed a much less remembered tenure as King of the Ring in 2010. WWE still had high hopes for Sheamus after his then x2 WWE title victories and he duly won the 2010 version of the King Of The Ring tournament held as part of the November 29th 2010 Raw. The tournament was the first incarnation since William Regal won the crown in 2008.

Sheamus beat Kofi Kingston following a Brogue Kick in a strong six-minute TV encounter that packed everything it could into its slim timeframe and then followed it up by pinning John Morrison after the high cross in the final in front of a hot crowd to win the crown.

Sheamus would wear a bespoke crown and cape, sticking close to his Celtic roots, with a shillelagh instead of a sceptre, that made him stand out from previous kings, although the get up only lasted a few weeks. 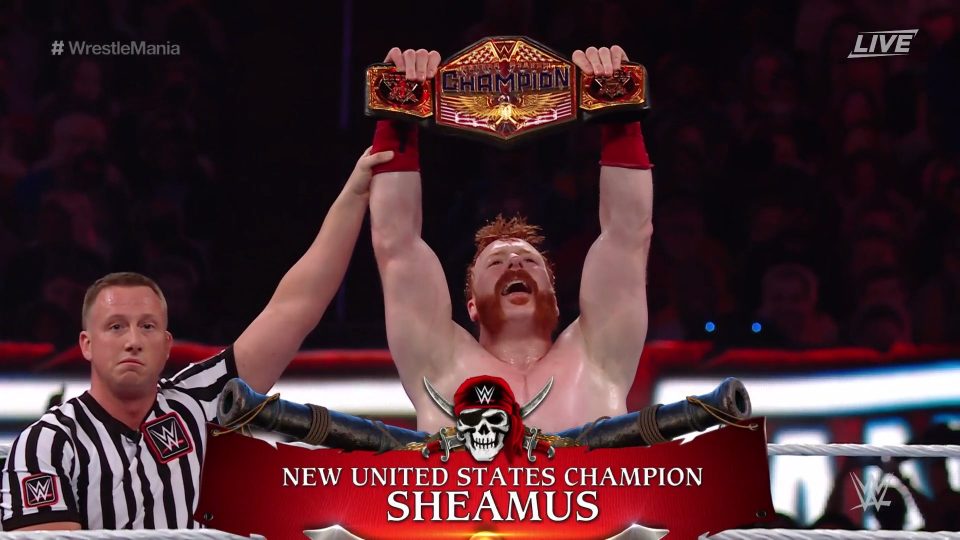 March 14th 2011 saw Sheamus win the first of his three U.S. titles when he beat Daniel Bryan on Raw. After being on somewhat of a losing streak, Sheamus lifted the gold after hitting the Brogue Kick on Bryan in exactly the same manner as he beat Kingston in the KOTR tournament, as Bryan dove from the top.

Sheamus changed his attire from the Irish green, white and gold outfits to red, white and blue whilst being U.S. Champion. His reign lasted until Extreme Rules when Kofi Kingston defeated the star in a Tables Match.

Around three years later on the May 5th 2014 Raw, Sheamus regained the title after he won a twenty-man battle royal by last eliminating champion Dean Ambrose. This win kick started an impressive 182 day reign with the strap, before he was beaten by an unstoppable Rusev that November.

Sheamus’ third taste of U.S. Title glory came as part of night two of WrestleMania 37 when he pinned Riddle to secure a popular title win, lifting the now redesigned championship belt in the process. 131 days later at SummerSlam, Sheamus relinquished the title to Damien Priest.

Across three United States title reigns, Sheamus has clocked up 360 days as champion, making him eighth on the list of who have held the title the longest. 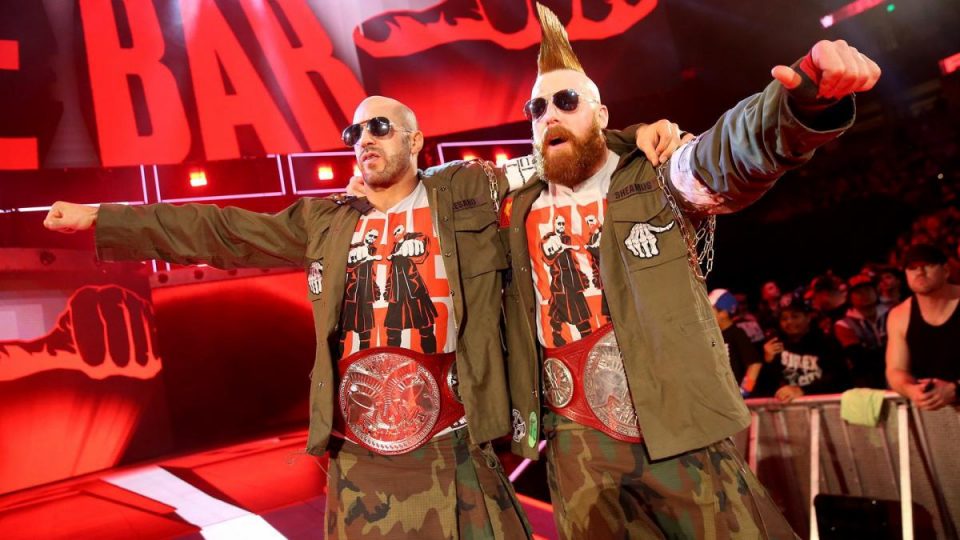 Having largely stayed away from tag team competition in his first few years with the company, Sheamus found himself at odds with Cesaro in 2016. Following a cracking best of seven series between the two, then Raw General Manager Mick Foley thought that the pair would be better off together as a team.

Following a rocky start, the pair would go onto to become one of the best tag teams of the last decade and would lift the Raw Tag Team Championships on four occasions, defeating the New Day, the Hardy Boyz, Dean Ambrose and Seth Rollins and Jason Jordan and Seth Rollins to capture the gold across the span of just over a year. Known as ‘The Bar’ the team had a great look, matching their trunks and entrance alongside their undeniable chemistry in the ring that really helped them develop the team and elevate the bar in the tag team division.

The pair held the gold across four reigns for over 230 days, although were dealt a disservice by WWE, losing the titles in their last reign to Braun Strowman and ten-year-old boy Nicholas!

After being drafted to Smackdown as part of the Superstar Shake Up, ‘The Bar’ would also lift the blue brand’s tag title, defeating the New Day before dropping the belts to Shane McMahon and The Miz at Royal Rumble 2019.

Sheamus suffered a concussion shortly after WrestleMania 35 and with Cesaro being drafted to Raw shortly thereafter, ‘The Bar’ was unfortunately no more.

An impassioned speech afterwards on the SmackDown LowDown has set the tone for Sheamus, as he hyped up the importance of him winning the title, wanting to become a Grand Slam Champion and the first ‘Ultimate Grand Slam Champion’ in WWE history.

And what better place to do it, in front of over 60,000 fans just a stone’s throw from Dublin were his journey began.

Don’t bet against him doing it either. Gunther vs Sheamus should be a cracking hard hitting bout that has the potential to steal the show come Clash at the Castle. The pair will undoubtedly feel the weight of the SummerSlam 1992 Intercontinental Title bout’s shadow hanging over them, but they have the chance to create their own Intercontinental Title bout legacy. The pair could conjure up their own classic on September 3rd that could see Sheamus lifting that illusive title belt, making history come the end of the match.