The Royal Rumble is one of the most anticipated event’s on WWE’s annual pay-per-view calendar. Each January, 30 men and women have a golden opportunity to win the Royal Rumble match and earn a World Championship bout of their choosing at WrestleMania.

In the 33 year history of the Royal Rumble match, only eight wrestlers have won the match on more than one occasion. This features lists every single one. 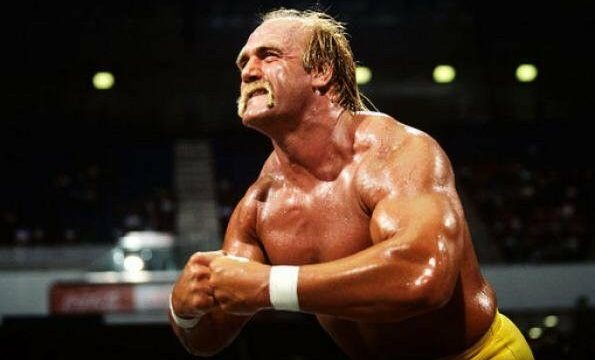 Hulk Hogan was the first wrestler to win multiple Royal Rumble matches. He was also the first man to win consecutive ‘Rumble bouts.

‘The Hulkster’ ejected six men from the bout en route to victory in the 1990 Royal Rumble match-up. He last eliminated Mr Perfect to win the contest.

The following year, Hogan repeated the feat. He eliminated seven competitors including Earthquake. Hogan’s elimination of the big man earned him his second ‘Rumble win and finally drew a line under their long running feud.

Michaels famously entered the 1995 ‘Rumble as the number one entrant and outlasted the entire field to win the match-up by last eliminating The British Bulldog, who had entered the bout as the number two entrant.

However, HBK did eject an impressive eight participants to win the bout. Michaels successfully cashed in his title shot and dethroned Bret ‘Hitman’ Hart to win the WWF Championship at WrestleMania XII.

Stone Cold Steve Austin is the only wrestler in history to win the Royal Rumble match three times.

His first win was mired in controversy, as the ‘Rattlesnake’ who had entered the bout at number five and had eliminated a then-record 10 opponents, had been ejected by Bret Hart.

However, the referees were distracted by a ringside brawl between Mankind and Terry Funk and missed his elimination. Stone Cold snuck back in and ejected Vader, The Undertaker and Hart to win the contest.

There was no controversy about Stone Cold’s second ‘Rumble win the following year. Stone Cold ejected seven participants and last eliminated The Rock to earn the right to face Shawn Michaels at WrestleMania XIV.

‘The Bionic Redneck’ made it a hat-trick of ‘Rumble victories when he claimed victory in the 2001 Royal Rumble match by clotheslining Kane over the top rope.

Stone Cold moved on to WrestleMania X-7 and shockingly joined forces with WWF Chairman, Vince McMahon, screwing The Rock out of the WWF Championship in the process.

Triple H received a hero’s welcome, when he returned to the WWF after an eight month absence on the January 7, 2002 Raw. It was therefore little surprise when his return resulted in a victory in the 2002 Royal Rumble match.

‘The Game’ last eliminated Kurt Angle to win the bout and earn a crack at Chris Jericho’s Undisputed Championship at WrestleMania X-8.

14 years would elapse before Triple H would emerge victorious in another Royal Rumble match-up. ‘The Cerebral Assassin’ entered the ‘Rumble match as the number 30 entrant. Atypically, the WWE World Title was at stake in the 2016 Royal Rumble.

Triple H dumped out defending champion, Roman Reigns and Dean Ambrose to win his 14th World Championship. ‘The Game’ would drop the belt back to Reigns at WrestleMania 32. 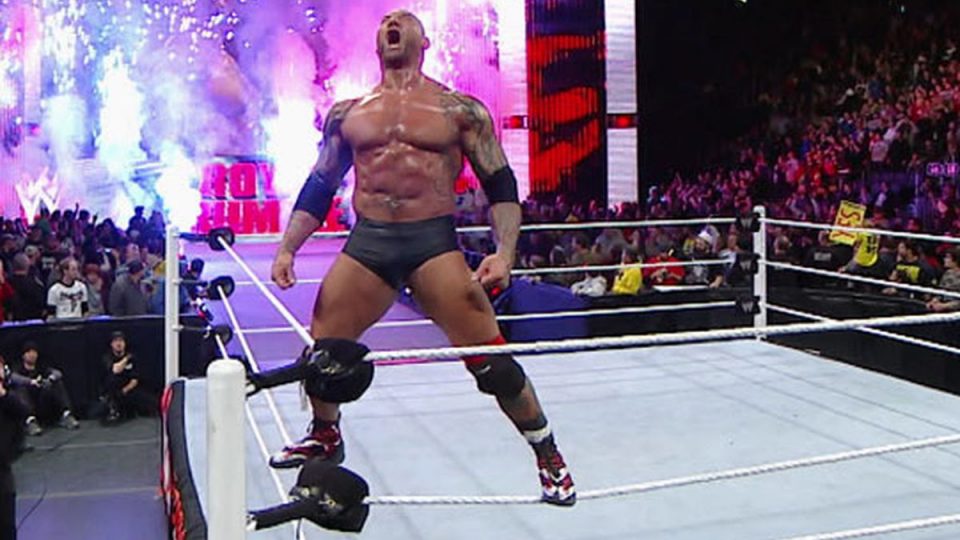 Batista heard deafening cheers when he dumped John Cena over the top rope to claim victory in the 2005 Royal Rumble. Despite being a member of WWE’s premier heel faction, Evolution, fans were desperate for ‘The Animal’ to dethrone his leader, World Heavyweight Champion, Triple H.

WWE fans would get their wish. After a long, episodic storyline, Batista grew disaffected with ‘The Game’ and when he overheard Triple H badmouthing him to fellow Evolution member, Ric Flair, Batista made his challenge to Triple H.

He would wrestle his former buddy for the gold at WrestleMania 21.

‘The Animal’ bested Triple H at WrestleMania to win his first World Championship.

At the 2014 Royal Rumble, fans were supposed to cheer returning hero, Batista. However, he was booed out of the building before, during and after he flung Roman Reigns over the top rope to claim his second ‘Rumble win.

Such was the ferocity of the crowd response, Batista was turned heel and was forced to share the WrestleMania main event with the WWE Universe’s choice of hero in Daniel Bryan.

John Cena shockingly returned to WWE months ahead of schedule after injury, as the surprise number 30 entrant in the 2008 Royal Rumble.

Cena last eliminated Triple H to win the bout and a title opportunity. Atypically, Cena cashed in his shot early, at No Way Out! but failed in his quest to wrest the belt from Randy Orton.

Five years later, Cena repeated the feat. He last eliminated Ryback to win the 2013 Royal Rumble. That earned him a return match with The Rock at WrestleMania in a re-match of their battle at WrestleMania XXVIII at ‘Mania 29.

This time the pair rumbled over the WWE Championship. On this occasion, Cena did win the gold. He pinned ‘The Brahma Bull’ to claim the belt.

Randy Orton was a man under pressure when he entered the 2009 Royal Rumble. Orton had punted WWE Chairman, Vince McMahon on the pre-‘Rumble Raw and chances are the ‘Rumble was his last night as a WWE employee.

However, Orton earned himself a temporary reprieve by last eliminating Triple H to win the ‘Rumble and earn a title shot at WrestleMania 25.

In 2017, ‘The Viper’ won his second ‘Rumble match-up by last ejecting Roman Reigns. Unlike at WrestleMania 25, when ‘The Apex Predator’ came up short in his title challenge to Triple H, Orton got the job done at WrestleMania 33 when he pinned Bray Wyatt to claim the WWE Championship. 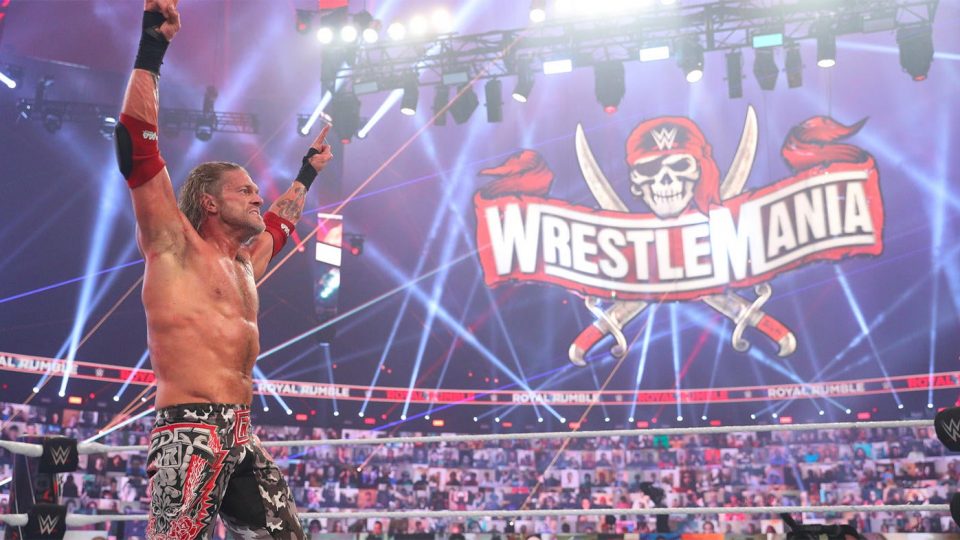 Edge has won two Royal Rumble matches but is the only wrestler on this list who has failed to win any of his WrestleMania title matches earned by virtue of his ‘Rumble victories.

His first win came back in 2010, when a returning Edge shockingly entered the bout as the number 29 entrant and last eliminated John Cena to claim victory.

Unfortunately, ‘The Ultimate Opportunist’ was unable to take his opportunity and wrest the gold away from World Champion, Chris Jericho at WrestleMania.

11 years later and Edge would claim his second ‘Rumble win. Edge became the third man to win the Royal Rumble match from the number one position.

However, his hard work was in vain once more, as he came up short in his WrestleMania title match. Roman Reigns retained the Universal Championship at WrestleMania 37 by simultaneously pinning Edge and Daniel Bryan in their Triple Threat main event.

When Brock Lesnar threw Drew McIntyre over the top rope on January 29th 2022, he won the Royal Rumble for a second time. On the night, Lesnar entered at number 30 and demolished everyone in front of him in double-quick time. With his second victory, The Beast set a couple of notable records. He set the record for the least amount of time in the match before winning, and the longest gap between Rumble wins.

After his Rumble triumph, Lesnar set his sights on Universal Champion Roman Reigns, and after winning the WWE Title at Elimination Chamber, the pair met with all of the gold on the line at WrestleMania 38. However, it proved to be a rough night for Lesnar who was defeated by Reigns once again.

Although, Lesnar’s first win in 2003, ended in a much happier WrestleMania moment. After overcoming the Big Show early in the event, Lesnar entered the Rumble match at number 29. After bulldozing his way through his rivals, Lesnar eliminated The Undertaker last to claim the win.

At WrestleMania, Lesnar defeated Kurt Angle to become WWE Champion for the first time, via a memorable, and missed, Shooting Star Press.

You can watch all of these Royal Rumble matches exclusively on the WWE Network.