Ahead of an uncertain WrestleMania season beginning at the Royal Rumble, WWE dropped a bombshell on last week’s SmackDown by announcing several of the female participants for the 2022 Women’s Royal Rumble.

Some of which included returning surprises such as Lita, Kelly Kelly, and Summer Rae, one name stood out among the pack. IMPACT Knockouts Champion Mickie James.

The shock surrounding this announcement was instantly felt throughout the wrestling world, as WWE’s open acknowledgment of IMPACT Wrestling proved the latest and most unpredictable opening of the ‘forbidden door’, which has grown to be a catch-all term for the increasingly surprising co-operation between major wrestling organisations.

Such shock soon turned to excitement when a report emerged that WWE were considering an ‘unexpected’ forbidden door entry to the 2022 Men’s Royal Rumble to follow on from the buzz created by the Mickie James announcement.

Speculation has become rife on social media discussing who this entry could be, from the improbable to the less unexpected, with the extent of WWE’s commitment to the forbidden door still very much in question.

Nevertheless, if there was any time for wild fantasy booking and speculation to run wild, it’s Royal Rumble season, so in the spirit of the Rumble, let’s run down five potential forbidden door entries to the 2022 Men’s Royal Rumble Match. 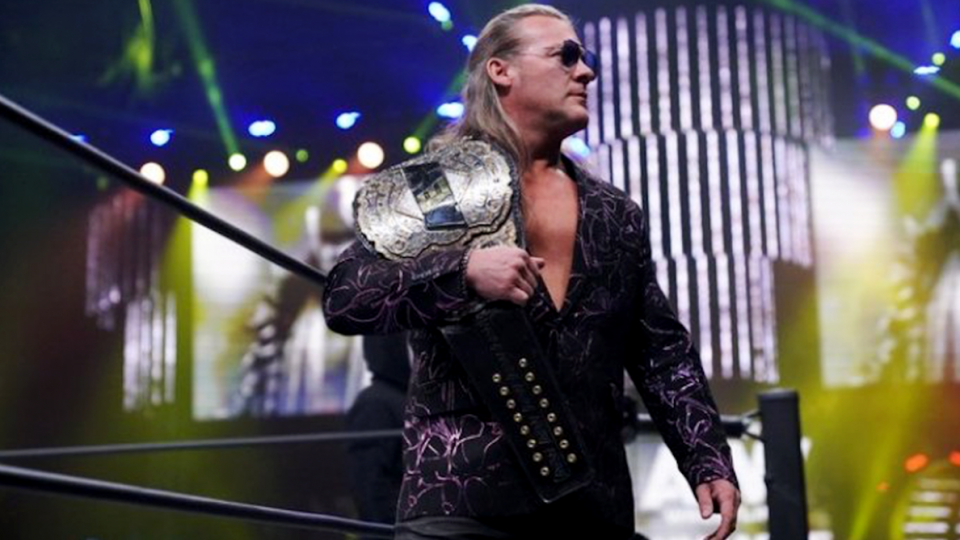 Let’s start obvious shall we, with ‘Le Champion’.

Chris Jericho is a WWE legend who has previous with the forbidden door, having entered New Japan Pro Wrestling under earth shattering circumstances against Kenny Omega in 2018, and by appearing on Steve Austin’s Broken Skull Sessions just last year.

While Jericho is currently flying the flag of All Elite Wrestling, with the odd WWE shot and chip on his shoulder after revelations of his frustrations from his last WWE run, Jericho is without a doubt one of the most obvious and reasonable guesses for any forbidden door entry to the Rumble.

His aforementioned galavanting in and out of the forbidden door and overall good will departure from WWE makes it likelier than most, and the prospect of hearing ‘Judas’ blasting on his way to the ring would be a surprise greater than any of Jericho’s legendary debuts or returns.

Furthermore, while we’re speculating, this could add an interesting wrinkle to his currently ongoing AEW story with Eddie Kingston. Kingston, claiming Jericho doesn’t care about his friends in the ‘Inner Circle’ and in need further ammo to place in the chamber, could get all the ammo he needs by having Jericho enter the Royal Rumble.

The idea of Kingston cutting scathing promos on ‘Y2J’ for touring with Fozzy and returning to WWE while he, Santana & Ortiz have been battling Daniel Garcia and 2.0 is one where everyone could win from a one-off Rumble appearance for Jericho.

Whether such a deal between WWE & AEW could be brokered is another story, but this is the ‘forbidden door’, and a great Rumble surprise knows no bounds. If anyone could do it, it’s Chris Jericho.

Another case of WWE’s flirting with the ‘forbidden door’ has been with New Japan Pro Wrestling, when discussions surrounding Bryan Danielson’s contract were being had prior to his AEW debut in September.

While said negotiations went south and NJPW have primarily worked with IMPACT and AEW since, connections between the companies have long been the talk of the town in wrestling circles, and further co-operation aren’t out-with the realm of possibility.

Modern examples such as Jushin ‘Thunder’ Liger’s Takeover: Brooklyn cameo in 2015, AJ Styles, The Good Brothers, and Shinsuke Nakamura’s switches in 2016, or Chris Jericho’s cross-promotional appearances in 2018, WWE and NJPW have shown a willingness to work together in the past, with WWE’s focus on NJPW talent being a key part of this.

One star said to be the apple of WWE’s eye for a long time has been ‘Switchblade’ Jay White.

This time last year, speculation was rife of WWE’s interest in White, who had teased leaving New Japan following a Wrestle Kingdom defeat to Kota Ibushi. This interest was later confirmed by White himself, and who’s to say the interest doesn’t remain.

Perhaps a one-off appearance for the ‘Switchblade’ in the Rumble could give WWE and it’s fans a taste of the future if both come to pass down the line, and White’s recent links to IMPACT could give further credence to the idea of White cutting his way through the Rumble field.

It’s an outside bet, but one to keep an eye on. 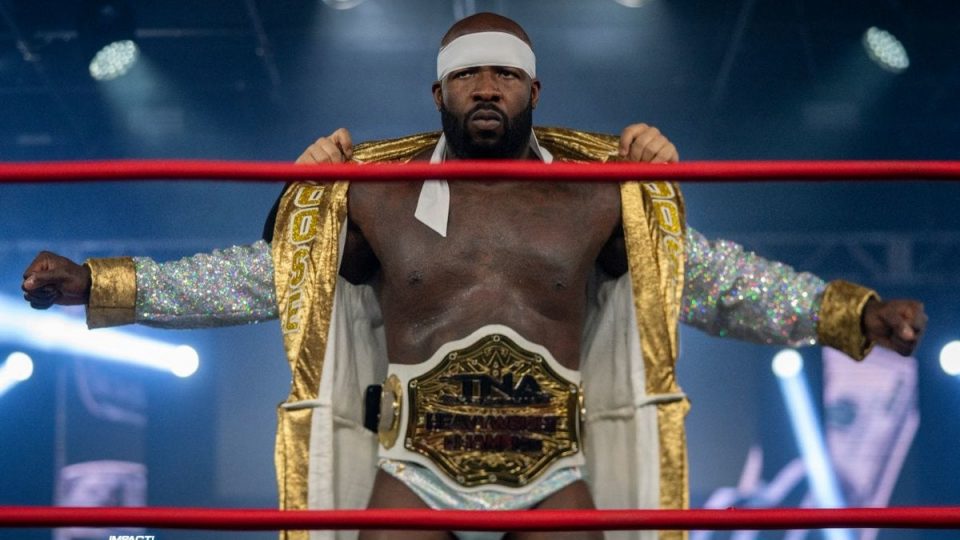 Another IMPACT talent who has thrown their name into the hat for some ‘forbidden door’ action is the current IMPACT World Champion Moose.

Soon after the Mickie James announcement, the ‘Wrestling God’ called out WWE Universal Champion Roman Reigns for a tantalising Champion vs Champion bout that only the ‘forbidden door’ could provide.

While Roman finds himself largely tied up with Brock Lesnar and Seth Rollins at the moment, Moose could still find a way to get himself in the ring with ‘The Tribal Chief’. That’s by, you guessed it, winning the Royal Rumble.

While winning the bout maybe a stretch further than even entering the thing, the presence of the IMPACT World Champion in a fashion similar to the IMPACT Knockout’s Champion entering the Rumble could help provide a sense of extra prestige to a bout that associated with earning a title opportunity, rather than featuring champions themselves.

Another outside bet, but as one of the few wrestler’s who have made their feelings on the ‘forbidden door’ known ahead of the Rumble, Moose’s presence in the Rumble as part of WWE’s newfound relationship with IMPACT could be a bet safer than perhaps first thought. 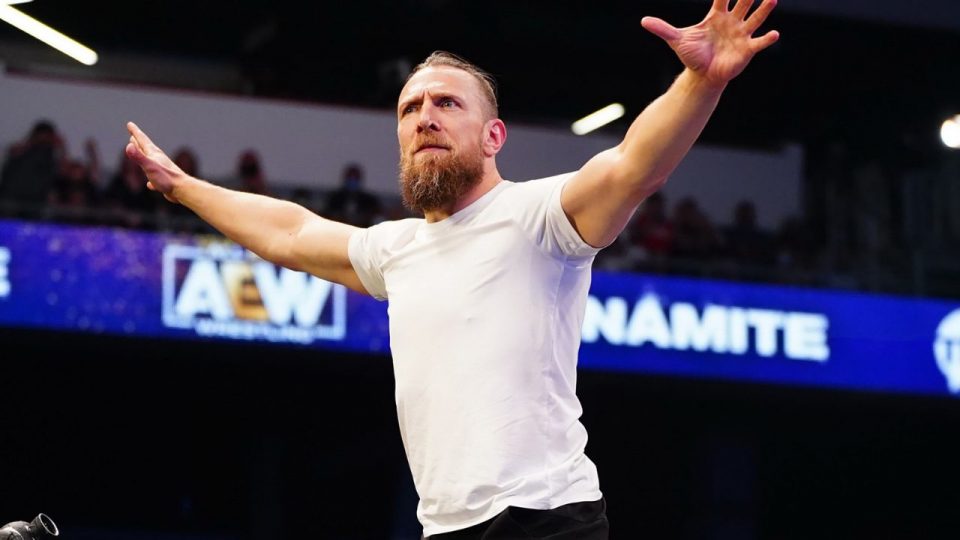 Another ‘obvious’ pick only held back by the continued contention with AEW, nobody has quite left the door for a WWE return as wide open as ‘The American Dragon’.

The pick of many 2021 Wrestler of the Year lists has already started his 2022 off with a bang following a stellar rematch with ‘Hangman’ Page for the AEW World Championship, and a Rumble return could be the next step for Danielson to stake his claim as the best wrestler of 2022 thus far as well.

A WWE mainstay as recently as last April, a Rumble appearance could come with the added motivation of getting another crack at Universal Champion Roman Reigns, who’s victory over him banished him from the company in storyline last year.

Getting around the pesky ‘Daniel Bryan’ to ‘Bryan Danielson’ rebrand could be the biggest obstacle preventing this appearance, but with someone like Danielson who has such respect and fanfare, as well as his own peculiar history with the Rumble match itself, this return would be another to blow the room off the place come January 29th. 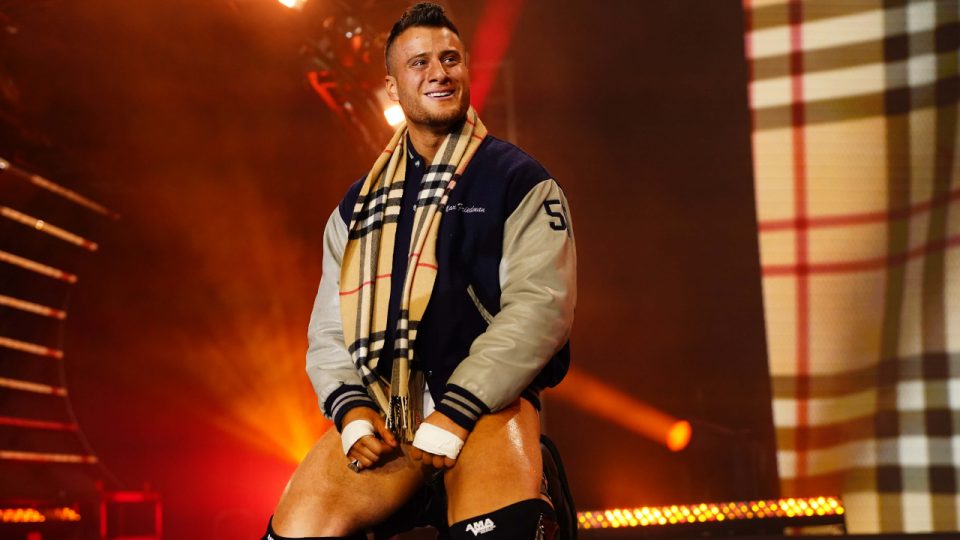 Hear me out on this one.

Obviously the likes of Jericho and Danielson are more likely than an MJF to enter the Rumble, but the more you think about it, the more this appearance could be the best for all parties.

‘The Bidding War of 2024’ has become wrestling canon as MJF’s persistence that he is unhappy in AEW amid unfair treatment from Tony Khan has led to him considering the grass may be greener over in Connecticut. Or in this case, St. Louis.

A bubbling blood feud with CM Punk has added further fuel to this particular fire, and a Rumble appearance from MJF would be perfect in adding the right kind of tension to MJF’s head-canon, his feud with Punk, and in making MJF just much bigger a scumbag to the AEW faithful.

The boos would (hopefully) be deafening as MJF walked to ring with the biggest s*** eating grin on his face as he walked to the ring for the Rumble, and a retread of the 2005 Muhammad Hassan spot wouldn’t go amiss as the ring became aware of the outsider in their midst.

I’d originally considered Wardlow for this spot, given WWE’s documented interest in MJF’s bodyguard, but a Wardlow appearance alongside MJF to ensure he remains in the Rumble throughout would be another fun continuation of AEW’s story beats within a WWE ring.

And unlike other dream picks for the Rumble like a Kenny Omega or Jon Moxley, this is perhaps the most likely and most compelling dream pick WWE could put together for the Rumble.

Of course, this all remains to be speculation, but that’s the beauty of Rumble season, and by extension, modern pro-wrestling. For all the cross-promotional shots fired and toxic fanbase debates, the best moments in modern wrestling happen when everyone comes together for the sake of a magical moment.

And I think we’d all be in agreement in acknowledging the potential of a ‘forbidden door’ entry into the 2022 Men’s Royal Rumble Match as one of those magical moments that’d be worth casting aside any wrestling related beef for.